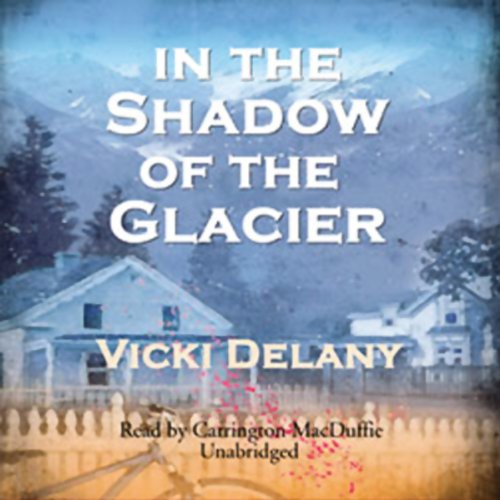 In the Shadow of the Glacier introduces a new traditional mystery series set in a bucolic mountain town in British Columbia and featuring young constable Molly Smith.

Trouble is brewing in the small town of Trafalgar. Constable Smith nearly stumbles over a body, the victim of a murder. The deceased was a highly unpopular newcomer who had big plans for developing a luxury resort outside of town.

Smith throws herself into solving the case, in part to build her career on the force and to win the approval of her parents. She is also hoping to impress her new supervisor, Sergeant John Winters, newly arrived from the city of Vancouver, who has brought along his own set of personal problems.

©2007 Vicki Delany (P)2007 Blackstone Audio Inc.
"[An] intriguing series opener....Delany carefully sets up the conflicts, resolving most but not all in anticipation of the next assignment, and begins what looks to be some extensive character development." ( Publishers Weekly)

Quirky Start To A Mystery Series

The story for this first book in a new to me mystery series was good. I really liked the strong sense of place Delany created depicting British Columbia and the small town setting of the book. The characters were unusual and held my interest. I wouldn't call it actually charming, but it was a good start.

The problem for me was with the narration. It almost ruined the book. The whiny ten year old child's high pitched voice used for almost all of the female characters was just one half step away from terrible. A waste because I will probably pass on the rest of the series. I would suggest a serious listen to the sample before buying the book.

Left in the cold

I am an avid reader/listener but have never written a review until now. This book was so unfortunate it required comment. The writer shows some promise but has no life experience or perhaps has just not done her homework. The characters aren't charmingly odd but rather flat and predictable. The main character is too foolish to be taken seriously as a police officer. She comes off as something of an idiot rather than the disarmingly naive new constable the writer is attempting to portray.

Quite often a good narrator can elevate a story but in this case the reader/narrator has selected a tone and cadence for the female characters that makes them sound as if they are 10 years old and not particularly bright. I usually enjoy a good village mystery with quirky characters but this one left me cold.

Vicki Delany was a new author for me and I must say I enjoyed these books very much. I only wished that they had been numbered so that I had read them in order not that it mattered with the particular murder but the thread running through the books would have been more understandable. I find this often with books in a series especially when you don't have that had copy of the inside of the book showing the titles and the order in which they were published. Still that aside the books are great the story line interesting and the reading excellent.

As a rabid fan of Louise Penny's Three Pines books, I was drawn to this because of its setting in a small Canadian village. Though the similarities are mostly superficial, I found myself thoroughly won over by the characters. The storyline is entertaining, though not particularly surprising. I was surprised by how slyly this book drew me into its atmosphere. A fine start to a charming new series.

This is a well written realistic mystery. The characters are believable and engaging. I look forward to the next book in this series.

Molly Smith works as a constable in Trafalgar, British Columbia despite her hippy upbringing in In the Shadow of the Glacier by Vicki Delany. The hitherto peaceful city is set aflame when Molly discovers the body of Reg Montgomery, who is trying to create a major development decried by environmentalists and who is the first murder victim in Trafalgar in over a year. Assigned to assist Sergeant John Winters with the investigation in the absence of Winters's regular partner, Molly finds herself embroiled in the case personally when her parents become involved. A muckraking journalist trying to stir up trouble edits an interview with her mother, Lucky, to damage opponents of the development and supporters of a peace garden dedicated to those who stood up for peace by moving to Canada during the Vietnam War. This then causes activists to descend upon Trafalgar, creating serious havoc and further violence. So the pressure is on for Molly and Winters to solve the murder.

I selected this book because I love the Sherlock Holmes Bookshop Series by Delaney and hoped to enjoy this book as much. Sadly, I was disappointed. The description did not indicate just how much turmoil and bad language would be in this book. One thing that impressed me about the Holmes series is the way Delany deals with serious content in a clean and straightforward manner without too much descriptions of violence. But this book had significant depictions of violence and lots of bad language. I felt that this book acted somewhat unfairly too because it began with no bad language but began to drop the F-bomb after close to half the book was over, becoming more and more frequent in its use of bad language as the book continued further. Had I realized just how much bad language I would have to listen to, I would not have started this book.

Carrington Macduffie narrates the audio edition of this book. She does a good job of performing the roles of each character, with what I think are realistic Canadian accents. And she does a fantastic job of making the muckraking journalist sound really filthy. The voices used for each character suits them each.

I completed In the Shadow of the Glacier because by the time I realized just how different this book was from what I expected, I had invested too much time in the book and decided to finish it. The last couple chapters became dramatic, with a surprising conclusion. But they didn't redeem the rest of the book, which I give two stars.

A Good First Book in a Series

I enjoyed this book very much and will be interested in more by this author. And I mostly enjoyed the slight Canadian accent the reader has. She did a very acceptable job of differentiating between characters. My only real quibbles are, sadly, probably the result of the reader and author being Canadian. The first really is a small quibble -- the reader mispronounced the name of Jon Benet Ramsey. Considering the wall-to-wall coverage of the case off and on over the years, it just grated on my ears. Second, the author seems to not understand the way many American people would feel about the Peace Garden under discussion for most of the book. Yes, there are people here who would feel as she expects, but many more of us would find the whole thing to be a big tourist attraction! As an American, that annoyed me.

In the book's favor, I was more than half-way through before I spotted the first clue as to who the culprit was and it was a great deal longer than that before I untangled who had committed which crime and why. That's a *good* thing.

I found myself liking the main characters, even when I disagreed with them, which is fairly unusual, so I will be when more books in the series are released. An excellent beginning to a series!

The book is O.K., but the narrator is awful!

Perhaps the bad reviews of this book are a product of the most unfortunate narrating I've ever heard on an audiobook. As one reviewer says, she makes everyone sound 10 years old--no, SHE sounds 10 years old! No inflection, no nuances. Why on earth did anyone hire her to read books? If there is a sequel to this book, please, please, get one of the many narrators who can actually narrate!

Wow, this book was bad, I didn't even go past part two. I listened to better writing in my English 101 classes in collage. The descriptions where as basic and uncreative as anything I've ever read and the characters were clich? after clich? . . . the weight lifter was big and dumb, the small town reporter was naive, the big city reporter was smart but bad . . . and the worst character of all is the main character. A shy, easily embarrassed, whimpering woman police officer with no backbone (no department in the world would ever hire her). It was so irritating to even listen to I go angry just thinking about what the author was thinking about when writing this book. Apparently everyone in Canada (in this book, anyway) is kind of slow and/or uber liberal.

The Narrator sounds like Howard Kosel and the voices she uses make everyone sound like they are 10 years old. I've listened to about 3 dozen books now and this one was the worst.

Listened to as much as I could tolerate....

I really find it annoying when characters (especially protagonists) act stupidly. A good writer should be able to move the plot along without using that as a device. Narration ok, except that too many of the female characters sounded exactly the same.