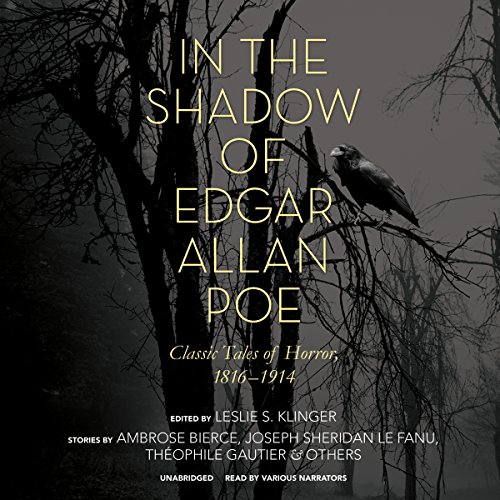 In the Shadow of Edgar Allan Poe

A masterful collection of horror fiction by widely acclaimed authors whose contributions to the genre have been lost in the shadow of Poe. Edgar Allan Poe did not invent the tale of terror. There were American, English, and continental writers who preceded Poe and influenced his work. Similarly, there were many who were in turn influenced by Poe's genius and produced their own popular tales of supernatural literature. This collection features masterful tales of terror by authors who, by and large, are little remembered for their writing in this genre. Even Bram Stoker, whose Dracula may be said to be the most popular horror novel of all time, is not known as a writer of short fiction.

Distinguished editor Leslie S. Klinger is a world-renowned authority on those twin icons of the Victorian age, Sherlock Holmes and Dracula. His studies into the forefathers of those giants led him to a broader fascination with writers of supernatural literature of the 19th century. Includes stories by Ambrose Bierce, Joseph Sheridan Le Fanu, Theophile Gautier, Charlotte Perkins Gilman, Arthur Conan Doyle, Lafcadio Hearn, M. R. James, Bram Stoker, and many others.

This is a great combination of short stories, authors and narrators. Just what I expect from a quality horror collection.

Needed to be louder. had the earbuds at max, but overall recommended. Gets better towards the end.