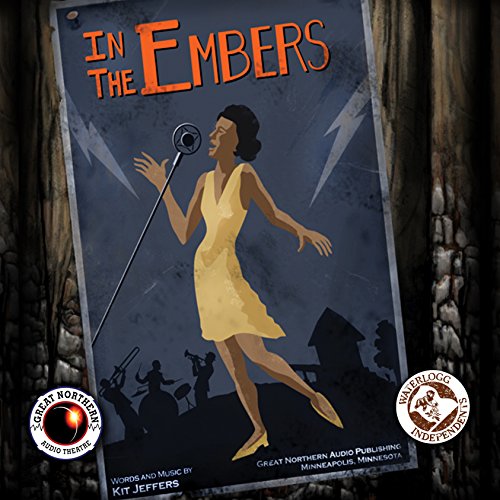 In the Embers: An Independent Feature-Length Audio Drama by Brian Price and Jerry Stearns

A song, a pressed flower, and the sound of two girls' voices recovered from a burned wooden beam by using a brand-new laser technique to read a charred surface like the grooves of an old 78 rpm record. These are the clues that archaeologist Digger Morgan discovers while working on a routine dig at a Maryland plantation. Who were the girls? When was the fire? The answers all lead to 1920s jazz pioneer Kit Jeffers, whose voice mysteriously appears on Digger's computer and whose existence remains haunted by a singular tragic event.

With the sound design, rhythm, and detail of an independent film, In the Embers stars Audie Award winner Robin Miles and features an original score, inventive sound effects, and a fine ensemble cast.

Bonus tracks: music from the production and interviews with the cast.

©2015 Brian Price and Jerry Stearns (P)2015 Great Northern Audio Theatre Productions, in cooperation with Waterlogg Productions
Poliziesco
Mostra di più Mostra meno
"The story is excellent, the music is excellent, the audio quality is excellent, and so are the actors. This is a drama that goes in the permanent collection." (Scott Danielson, SFFaudio.com)
"Fascinating story, with some terrific performances." (Stefan Rudnicki, actor and narrator)

The story itself was only an hour, how did they fill the next two hours with music and commentary? The story was cute, but really seems to take itself too seriously by adding all that filler at the end.

I normally don’t write reviews because most of the audiobooks I listen to are pretty good but I had to make an exception here because this audiobook is horrible. It’s short, poorly written, poorly mixed and poorly acted. It’s completely anti climatic and the making of the audiobook is longer than the actual audiobook. Whenever the lady sings it’s mixed so much louder than the dialogue I had to turn it down and then back up again once the “actors”, more like local playhouse fare, started talking. Pass, pass and pass.

What disappointed you about In the Embers?

I know the idea was to provide authenticity, but the scratching and the extended 78-record sound quality, listening to this on headphones, was torture. I hung in for an hour and gave up. It's not the performers, it's the recreation of the sound of the era in the song segments and the fade-in-and-out effects and 'authentic' scratching the accompanies it that is just too much. I use Bose earphones, so it's not the listening equipment


Since noticing that ‘In the Embers’ won best Audio Drama in the 2017 Audie awards, I’ve been curious with this release. Surely it must be pretty special to surpass Dirk Magg’s, much hyped, Alien: Out of the Shadows which was also in the category.

Whilst far-fetched, but aren’t most stories, it hooks your attention for being different though I am disappointed with its shortness. With the total length of 3hrs 35 minutes, including bonus music + interviews with the cast, how long would you expect it to be? Nope. Just 1 hour 20 minutes.

In the Embers audio drama (80 minutes)
Includes 3 original songs from the story (7 minutes)
The making of, documentary (70 minutes)
Interview with the writers - podcast (60 minutes)

It isn’t perfect, but I applaud the writers for telling such a creative story. And at only 80 minutes long, one I will be listening too again.