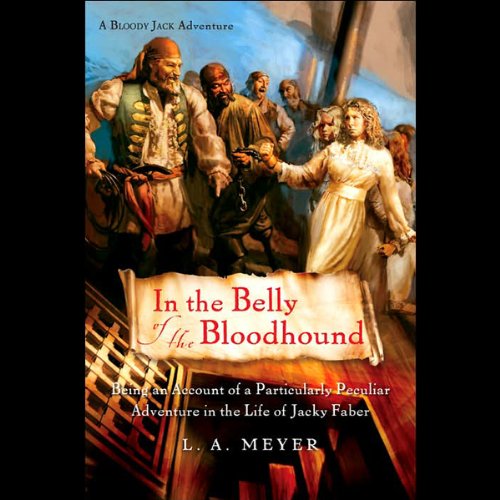 In the Belly of the Bloodhound

In the fourth book of the Bloody Jack series, Jacky Faber, having been called a pirate and had a price put on her head by the King of England, has no choice but to stay out of sight.

Hoping for a safe hiding place, she returns to the Lawson Peabody School for Young Girls in Boston, but the calm doesn't last long.

On a class field trip to Boston Harbor, the girls are abducted and forced into the hold of the Bloodhound, a ship bound for the slave markets on the Barbary Coast where they will be put up on the auction block and sold into Arab harems.

Jacky wouldn't dream of going down without a fight, but the delicate Lawson peabody girls are in over their heads. Although Jacky will use anything in her arsenal to help her well-heeled classmates, she isn't so certain they will find the strength and courage needed to survive. But if she can convince them to trade petticoats and propriety for her daring escape plan, the girls just might become their own rescuers.

Cosa pensano gli ascoltatori di In the Belly of the Bloodhound

Loved it! Loved them all.

I've been a member of Audible for three years now and this is only the second time I have purchased books over and above my 2 credits a month. My credits went to the second and third books in the Jacky Faber series, Curse of the Blue Tattoo and Under the Jolly Roger, and when finished those mid month, I immediately purchased the fourth, the Belly of the Bloodhound.

Since I couldn't stop listening to how the Lawson Peabody girls were planning to escape the Bloodhound, sadly I finished it four whole days before new credits enter my account to continue my adventures with Jackie Faber. No worries, the fifth book, Mississippi Jack is downloading as I write and Ill have credits for book six.

Why am I telling this...to warn my mates that these tales will capture you and nothing short of good keel hauling will stop you from listening.

Renewed my interest in the series

STORY (historical fiction - 1800s) - I enjoyed the first three books in the series but, to be honest, things are getting a little formulaic and I was planning to give up on Jacky after finishing this last book in my library. Wrong! This one is my favorite so far!

Jacky and her friends from the girls' school are taken prisoner aboard the Bloodhound, a slave ship bound for Africa. While the circumstances are bleak, Jacky's incredible bravery and spunk keeps the girls alive and hopeful. I thoroughly enjoyed her resourcefulness and cleverness as she led them in survival and to their ultimate escape. Bravo, Jacky! (And you will absolutely LOVE the Christmas story Jacky tells to the girls one evening before bedtime).

PERFORMANCE - I always enjoy Katherine Kellgren's performances, and this one lives up to her reputation. She is a bit "over the top" with her accents and enthusiasm, but it makes for a great listening experience. I was able to listen to the whole book at 1.5 speed, as she reads a bit slowly.

OVERALL - Recommended for all listeners over about age 17. (As usual, I disagree with Audible's categorization of this as a book for teens). There is no sex, though there are a few slightly bawdy scenes. There is a bit of violence. I don't recall any cussing. The story stands alone, but each book in the series picks up where the last one ends, so you will miss that history if you start with this book.

This is yet another fantastic book in the "Bloody Jack" series. The second I finished #3, I rushed in to get this one. Be warned though: there is quite a bit more sexual content in this book than in the others. The girls are to be sold as sex slaves, and one is judged as "a fine specimen to warm a sultan's bed." While no sexual activity actually takes place it is mentioned in the book frequently.

As usual the narration of this book is out of this world and makes the adventures of "Bloody Jack" so much more exciting than just reading it. I think everyone should hear this series instead of read it!

I love the Jackie Faber books and have enjoyed each of the books in the series. This one was my favorite since the first in the series. It brings the characters from the Lawson Peabody to the sea and allows for excellent character development, particularly of Clarissa Howell and her friends. The plot is more focused than some of the other books have been and seems to have more new elements than the second and third books in the series did.

This was my favorite book in the Bloody Jack series. I don't know if it was because of the book or the narrator that made it so good. That narrator made Jacky Faber come alive! Excellent!

A different kind of adventure

What made the experience of listening to In the Belly of the Bloodhound the most enjoyable?

Katherine Kellgren totally is Jacky. Her narration makes the series!

What other book might you compare In the Belly of the Bloodhound to and why?

I can't help comparing it to the other books in the series. The events, which I won't give away, seem harder to believe than in previous books, even those where Jacky commands a ship. They also might be more disturbing to young readers as the threat to Jacky and her friends is more graphic than in other books.

Interactions between Jacky and Clarissa show the development of their friend/enemy status. Clarissa gets to steal the show a couple of times.

Never underestimate the power of girls!

You need to read or listen to the series in order to really appreciate it and you have to hear it by Katherine Kellgren. Print would be a poor substitute!

Not the jaguar of L.A. Meyer's series but certainly a top notch breed of it's own. An interesting twist I never expected, a wonderful refocus on the evolution not just of Jackie but of her classmates. I can't wait for the next book! Kellgren as always a treat of a narrator. (Could there be a more perfect lady for this role?)

This book has some of the best advice to live by

If you’re this far into the series by now you don’t need to be told how wonderful Jacky is or how masterful Meyer was, rest his lovely soul. What I will say is how this book gave me some of the best advice for dealing with a problem. Cry your very heart out and then make a plan.

Third time thru the Bloody Jack adventure series, still loving it! Each time pick up something new. Narrator is beyond excellent