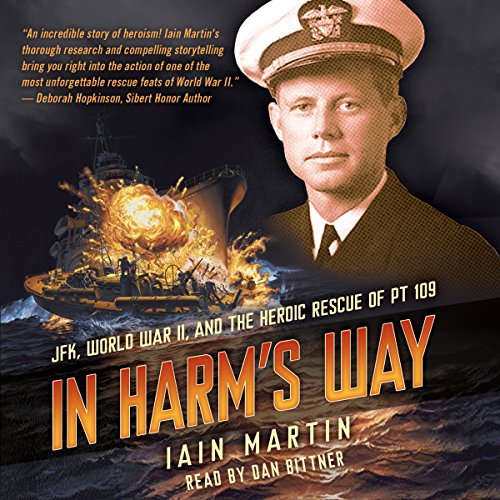 A thrilling true survival story that follows one of America's most beloved presidents, John F. Kennedy, as he fought to save his crew after a deadly shipwreck in the Pacific during World War II. In September 1941, young Jack Kennedy was appointed an Ensign in the US Naval Reserve. After completing training and eager to serve, he volunteered for combat duty in the Pacific and was appointed commander of PT 109.

On August 2, 1943, Kennedy's PT 109 and two others were on a night mission to ambush an enemy supply convoy when they were surprised by a massive Japanese destroyer. The unsuspecting Americans had only seconds to react as the Japanese captain turned his ship to ram directly into Kennedy's. PT 109 was cut in half by the collision, killing two of Kennedy's 12 crewmen and wounding several others in the explosion. In Harm's Way tells the gripping story of what happened next as JFK fought to save his surviving crew members who found themselves adrift in enemy waters.

It was a bit of a disappointment for me

I had high hopes for this book, but it was a little disappointing for me. It seemed like the narrator was overly excited and spoke too fast. The story of JFK and the PT 109 is an amazing part of our history, so I was anticipating something special. It fell short of that for me. Maybe I will try to listen again to see if it’s better the second time around.

I actually preferred the way the story is told in PT 105. Ha
F way through this book, I jumped back into PT 105 and listened to the story of PT 109 there.