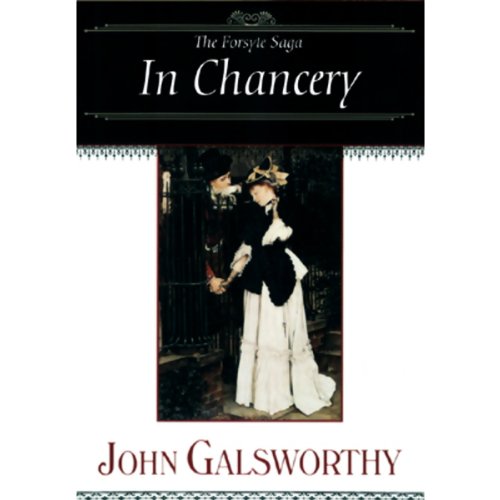 In Chancery, the second novel in John Galsworthy's epic social satire The Forsyte Saga, follows the events of A Man of Property.

After suffering the death of her lover and abuse from her husband, Soames, Irene Forsyte finally leaves her marriage for good. Though socially disgraced by her affair, she forms a bond with the late Old Jolyon, a father of the Forsyte clan who had grown distant from the family after reconciling with one of his outcast sons. The young Jolyon had been disinherited after divorcing his wife to marry a penniless foreign governess.

Now, with both his father and his beloved wife dead, the younger Jolyon finds himself drawn in sympathy to Irene, who was so dear to Old Jolyon in his final days. Their shared troubles blossom into a romance, to the horror of Soames Forsyte.

I've just finished the second volume and the story keeps getting better! One note about the recording: in the last hour of the recording there is some repetition of material just read and there seems to be a short section that's out-of-order. Might be best to have the book in hand for the last 10-15 pages.

This second installment of The Forsyte Saga didn't quite measure up to the first, The Man of Property, but I enjoyed it nonetheless. It is mainly taken up with the marital difficulties of the second generation; Soames's indecision over whether or not to divorce Irene, who left him twelve years earlier, and Winifred's decision to divorce her alcoholic, spendthrift, philandering husband, Monty Darty. In between we have second cousins Holly and Val falling in love and marrying against their parents' wishes, and Irene, Soames, and Young Jolyn each give love a second (well, in the case of Jolly, third) chance. I missed Old Jolyn and the aunts, and old James grumbles towards death with slightly less charm than previously. But alas, times are moving on: Queen Victoria has passed, and the flower of England are fading away in the first world war. Nonetheless, I liked In Chancery well enough to continue with the series.

Excellent: but note that end of file is incorrect

I will someday write a review of the full Case reading of The Forsyte Saga, which as you see by my ratings I think is outstanding, but just wanted to note here that the last "chapter" in this download ("Interlude") includes instructions to "turn the cassette over", deletes some material, and repeats two large sections of text, which destroys the beauty of the Interlude. Just a warning for those who do not have a printed copy of the book. This corruption was noted by Chad in Texas way back on 01-27-09, and Audible should fix this.

It is amazing how a book written so long ago is so current! Galsworthy catches all the small nuances of life and relationships and the narrator just adds to the enjoyment

The Forsyte Saga series starts off a little slowly at the beginning of "The Man of Property", then inexorably draws us into its world of complicated passions and motivations. David Case's inimitable narration brings the story into vivid life. Positively addicting!

Better than the first

I liked this Book 2 better than Book 1. However, you'll be lost if you don't listen to Book 1 first.

The saga continues. I wish it could go on forever. The narration is flawless, perfectly capturing not just the meaning, but the feeling, the mood, the character of the individuals. Poignant when needed, ironic and funny in the subtlest way where appropriate. Perfection.

Galsworthy Is Not Much Good

In P. G. Wodehouse’s short story, “The Clicking of Cuthbert” an up and coming novelist declares his admiration for Sovietski to a visiting Russian literary celebrity. “Sovietski no good”, pronounces the celebrity. Shifting his ground, the young writer allies himself with the school of Nastikoff. “Nastikoff no good”. After that, the young novelist’s reputation plummets so sharply that the girl who wanted to marry him marries Cuthbert instead.

I know how he feels. No, I haven’t lost my girlfriend. But I have been captivated by the Forsyte Saga. And after a brief
Google search I realize, like that young novelist, that “this was not a good thing to be”. Granted, Galsworthy may be "readable", but his prose is "too smooth". His characters are “creaky”. Their quandaries “no longer resonate with us”. Summing up, one critic comes close to echoing the Russian celebrity: “Galsworthy is not much good”.

Part of the critics’ sniffy disapproval has to do with the radical new way Virginia Woolf portrayed her characters’ inner life--apparently a literary watershed, leaving everything written before Woolf in the academic dustbin. The rest, I sense, is rooted in Galsworthy’s gradual transformation from a “near Socialist” to a writer who, “came to terms” with society and it's foibles. All I know is, I appreciate his evenhandedness: if Soames Forstye sees art primarily as an investment, his cousin June is just as seriously frivolous in her scorn for all successful artists and her promotion of unknown talent, her “lame ducks”, in hopes that they will become…successful. Both are, in their own grasping or progressive way, Philistines.

Be that as it may, if you want an engaging story that grapples with our fear of death and dissolution, the struggle to live unaided by any but the vaguest sense of faith (oddly enough, the children are the ones who bring God into conversations, not their elders), our innate need to perpetuate our name (the next best thing to immortality in a world without faith), and the double-edged issue of property (in all its forms, in all aspects of life), then you should enjoy this series. And if you want a narrator who derives every nuance from a sentence, serving each up in a way that’s a treat to hear, you can’t do better than David Case / Frederick Davidson.

David Case continues to read the Forsyte Chronicles beautifully. They are books that I have read 'on the page' many times and (so far) there has been nothing to jar against my impressions of the characters. His understated performance in a somewhat dry, drawling voice still makes me cry at the sad parts and laugh when Galsworthy makes pointed comments.
I'd have given five stars but for the poor editing: towards the end of "Awakening" a message about turning over the audio-cassette has been left in and section of the story is repeated.