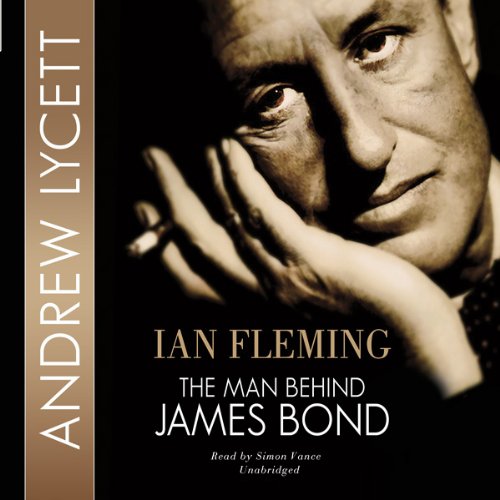 Sportsman, womanizer, naval commander, world-traveler, spy, this suave Old Etonian creator of the Cold War's archetypal secret agent was infinitely more complicated and interesting than his major fictional character, Agent 007. Fleming's wide-ranging and exciting life inevitably provided the plausible backdrop for the Bond novels, and while his temperamental, sometimes violent nature got him into difficulties as a young man, the second World War was the making of him. Highly regarded in British naval intelligence for his international contacts, he master-minded numerous top secret operations, including "Golden Eye," which is uncovered here for the first time. His role in shaping prototype CIA is also fully detailed.

This biography of Fleming is a well written and well read book, but the audio production quality is very poor. Often the loudness of the reading drops suddenly, causing you to have to turn up the volume and be deafened when the normal loudness returns, or the treble drops out and you're left trying hard to understand what little you can make out from the bass.

Pass on this book.

The book itself seems OK, and the narrator seems qualified, but when you can hear a narrator swallowing, coughing, turning pages, and when the sound level jumps on its own accord, its horrible for the listener.

The Man Behind Bond

Ian Fleming lived in a different world. He saw himself as someone who was always coming in second place, yet he rose to a greater fame than almost any of his many very famous friends. Lycett tells the story of James Bond's creator with tremendous depth and an appreciation for his subject. The idylic world Fleming created for himself - and how that world came crashing down in many ways - is accutely portrayed. If you have loved the world of James Bond, you should discover the story of 007's creator.

I wish I had read this book sooner! I put off buying and reading it because the reviews were not stellar. Admittedly, like most biographies, this book begins with the Fleming family history, which is a little bit slow. But, the book picks right up as soon as they start telling Ian's story. Skip to World War II if you want to get right down to the most interesting times in Ian Fleming's life. There are no slow spots during or after the war.

The story is an interesting account of the life of Ian Fleming. The history and actions that lead this man into the experience that brought him to imagine to great James Bond stories was excellent. The audio quality is the shortfall of this audio book. Throughout this audiobook the static sounds, differences in volume, and tone bring slight distraction to a great biography.

While most people assume James Bond started in 1962 with Dr. No, it had started ten years prior when Ian Fleming sat down to write Casino Royale, which was released in 1953. However, it is fascinating that so many attempts to bring Bond to the big screen had failed, and that Dr. No wasn't supposed to be the first bond film. Ian Fleming by Andrew Lycett draws uncanny parallels between Bond and Fleming, and shows where each of those parallels came from in Fleming's own career in the spy game.

A friendly but critical and complete account of Ian's life. The Author treats all incongruities and intimate details with full disclosure, but without sensationalism. Ian Fleming turns out to be quite an interesting charachter, especially when his life is described in the settings of history, interesting personalities like Winston Churchhill. If you enjoyed reading the Bond series, you might find this biography well the worth the time it takes to listen to it. Insights into British history, and the forming personalities that surrounded Ian complete the journey, and it seems, you might just be reading the history of "James Bond". Reality is always more interesting than fiction. It was interesting to discover that many of the names and scenes he uses in his books came from his own flamboyant life. The Goldeneye project in which Ian was actually an actor is interesting to read as well. Dig in, and enjoy this book over a holiday or several days commute. Highly recommended.

This is an excellent and definitive overview of Ian Flemings life! Although some reviewers have complained of the nauseating details about names of persons known by Ian, I find such information to be priceless as a foundation of not only Ians’s life but also the social universe that surrounded his life.

Very detailed on Ian almost nothing on the movies.

Incredibly detailed biography on Ian Fleming. I was disipointed on the low amount of James Bond content.

Interesting story about a fascinating man

Interesting view into the life of the creator of one my favorite movie characters. Although I've yet to actually read one of his Bond book, I've enjoyed the screen version of his stories.

Reasonable Biography Spoiled by the Production

This would have made a readable if somewhat uncritical biography, unfortunately the production values of the recording let it down very badly. It sounds like it's been recorded at a dozen different studios, friends flats and kitchen tables. At one point the sound was so bad I had to pull over my car to adjust the tone on my iPod and stereo to make it bearable to listen to. I'm not such a fussy listener but this was truly bad

Fascination if not admiration

You don't have to like a person to find them fascinating. A person doesn't need to be likeable to be interesting. This is a very in depth recording of Fleming's life, "warts and all". It almost covers a day-by-day account of his life and is a great study of the upper-middle class and society of the period. I read this to contextualise the James Bond phenomenon having grown up with the films and have recently started reading the books. Overall it was interesting and fulfilled my brief.

This could have been a very good listen but,unfortunately, there are plenty of bad audio patches and censored words. Why?!?

I listened to this biography whilst laying on a beach on the north coast of Jamaica, not far from Goldeneye where Bond was created. Yes it describes a time gone by and a class system that for most of us seems alien. But what a life well lived and what a privilege to share it.

Thoroughly researched this is a must for any Bond enthusiast.
His entire life story is told 'warts and all' by a narrator with a suitably clipped English accent. Not being a James Bond fan myself I found this biography a bit lengthy and too indepth. On the other hand I was fascinated by Ian Fleming's life which was anything but normal.
Definitely worth a listen if you enjoy biographies.