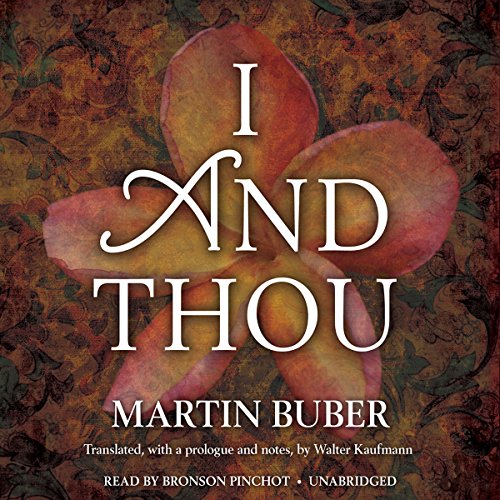 Martin Buber’s I and Thou has long been acclaimed as a classic. Many prominent writers have acknowledged its influence on their work; students of intellectual history consider it a landmark; and the generation born after World War II considers Buber one of its prophets. Buber’s main proposition is that we may address existence in two ways: (1) that of the “I” toward an “It,” toward an object that is separate in itself, which we either use or experience; (2) that of the “I” toward “Thou,” in which we move into existence in a relationship without bounds. One of the major themes of the book is that human life finds its meaningfulness in relationships. All of our relationships, Buber contends, bring us ultimately into relationship with God, who is the Eternal Thou.

The need for a new English translation had been felt for many years. The old version was marred by many inaccuracies and misunderstandings, and its recurrent use of the archaic “thou” was seriously misleading. Professor Walter Kaufmann, a distinguished writer and philosopher in his own right who was close to Buber, retranslated the work at the request of Buber’s family. He added a wealth of informative footnotes to clarify obscurities and bring the reader closer to the original and wrote an extensive prologue that opened up new perspectives on the book and on Buber’s thought. This volume provided a new basis for all subsequent discussions of Buber.

Martin Buber (1878–1965) was a Jewish philosopher, theologian, Bible translator, and editor of Hasidic tradition. He was also known as one of the paramount spiritual leaders of the twentieth century and is best known as the author of I and Thou - the basic formulation of his philosophy of dialogue - and for his appreciation of Hasidism, which made a deep impact on Christian as well as Jewish thinkers. Fleeing Nazi Germany in 1938, he immigrated to Israel, where he taught social philosophy at the Hebrew University.

©1970 Charles Scribner’s Sons (Translation); Prologue 1970 by Walter Kaufmann (P)2011 Blackstone Audio, Inc.
“A revelation…It is a book to be read through and pondered, and then read again.” ( Times Literary Supplement, London)

Cosa pensano gli ascoltatori di I and Thou

I and Thou is a classic as it deserves to be. Like many classics, it is an unusual book. It is about connecting directly with the God in each being we encounter. It is about how we might share in deep and genuine connections with our fellow humans and how we might find God within the world of human relations.

At its best, the book succeeds in laying out a new paradigm of spirituality, one that is neither focused on some externalized God, nor the God within, nor the God of unity. For Buber, God can best be sought in each if our relations, in the way we relate from moment to moment.

It is a beautiful book, imbued with Buber's own unique language. The only problem is that Buber's language is not always easy to understand. Part of the reason for this may lie in the translation; philosophical works in German are notoriously difficult to comprehend. There is also a long tradition of philosophical obscurantism amongst German philosophers of which Buber is sadly a part. But it is a language and phrasing that marches to its own inner rhythms, and it is as unique as its message. Altogether, it is a beautiful book to which one might do yoga or tai-chi or take a walk in the woods.

Martin Buber is an early-to-mid twentieth century German-Jewish philosopher. He wrote like Heidegger at his best before Heidegger. And he was one of a small handful of Jewish immigrants to Israel, before it was Israel, who advocated for a one-state for Jews and Palestinians to share. This was before the one-state solution was being advocated as an alternative to the two-state solution, which came after the solution was ethnic cleansing. Whereas Heidegger was a Nazi, Buber was a genuine humanitarian, and it shows in his work. Buber was far ahead of his time; hence, it should not surprise us that he wrote such a timeless classic.

The reader stays out of the way, not interfering with the text, so that it might speak for itself. Altogether, the result is a beautiful experience that can be returned to repeatedly.

Difficult as an audiobook

This philosophical work is amazing, but I found it too dense to follow as an audiobook. Deserves more time and study with each page. Still, a good way to get through the book quickly. Note that I found the introduction by the translator excellent.

Practical... idealistic... high-flying poetry. Rather as though Thomas A. Harris, Kahlil Gibran and Georg Hegel got together and wrote a book. Definitely one to get to before you die...

As an artist, Buber gives me my favorite picture of what artistry is. His ideas about God and relationship have also shaped my life qualitatively.

this is one of the most amazing yet difficult books I have ever read. it is not for the faint of heart, but only for those we have a deep philosophical and perhaps the illogical interest in the heart of human relationship

This book should be called “About I Am Thou” because it’s explanatory but not the text. As a critique it may be excellent...? I rate this low because it’s dishonest to present this as the actual text when it is not.

Not the actual book??

I tried to listen to this book, but after 1 hour and 12 minutes, it is clear that this is only an introduction to the actual book. The narrator continually talks about the book but never reads it! I am returning this.

This is a book that needs to be read. Not listened to, read. The speaker does a great job and presents the material well, but the work is just do dense in meaning, wording, and possible interpretation that one should rely on this audiobook only as a superfiscial introduction into this book. I plan on purchasing the book and reading and rereading, but I appreciate this audiobook for bringing to light this spiritual classic.

Profound and fresh approach to psychology

Would you listen to I and Thou again? Why?

Anyone interested in psychology who has not yet discovered Buber will find is approach radical and enlightening.

This is quite challenging to follow, you need to sit and just listen, or play it through a couple of times.

Buber challenges the modern construction of the individual by stressing the inter-relationship between people as the foundation of mental well-being, not fixing the individual in isolation.

It's quite short and a good introduction to Buber's approach. I recommend Between Man and Man by Buber as well.