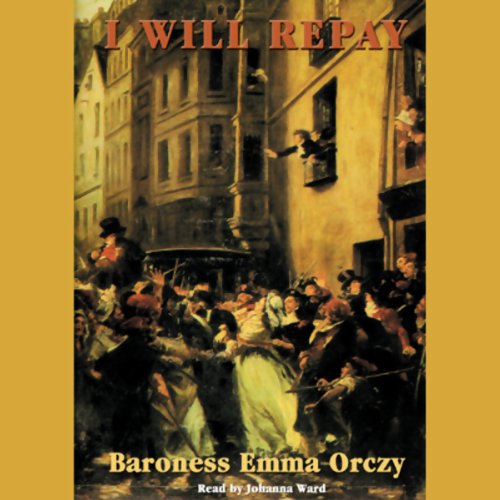 It has been 10 years since Juliette de Marny's father asked her to swear revenge upon Deroulede for the death of her brother in a duel. At last, she finds herself in Deroulede's house, with an easy opportunity to betray him to the citizens of France for conspiring against the people. But Juliette realizes, too late, that she is in love with Deroulede.

Can the Scarlet Pimpernell rescue Deroulede from certain death by guillotine? Will Deroulede forgive Juliette for her betrayal of him? Romance and intrigue abound in this delightful swashbuckler.

"Johanna Ward is fun to listen to. She puts the author's rather melodramatic prose in the best possible light by reading with restraint, gravity, and authority." (AudioFile)

When Orczy is at her best...

she is a rival for Dumas, Shakespeare and the Greek playwrights. Here we have Electra, Hamlet, and the Count Of Monte Cristo all rolled up into a compelling little novel in the ongoing Percy Blackley/Scarlet Pimpernel series. Would love to see even more of Orzcy on Audible.

More of a romance story

Where does I Will Repay rank among all the audiobooks you’ve listened to so far?

This audiobook ranks highly for me because I am a Scarlet Pimpernel fan and have read all the books. It is very difficult to come across very many of these books in audiobook format. So this is rare.

What was one of the most memorable moments of I Will Repay?

I liked the scene where the Sir Blakeney (AKA the Scarlet Pimpernel) meets with Anne Mie who is of the household of Paul Déroulèdes is not very beautiful and is plainly jealous of Juliet, but Blakeney treats her with respect and tells her plainly what she asks to know. It shows what a great soul Sir Blakeney is and possibly one reason he has been risking his life to save people from the guillotine.

Juliet's father forces her to swear an oath before God that she will avenge her brother's death even though he died in a fair fight.

I usually listen to a little bit at a time while I am cooking, or doing things where I can play an audiobook and listen.

If you are a Scarlet Pimpernel fan, you will find this book has some of the least Pimpernel scenes of any of the books. It focuses mostly on the romance between Juliet and Paul and betrayal, then remorse and love.

Pretty good story and I enjoyed the narration although somewhat predictable, especially if you are familiar with other books by Baroness Orczy.

The story was Nnot as good as it should.

The story would have been much better if fleshed out, and as a standalone I hated the fact it is presented overall as a "Scarlet Pimpernel" novel. The character makes but a cameo, and Marguerite, where is Margyerite? Perhaps she is in disguise. Published about 100 years ago. Today we would call it a rip off due to it being labeled a Scarlet Pimpernel novel.


Would you be willing to try another book from Baroness Emma Orczy? Why or why not?

Have read other Orczy Scarlet Pimpernel novels and enjoyed them. Intend to read more.

Well done, about 20 years ago. Still the narration does add to the novel.

Did I Will Repay inspire you to do anything?

Won't read it again, or recommend the book.

This book sucked! Stick to the original.

Seriously, this ruined the original for me. Great job, really. What a screw up. Are you kidding?

Poor narration, trite and unlistenable, definitely would not recommend this version of the book. Avoid!