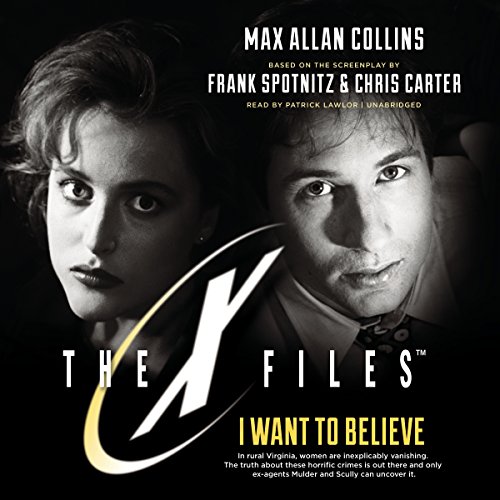 I Want to Believe

During a brutal winter in rural Virginia, women are inexplicably vanishing. The only clues to the bizarre disappearances are the grotesque human remains that are turning up in snow banks along the highway. A disgraced priest has begun to experience strange and disturbing visions connected to a terrible secret. But are the images haunting a fallen man of God to be trusted...or are they the deadly lies of a twisted mind?

It is a case right out of the X-Files. But the FBI suspended its investigations into the paranormal years ago. Ex-agents Fox Mulder and Dr. Dana Scully are the best team for the job, but they have no desire to revisit the past. The truth about these horrific crimes is out there, and only Mulder and Scully can uncover it.

The author writes books about television stories. Overly sentimental and not well done. Collins in some of his books about other series are tolerable. This one is painful.

I really liked the book

However, I don't think I would have purchased it if I knew it was exactly like the second movie.

Out of many X files books I have listened to, this one is meh. Story could have been more captivating but is filled with IMHO unnecessary details and descriptions.

In the tradition of the X-Files, this is another great story of Scully and Mulder.

Highly recommend this as book 8 have read them all, and fully enjoyed the stories.

pretty decent title. less plot holes and a very interesting concept that should have been explored more

The narrator did a great job, and I enjoyed the story. I recommend this book.

4/5 Stars I Want to Believe by Max Allan Collins

Summary:
Dr. Dana Scully struggles with an emotionally heavy case, a young boy with a rare brain disease. The only way to save him is a very painful series of surgeries. Meanwhile, she convinces Mulder to help the FBI with a tough case that seems classically out of the X-Files.

Additional Comments:
- I think I saw this movie, but I remembered less of it than I did the Fight the Future one.
- This one is well after the X-Files closed. Mulder and Scully are partners/lovers but not married. They’re probably mid-40’s here.
- Mulder’s called in to consult on a tough, time-sensitive case involving a kidnapped young special agent.
- It’s a complicated case involving a disgraced priest who claims to have visions.
- The medical/normal side of this case is highly creepy. The paranormal side is par for the course.
- It’s good to see Mulder and Scully back in action, but it also feels like that ship has sailed. I’d almost rather believe they solved the last of the X-Files and road off into the sunset sort of thing.
- It’s good but not as good as the earlier books in the series. I’m not sure why it’s even considered part of this series because I believe the rest of the stories are originals as opposed to being based on movie scripts.

Conclusion:
A good story with X-Files vibes, but much like the beloved TV series, it feels like it’s trying too hard. (I don’t think I ever finished that series. I have it somewhere, I just never watched season 8 and 9.)

An interesting story with a variety of interesting characters. Intriguing and suspenseful. There’s no hint of what the ending will show. Very typical Mulder/Skully interaction. Well worth the listen.

It will not play going to return it and will try to reload it later.

As an x file fan it’s hard to hear others do the voices. But they are just about ok. Story is good if a little unclear at times. Ok.

the voice acting for scully was poor as was her character arc so late in the pairs working relationship, all she did was complain didn't make sense from a character development view point

Another great Mulder and Scully story, just a pity it's the last in the series.☹️

If you love the film you will love the audiobook. It narrates the same as the film and the audio is superb. Patrick Lawlor excellent narration allows you to immerse yourself into the book and you can easily relate to all the characters and events from begging to end. Nothing is cut from the book which was in the film and I found it gripping and loved listening to the entire book. Well worth the money.

Seeing it’s included in the membership -it’s alright I won’t be happy if I paid for it however. This is a short book.story line ok some unexpected turns. Narrator was good too