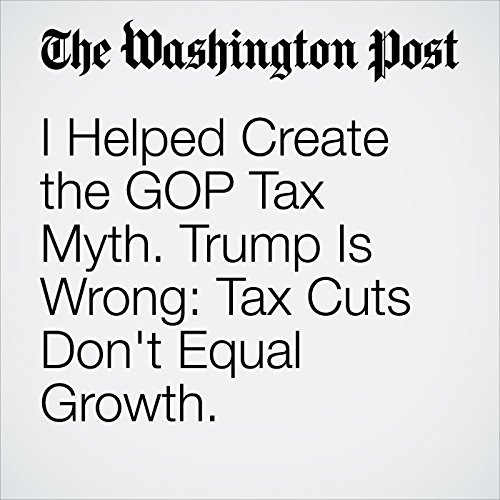 Four decades ago, while working for Rep. Jack Kemp (R-N.Y.), I had a hand in creating the Republican tax myth. Of course, it didn’t seem like a myth at that time — taxes were rising rapidly because of inflation and bracket creep, the top tax rate was 70 percent and the economy seemed trapped in stagflation with no way out. Tax cuts, at that time, were an appropriate remedy for the economy’s ills. By the time Ronald Reagan was president, Republican tax gospel went something like this:

"I Helped Create the GOP Tax Myth. Trump Is Wrong: Tax Cuts Don't Equal Growth." is from the September 28, 2017 Perspective section of The Washington Post. It was written by Bruce Bartlett and narrated by Sam Scholl.

Read it fast or they take it away

This is free, so I can't call it a rip off but it is a waste of time because - unbeknownst to me and I see no warning in retrospect - I went to listen it several days after adding it to my books only to be told that my &quot;subscription&quot; has expired and I cannot re-load it. BOOOO!!!