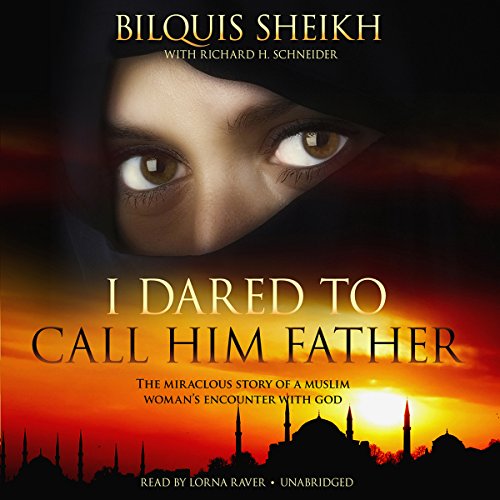 How do I give myself to God completely? What happens when I do?

This is a book for everyone who has ever asked these questions.

I Dared to Call Him Father is the fascinating true story of Bilquis Sheikh, a prominent Muslim woman in Pakistan who faced these questions at the crossroads of her life and found the astonishing answers. Her unusual journey to a personal relationship with God turned her world upside down - and put her life in danger - as a series of strange dreams launched her on a quest that would forever consume her heart, mind, and soul.

Originally published in 1978, the book has sold 300,000 copies and is a classic in Muslim evangelism.

Bilquis Sheikh came from a family in Pakistan that held government power for seven hundred years. She was also the wife of a high ranking government official in Pakistan. She gave her life to Jesus Christ in 1966. In 1972, sponsored by Samaritan’s Purse, she resettled in the United States, where she spoke widely and shared her faith with many. Years later she returned to Pakistan, where she died in 1997. She was given a Christian funeral.

©1978, 2003 Bilquis Sheikh (P)2012 Blackstone Audio, Inc.
“ I Dared to Call Him Father is a fascinating autobiography that challenged me in my walk with God. How many of us would be true to our faith if we knew that embracing Christianity could be our death sentence?” (Mary Ann Littrell, Christian Librarian)

The story of an intimate walk with the Lord

I really enjoyed this book. Hearing how the Lord drew Bilquis into moment by moment obedience was a wonderful reminder of the way the Lord works in our lives. The story also caused me to long for that time in my life when the Lord was so very near.Have you been lulled into spiritual contentment by the cares of the world? Bilquis' testimony will awaken a new desire for that fresh closeness we so often lose over time. Her story, however, tells the tale of a life that only drew closer to Him as the years passed. It is also a story of the faithfulness of God to reach those who long to know the truth.

What made the experience of listening to I Dared to Call Him Father the most enjoyable?

Hearing about how Jesus touched her life in the midst of a Muslim culture.

What was one of the most memorable moments of I Dared to Call Him Father?

When she has a dream and in the dream she is having supper with Jesus.

Have you listened to any of Lorna Raver’s other performances before? How does this one compare?

When God through this woman used her to bring comfort to those who had ostracized her.

This is a very wonderful, touching and inspiring story of how one woman, in the midst of a Muslim culture in Pakistan, gave her life to Jesus, and the wonderful things that happened as a result. An absolutely beautiful life story, I enjoyed it very much.

I am beyond pleased with the purchase of this audio book! The narrator was remarkably enjoyable, the story was indeed miraculous... At times I cried, often times I threw my hands in the air shouting "Oh Lord Jesus, you're AMAZING!!!" And now that it's over, I already miss Bilquis and her story!!! I'm recommending this book to every believer I know... Especially women!!

Wow! I did not want to stop listening. Loved it!

Where does I Dared to Call Him Father rank among all the audiobooks you’ve listened to so far?

This is one of the best.

What other book might you compare I Dared to Call Him Father to and why?

The closest to it so far is The Life of David Brainerd. They are both close personal accounts of their experience with God.

She was willing to risk everything to know God. She was muslim from a high ranking family in Pakistan.

The most moving was when she asked God to come into her and she was filled with the Holy Spirit. She describes her experiences so well.

I was asking God to show me which Audiobook would encourage me. It has. Thank You Lord Jesus!

One of the best stories I have ever listened to. The narration is excellent. I could hardly tear myself away from this book. Masterfully told.

Excellent story. It did a great job of sharing the risk that the Muslim world experience as result of coming to Christ. Great story.

Would you listen to I Dared to Call Him Father again? Why?

I have listened to it four (4) times. To fill in the blanks and ensure I didn't miss anything.

What does Lorna Raver bring to the story that you wouldn’t experience if you just read the book?

Pathos. Her interpretation of the feelings and moods of the characters was exceptional

Every person with questions about the existence of God will be challenged by this book. For Christians, a great example of living in His Presence

This is an excellent book of discipleship!

The first time I listened to this book I really, really enjoyed it. I have owned it for a few years and just listened to it again. I am in absolute awe! At my first reading I had not had the various experiences with the glory of God that I have had now, so this time my points of reference are different and expanded. I have seen the glory come and go in my life in the last few years, but I did not know why that was. This book clarified exactly what the hinge points are for maintaining a closeness to God in your life in a consistent manner. I am so grateful for this book! It uncovered areas in my life where I was slack and that need to be built up. It also pinpoints things that have caused the tangible glory to disintegrate right before my eyes and how the writer handled those situations when they occurred in her own life. If you want to be a carrier of the glory and you need step-by-step teaching, this book is for you. Bilquis Sheikh gives honest insight into how she learned to keep her life an open gate for the presence of God to dwell in. So many times I was unaware of why the glory departed, but after this book I have more understanding about the part I play in not only keeping myself for for God's use, but maintaining an extraordinarily close relationship with Him. Actually, I learned that they are one and the same. Do yourself and favor and purchase this book.

I stumbled across this book by accident and put it on my wish list because I like Lorna Raver's narration so much.

Once I began to listen to it, I just could not stop. The story is told in clear and simple terms and yet is so very moving and touching.

Bilquis Sheikh manages to reveal many of the mysteries of the Muslim mindset which before escaped me ( a westerner) completely.

She has an unusual story and I loved every minute of it. (And I don't want to spoil it for others.)

I've listened to it at least three times now and will continue to recommend it to friends and family and any others who will listen to me.

Even if you just read this for curiosity's sake, get it and read it. Maybe, like Bilquis, you will find your life equally changed and enriched by the source of her joy.

Raver is the perfect narrator for this story and as usual she does a superb job!

This book is about faith. This is extreme faith. I am in awe of the faith shared by Bilquis Sheikh, in this, her testimony of how she came to and grew in her faith in Jesus Christ and our Father, God. I highly recommend this book for Christians, Muslims, Jews and atheists.

One of the most interesting Christian biographies I have read. Full of sincere confessions given with profound background. it helped me to understand my faith better.

This is the second time I've listened to this book and I found it as fascinating and captivating as the first time. I so admire Westerners like the Mitchells and Olds for going into Muslim countries spreading the good news. I admire Muslims who step out of the boat and seek the One they will call Father.

Strongly recommend this book to new Christians seeking understanding of the personal relationship with God.

Well read and fascinating story
Made me realise how easy it is to grieve the Holy Spirit.

A wonderful story of true trust in God beautifully read an inspiration to all how now and love the Lord.

More than a story

I loved this very much and still think about it often. Not only was the story of this brave conversion inspiring, it has taught me about a relationship with God in new ways. I believe that these sorts of testimonies are valuable in many ways. They inspire, motivate, teach and stay with you. I believe that learning about what it can be like coming from a Muslim background is insightful and important. Highly recommended.

What can I say?

Throughly enjoyed listening to this. Woven like golden threads throughout this testimony are the simple but valuable lessons Bilquis learned on how to discern God’s voice. Lessons that can be applied in our own personal lives.

A story that demonstrates the beauty of a relationship with Jesus. How important it is to focus on Him and His instructions for the present rather than the patterns of my past walk with Him!

A beautiful book. Loved every page. This book is a must read! Don't miss out.

With so much to lose, Bilquis gives up everything for Jesus. Inspirational story of genuine conversion in a hostile environment. Should encourage Muslims seeking The Truth.