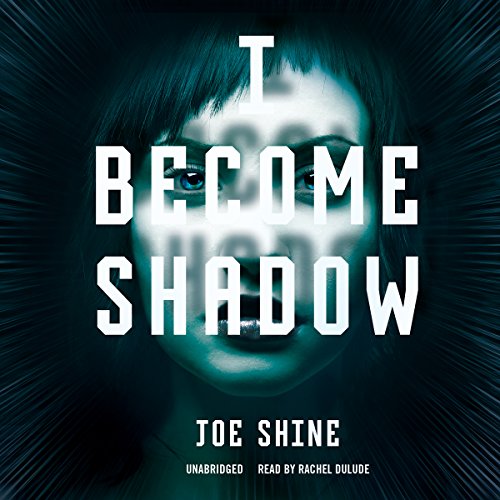 When Ren Sharpe was 14, she was kidnapped by a shadowy organization called FATE and trained to be a human weapon.

Now, four years later, she receives her assignment: protect Gareth Young at all costs. Currently a student at Texas A&M, Gareth will someday change the world. FATE calls people like Gareth "FIPs" - future important people - and they're everywhere, each with a FATE-trained shadow.

But when disaster strikes, Ren will have to turn on her maker. Together with Junie, a fellow abductee and the one person she trusts, Ren takes Gareth on the run.

Because whatever else happens, failure is not an option.

I can forgive logic flaws in a YA book when the author knows to write very tongue in cheek rather than drearily earnest. With Joe Shine's I Become Shadow, we have a very snarky but also kick-butt heroine that who makes for a great character to read. Sure, you do have to turn off your brain - but that is the appeal here and I enjoyed this book for what it is - great entertainment.

Plot: At 14, Ren Sharpe is kidnapped from her bed by a shadowy organization who imprisons her for four years, teaches her martial arts, and then sends her out to protect a person who will become very important in the future (appropriate dubbed FIP for Future Important Person). On her first assignment to protect a very nerdy college student, things begin to go very wrong for Ren.

The first half of the book is the 'training' - where she become acquainted with the shadowy organization that supposedly knows the future. The justification for her kidnapping is simple: she would have been dead anyway in an accident and this way she can be of use to the world. By the second half, she's been assigned to protect a brilliant student and we get her interactions with him as she is forced to break rule after rule in order to protect him.

There are three main characters in I Become Shadow - Ren, fellow abducted Junie, and nerdy student Gareth. If it sounds like this is a love triangle, don't worry. Even the romantic subplot with Junie is very underplayed and lacking the saccharine soppiness of most YA romance novels. I greatly enjoyed following Ren through her travails - she was a likeable character smart enough to recognize when she was in trouble yet also able to hold her own without needing to be rescued. Passive, she wasn't.

Of course, what drew me most to the book was the snarkiness. I admit to greatly enjoying when the main character adroitly uses self deprecating wit in order to deal with problem situations. It's a reminder not to take the plot too seriously and just enjoy the ride and Ren mows down the bad guys.

I look forward to the next in the series. Reviewed from the Audible version, which had a decent narrator.

This book was better than expected. The touch of humor in the telling keeps it from being too heavy without removing the emotions the lead is feeling in all the difficult situations. Overall I was happy that the lead didn't fall into a female steriotype. Loved the performance! Great voice for the part.

The first half of this book was so promising , so intriguing , a girl has been trained for 4 years to be lethal , to control any situation , to be invisible and so on .
But the second half was unconvincing , she was so stupid , making mistakes , braking rules , being so noticeable to everyone , and control nothing from day one out fo the F. A. T. E. institution

It was so boring I had to skip to the end

Don't waste your time on this book. It was terrible. Thank God it was included with my audible membership for free.

Hands down, my favorite book I've read OR listened to this year. It's labeled "young adult", but I think anyone over the age of 14 would love this book.

In the mid 90's, a group discovers how to see into the future (somehow). They know who will die young, and who will go on to do something very important. They could just leave things like that, but if an organization with GOOD intentions discovers how to look into future events, chances are very high that another organization has the same capabilities, and if the future does not benefit them, they're going to want alter it.

Thus, F.A.T.E...Future Affairs Training and Education Center. F.A.T.E snatches up the teens that were going to die anyway, and trains and conditions them to be protectors of those who are destined to do great things. Ren was going die, so they snagged her up. This story follows Ren from her last few days of being a normal teen, through her four years of training, and on to her assignment.

The clencher for this book is Ren's personality...she's very much a tongue in cheek, roll with it type girl, and that is how this story is told. This book is non-stop action from page one and never slows down. I LOVED this book and became fully emerged in it. There is a second book, but I'm not sure it has the same characters. I will definitely be grabbing that book up as soon as I can get my hands on it! It does have a different narrator, as it will follow a male character. No way that narrator will be as good as the one who narrated this book (she was outstanding), but if the writing is similar to this book, I don't think subpar narration will take away from it much.

I liked the story

Great start to a series (I hope) I would love to find out more about the group and what happens to Ren & Jun.

I really enjoyed listening to this book. The author did a great job developing the characters and the heroine was very likeable. I wish books like this had been available when I was a teenager. I love to read and this book is definitely one of the best YA novels I've read. It is not too angsty and the characters ring true. The suthor did a good job making the concept seem very possible. I listened to the entire book over the course of 2 days. I recommend to teens and adults.

Narrator performed credible characters throughout. This could be a wonderful YA series. . . .

I listened all the way through this one and it was easy to do, never a dull moment in the whole seven plus hours. I want to encourage Mr. Shine to keep writing and Amazon to keep providing listens as entertaining as this one.