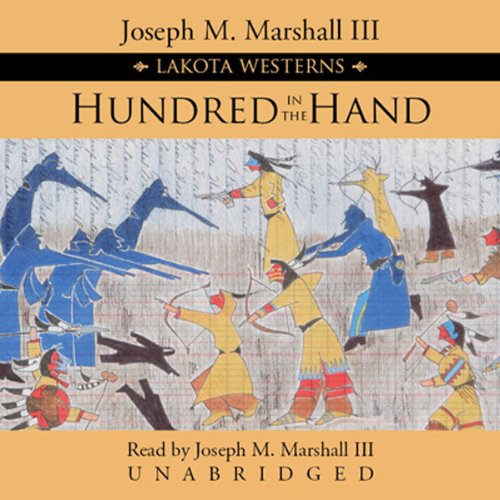 Hundred in the Hand

Seeking to round out the compelling story of the American West, best-selling Lakota author Joseph M. Marshall III brings a new slant to the traditional Western: historical fiction written from the Native American viewpoint.

This riveting story takes place during the Battle of the Hundred in the Hand, otherwise known as the Fetterman Massacre of 1866. The story is told alternately through the eyes of Cloud, a dedicated Lakota warrior who fights alongside a young Crazy Horse, and Max Hornsby, a white pioneer who mistakes Cloud's redheaded wife for a captive.

Beautifully written and reminiscent of the oral tradition, Hundred in the Hand brings new depth and dimension to the story of the battle and the Lakota people.

How the West was Lost

A novel of great heart and truth, "Hundred in the Hand" absorbs us into the intimate details of the lives of a handful of Native Americans shortly before their final round-up and herding into camps. Like it's sequel "The Long Knives Are Crying", we are introduced to an old survivor of the real battles of Hundred in the Hand and to the Battle of Little Bighorn, who has taken his family on a pilgrimage to the monuments erected there to impress upon them two momentous victories over the hoards of relentlessly demanding Settlers and protecting Armies who were invading their land.
It is not a mawkish romance but a dignified telling of a passionate people with an ancient history and love of a land that held the souls of their nation. Although the future of the true American was irremediable, the strength of character and sense of belonging to a place, live free or die, his battle against the machines and the multitude of White culture coming to annihilate them for land and its' riches, the Native People have a brilliant, colourful and glorious history as told, in part, in these two moving, beautiful books.

Brings the story to life

I love Joseph Marshall III’s writing. He writes n such a way that it brings the story and history to life. You can get lost in the words and picture it being carried out in your mind. The narration is excellent and easy to listen to and follow.
His books, including this one is so much more than history. It respects the oral story telling tradition of the Lakota and the book becomes a historical narrative where you can begin to try to understand the life, feelings and struggles of all the people involved.
Highly recommend!

Hundred in the Hand is a fascinating story

Narration of Hundred in the Hand was marvelous and done in the story-telling style of my Yaqui friend. The story comes from the indigenous view of events around the battle of the Little Big Horn. I highly recommend it to anyone who enjoys seeing different views of events.

It is a gift to hear REAL history. I am grateful to have learned this story of survival. Wopila Tanka

I love Joseph Marshall books. His voice, knowledge of the Lakota language and way of life, and with the support of native Lakota songs, make me come back again and again.

That being said, his books often seem particularly biased towards to “Lakota were always the victim of white hate” narrative. He removes aspects of stories that would reflect the Lakota negatively. He brushed over the fact that Lakota warriors initiated the battle of Wounded Knee (first to shoot and first to attack), and he all but erases Red Cloud from Lakota history for some reason.

In this specific book he creates situations and internal monologue that is impossible to trust happened. I.e. internal monologue of someone who is dying, characters that died without ever telling their story, and back stories that are historical fiction at best.

The Hundred in The Hand, an outstanding book by an incredible native author, representing the battle from the Lakota perspective.

The real “Dances with wolves”

A gripping and heartfelt historical account of a well known “massacre” from the Sioux perspective. I could barely stop listening and teared up many times.

This was truly phenomenal. The storytelling, history, and music were really well done. I definitely recommend this.

I found this title and it’s sequel “The Long Knives Are Crying” to be well worth the time to listen to them. Thank you Mr. Marshall.

What a great story from the native Americans point of view, when all we ever hear is how the whites seen the events of battles, births and love. I truly enjoyed this audible.

Is this listed as fiction? Clearly an alternative view of the "wild" west (not exactly west!). I confess I am a fan of the author and enjoyed the telling of this story. The story gives insight into both "sides" views and reveals weaknesses as well as strengths. Get away from Ray Meers' How the Wild West was won ..... please.