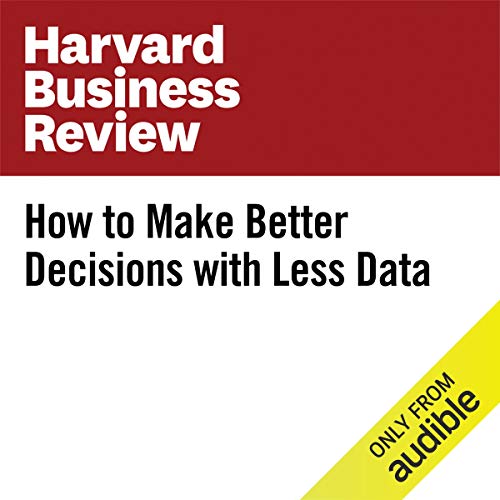 How to Make Better Decisions with Less Data

Maria, an executive in financial services, stared at another calendar invite in Outlook that would surely kill three hours of her day. Whenever a tough problem presented itself, her boss’s knee-jerk response was, “Collect more data!” Maria appreciated her boss’s analytical approach, but as the surveys, reports, and stats began to pile up, it was clear that the team was stuck in analysis paralysis. And despite the many meetings, task forces, brainstorming sessions, and workshops created to solve any given issue, the team tended to offer the same solutions - often ones that were recycled from prior problems.

"How to Make Better Decisions with Less Data" is from hbr.org, published on November 7, 2016.

The problem description is quiet interesting but the rest of it is just an overfit solution which is slightly overfit to specific meeting scenarios. Also, there is a good chance you will end up recreating the problem.
AUDIBLE 20 REVIEW SWEEPSTAKES ENTRY