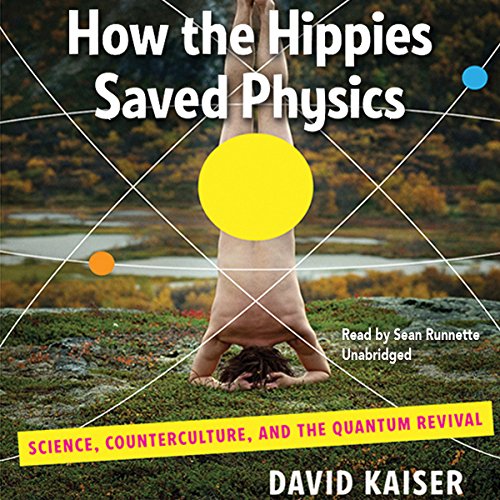 The surprising story of eccentric young scientists who stood up to convention—and changed the face of modern physics.

In the 1970s, amid severe cutbacks in physics funding, a small group of underemployed physicists in Berkeley decided to throw off the constraints of academia and explore the wilder side of science. Dubbing themselves the “Fundamental Fysiks Group,” they pursued a freewheeling, speculative approach to physics. Some dabbled with LSD while conducting experiments. They studied quantum theory alongside Eastern mysticism and psychic mind reading, discussing the latest developments while lounging in hot tubs. Unlikely as it may seem, this quirky band of misfits altered the course of modern physics, forcing mainstream physicists to pay attention to the strange but exciting underpinnings of quantum theory. Their work on Bell’s theorem and quantum entanglement helped pave the way for today’s advances in quantum information science.

A lively and entertaining Cinderella story, How the Hippies Saved Physics takes us to a time when only the unlikeliest heroes could break the science world out of its rut.

©2011 David Kaiser (P)2011 Blackstone Audio, Inc.
“How the Hippies Saved Physics takes readers on a mind-bending trip to the far horizons of science—a place where the counterculture’s search for a New Age of consciousness opened the door to a new era in physics. Who knew that the discipline that brought us the atom bomb had also glimpsed Utopia? Amazing.” (Fred Turner, author of From Counterculture to Cyberculture)

All physicists should take LSD & cut to the chase.

An interesting enough story about brilliant minds, some of which were opened to inner dimensions by psychedelics, others of which were influenced by their proximity, and some which were simply a product of their time and space. Like the similarly themed "A Quantum Story", it traces the intellectual path from linear (and arbitrarily constructed) Newtonian physics and its pompous 19th century presumption to know and explain everything to the 20th century realization we don't know much about anything and probably never will. (How big is infinity anyway?) It also reveals the practical application of sciences both in its references to Cold War weapons development and, more interestingly to me, the discovery of quantum encryption which makes it possible for us to buy things and bank online reasonably safely. My only gripe is that I'm not a physicist and, as with "A Quantum Story", I could have done without the tedious blackboard formula reading. This much shorter version of the story is a better choice for the layman, and even then you had better be really interested.

Interesting if you can look thru idolization

The material is interesting, but the author’s idolizing writing style often becomes stifling and moves away from objective reporting. The members of the Fundamental Physics Group are presented like supernatural Davids against the conservative mainstream science Goliaths, which devoid them of humanity.

Well narrated, and a somewhat interesting story that should have been told in a third of the time. It could have been titled "what little good came from crackpot science"

The main emphasis was on the crackpot science, not the little good that came indirectly from it.

A tad disappointing for my taste.

I can’t stand his voice

I feel like I’m in a 1970s lecture hall. No intonation. Not even a feigning of interest. Just a professor droning on endlessly, uncaring about the level of interest of his audience.

I’ll buy the book, because it seems interesting, but the narrator makes me fall asleep.

or shall we say "How Physics Saved Hippies" ?
nice listening and review of weirdness of quantum physics

Fascinating history of 1960s to 1980s physics, where counterculture meets theory. Well written by physicist and social scientist. Performance is weakest part. Narrator does not know his physics well enough to get the cadence right, and sometimes mis pronounces important terms. Still worth a read or a listen.

fills in blanks that point to the future

If you could sum up How the Hippies Saved Physics in three words, what would they be?

What other book might you compare How the Hippies Saved Physics to and why?

What does Sean Runnette bring to the story that you wouldn’t experience if you just read the book?

he takes you for a pleasant ride

it tells a story, that had to be told.

Why did I buy this?

What would have made How the Hippies Saved Physics better?

This book could not have been worse. Perhaps cutting the entire narrative might have made it better.

What was most disappointing about David Kaiser???s story?

He appears to know absolutely nothing that he is writing about. The opening chapter is all totally spurious in its effort to make connections between bongs, marijuana, Berkeley, and Quantum Physics -- it reads like the kind of parody one might think of writing when one is stoned out of his mind.

Let me put it very simply: If, like the author, you believe that Francis Ford Coppola made the movie "American Graffiti," then truly this is the book for you.

If you could play editor, what scene or scenes would you have cut from How the Hippies Saved Physics?

If I could play editor, I would reject this book entirely and tell the author not to give up his day job.

Lord how I wish I could get my money back on this one. This book is to history what spray on hair is to cosmetics.