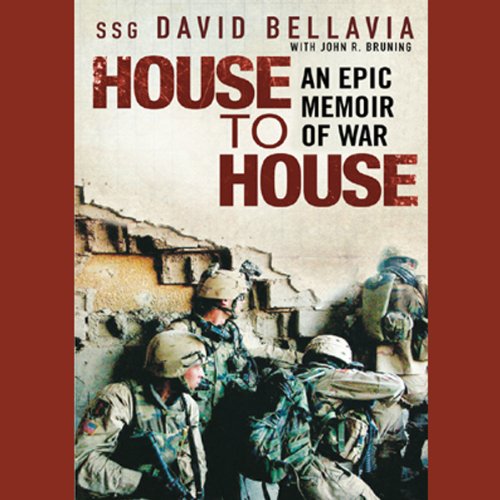 This is the personal side of battle, where emotion, courage, and strength are stretched to the limits.

In one of the most compelling combat narratives ever written, Staff Sergeant David Bellavia, an Army infantry platoon leader in Iraq, gives a teeth-rattling, first-hand account of 11 straight days of heavy house-to-house fighting during the climactic second battle of Fallujah. His actions in the firefight, which included killing five insurgents in hand-to-hand combat, earned Bellavia the Bronze Star, the Silver Star, and New York State's highest military honor, the Conspicuous Service Cross. He has been nominated for the Medal of Honor and for the Army's second-highest combat medal, the Distinguished Service Cross.

As raw as it gets

David Bellavia's memoir "House to House" describes the intense fighting and the sacifices made by our forces in Iraq in raw detail. If you are looking for a first-hand account of what is really going on in Iraq then this is the book you should download. David, thank you for your service to our country.

I think this is a great book. I've read or listened to many books about the wars in Iraq (including another that focused on Fallujah) and AFG. and think this is one of the best. Although I like almost all of the other books, this one really gives a sense of what the weeks, days and hours for Staff Sgt. Bellavia and his unit were like (unrelentingly brutal). It gives details about things I've never thought about before - what it's like to have lacerations from flying shrapnel all over ones face and body in a filthy, bacteria laden environment (the result is intense infection), or the consequences of not being able to take off combat boots for days on end (painful, rotting feet) - and those are just a couple of the "little" things.

I wish every American would read this. As our troops return from multiple deployments, it's extremely important that the general population be educated about what they've endured. I can't imagine anyone reading this without coming away more understanding of and compassionate towards our combat veterans (and active duty service members).

Finally, I can't say enough good things about the narrator - he is fantastic.

This is one mans view of the US assault on Fallujah, if you want an overview of strategy this is not the book for you. This is about the struggle of Staff sergeant Bellavia and his platoon as they fight house to house in the city of Fallujah. Personally I like the detail and the perspective from the man on the ground, no gloss, no political spin, just the raw details as he sees them. The saying "someone has to do it" in never more appropriate than in this book. War is not clean, surgical or all electronic yet... We still rely on the "Warrior" despite the spin often portrayed in the media. The book does not always read well but this is not meant to be a classic this is one mans perspective and I think he does the job well. You have to admire anyone who is prepared to place themselves in harms way in situations like this, God Bless our troops may we always support them, despite the social/political climate.

Wow, Best of this type!

Where does House to House rank among all the audiobooks you’ve listened to so far?

Very near the top. Story is just amazing and author brings you along so well.

What was one of the most memorable moments of House to House?

when author fights by himself in the house near the end of the book. Also when he recounts his interactioins with his son it just tore me apart. Reminded me of my son and having to leave him and his mother when I travel.

Have not listened to one of his other performances but this was truely stellar.

You bet....but I forced myself to break it into little pieces to make it last.

I was thinking this would be similar to many other similar books I read but I was absolutely floored by the emotion, and the feeling that pours forth from this book. Only regret is not purchasing sooner. You will judge other books of this type by this book from now on.

One of the best audio books I have listened to

This book gives a brilliant insight of what it was like to be in the US Army, in Iraq, post Saddam. The author is very funny, honest and doesn't spare the listener from any of the horrors of war. This is a book you must get.

The Best Audiobook I've Ever Listened To

The writing is detailed, intense, and present, and HUGE kudos to the excellent narrator for bringing that all through. I spent A LOT of time in my car, after having parked for the day, just to listen to more of this book. Superb.

This is a first hand account of the horrors and sometimes incredible stupidity of war. Don't look for the reasons why we go to war but experience through the authors and narrator what it means to be in combat, sometimes hand to hand combat. My services in the Army taught me that you can become numb to almost anything and this book reminded me of those times. It also reminded me of the so often stupidity of superior officers who dress like field combat soldiers but sit comfortably behind desks in safe offices and never, ever even come close to combat. And of those politicians in Washington who send young troops to war, young men and women to fight battles for reasons unknown while the politicians pompously wait for their drivers to take them to the nearest pub for a free meal and drinks. Cynical am I, you bet but that comes from experience. This is a really worthy book. Not always easy to read and sometimes a little gritty. The language is that of a soldier, not a Harvard educated author but that is reality. You may be angry at the end but you should be proud of those who serve and you will be better off with a clearer understanding of war for having read this book. .

Really good honest account of a soldiers time in a battle zone. Reflects the brutal reality of life in combat as an Infantry man.

SSG Bell relates his story of the battle of Fallujah and completely involves the reader. Fascinating and can't put down story everyone ought to read(listen). It makes you want to scramble for your flac vest. Oh, I left mine in the arms room 35 years ago. What these men went through does not compare at all to my 20 plus years in the Army and makes me need to back up to the pay table for my retirement check. Heartbreaking and inspiring at the same time.

This is a great book. Not good, great. Full-on immersion into the life of an Army Infantryman from go (wading through sewage to get to an objective), no blinders or Political Correct-washing.

Fast, hard, and real - and read by the great Ray Porter.

I downloaded this because I'd just finished watching Generation Kill on TV and it got me really interested in the lives of military personnel. I did enjoy this book. It feels like an honest portrayal - the storyteller comes over as very brave and strong but also fallible and, on several occasions, a little bit deranged. And in a lot of the sections you feel like you know what it would be like to be out there. The bits I liked least were the (long) battle scenes. He doesn't give any real sense of time so you never know whether the events are spread over days or just minutes. Also he seems to take a lot of very odd decisions which kind of jar with the narrative. I'm sure a lot of us would do some strange things under that kind of stress, but it's never really explained. But overall still a worthwhile and interesting listen and a good insight into the life of a soldier

I understand how some can question the depth of the content and think some of it is bloated to fill out the book.

However, if you had spoken to him when he had finished the house clearance, he would have merely said something like, "f..k that was fun, I proper sh.t my pants fellas." or just honesty like, "that's why I'm a NCO, that's what we have trained for"

Many contacts in battle are forgotten as its a blur & we were just doing our jobs. Those who have never been in those situations and battle spaces can never really understand the pressure, mentality, gallows humour, professionalism along with the mental frailty of those who have.
The author has had plenty of time to think about what actually happened during that tour and that clearance, it would take a brave man to write waffle knowing that his men will probably read it, even if just to do a name check 😉
The author will not want to lose the respect his men will have for him by sowing such lies.

Strangely, you usually learn more about your part in a contact from others rather than your own memory, others see the near misses and majority of times what you hit or didn't hit, you, well you see and remember only the madness of your own moments , much is lost to your brain going into rotation after rotation of the training drilled into you.

Listen to the book, have an open mind and enjoy the war diary of an individual who is prepared to share his memories.

The story was fantastic but the narrator... blew me away! So much energy and passion, he really brought the story to life!

As a former infantryman this book really touched me. I was moved to tears at several points.

Excellent book, a bit repetitive at times but overall a very good book. The narration is great, this guy can do all the voices so well that really helps.
Would recommend this book to anyone interested in reading about war an war in Iraq, an the taking of Falluga.....⁉️

having experience of combat this whole story of him in the house comes across as a bloatig and inflated story. the cliche touch of the face and last minute crumbling of a supposedly 'high' insurgent leads me to believe that he was in a bad situation but bloated the story with riff raff and movie b.s

Beyond the Gung Ho

Once you get past the typical American Gung Ho attitude, it’s actually a very good listen. The story is very interesting and insightful. Very well told by the reader.

the Boogeyman encounter is so well written and you can feel all the emotions. A really good book covers all aspects of author grueling encounters in Fallujah.

I really enjoyed listening to this. It's powerful, well written and well read. The graphic details of the entire contents makes for a powerful listen

while I found the content interesting ,I was suprised in the delivery. It came across a bit immature with all the swearing and areas where insubordination was shown, it was almost like it was a Hollywood bass ass version written for the screen and not a true account? I did however feel his pain as he described the events in the latter stages and it gives a harrowing picture to what took place.