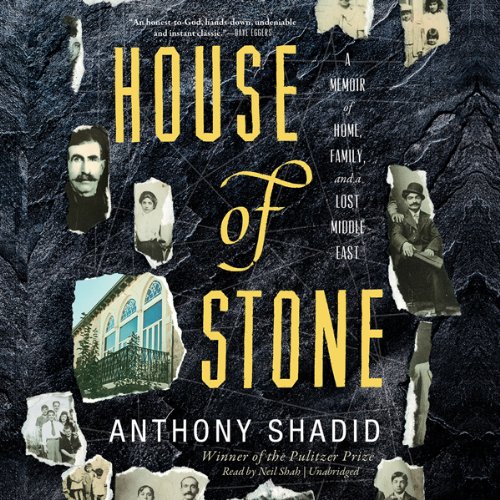 When Anthony Shadid—one of four New York Times reporters captured in Libya as the region erupted—was freed, he went home, not to Boston, Beirut, or Oklahoma, where he was raised by his Lebanese American family, but to an ancient estate built by his great-grandfather, a place filled with memories of a lost era when the Middle East was a world of grace, grandeur, and unexpected departures. For two years previous, Shadid had worked to reconstruct the house and restore his spirit after both had weathered war. Now the author of the award-winning Night Draws Near tells the story of the house’s re-creation, revealing its mysteries and recovering the lives that have passed through it. Shadid juxtaposes past and present as he traces the house’s renewal along with his family’s flight from Lebanon and resettlement in America. House of Stone is an unforgettable memoir of the world’s most volatile landscape and the universal yearning for home.

Anthony Shadid (1968-2012), an unparalleled chronicler of the human stories behind the news, gained attention and awards, including the Pulitzer Prize, for his front-page reports in the Washington Post from Iraq. He was the only American reporter there who spoke Arabic. As the senior Middle East correspondent for the New York Times, he earned his second Pulitzer.

©2012 Anthony Shadid (P)2012 Blackstone Audio, Inc.
“Shadid’s beautifully rendered memoir is a rich account of a man’s gradual immersion into the world of [the] Middle East where the rooms and hallways of his great-grandfather’s house tell stories that will linger with every reader for decades.” (André Aciman,  New York Times best-)selling author
“To some reporters, the Middle East is a ‘story.’ To Anthony Shadid, one of the best journalists working today, it is life itself. His love of the place and its people resonates in every word of this lovely book.” (Thomas E. Ricks,  New York Times best-selling author)
“Anthony Shadid has written a beautiful and timeless book about a broken place and a breaking man.  House of Stone is poignant, aching, and at times laugh-out-loud funny. It is a story of history and healing, and Shadid’s writing is so lyrical it’s like hearing a song.” (David Finkel, Pulitizer Prize–winning author of  The Good Soldiers)

Would you consider the audio edition of House of Stone to be better than the print version?

I benefit from audiobooks when much is in another language, or another accent from standard English. This Arabic-rich book is all the better for me. How else would I know how to say all these names, people, places, Arabic words?

Plus, the humor comes across wonderfully with the narration. Neil Shah gets the characters in Shadid's village just right. I hope it was fun to produce and perform.


Have you listened to any of Neil Shah’s other performances before? How does this one compare?

This is my first Neil Shah narration.

What made the experience of listening to House of Stone the most enjoyable?

A poignant and mostly optimistic story about the importance of history and place told through the experience of renovating an old home in Lebanon. For anyone who has ever dealt with contractors, it was also quite humorous with solid character development and vivid description of surroundings. The story reminds the reader of a once dignified and peaceful Middle East long ravaged by war. The renovation of the house is a metaphor for the possibilities of regaining some of that once proud history and the satisfaction derived from making the effort, however hard, to do so.

The author has pointed out in no uncertain terms, where not to go for a visit, and who not to engage to renovate my house. Lebanon and Lebanese workers! What a depressing book! Full of chauvinism, people living in the past and not wanting to move on, but worst of all, constantly complaining! Families plotting against each-other, getting sick and dying from unhealthy life-styles, and the only bright salvation in the book which was his daughter. However, she was just a quick walk on walk off part (in the distance)!! All that trauma of trying to get to see her on the last plane out of the airport, in Beirut, left me totally dangling when he did not even elaborate on the arrival to see her? The next chapter started without any mention of meeting up with her? It was like a whole chapter was missing? I also got the feeling that the author is primarily a journalist not a novelist. A lot of the scenes were very journalistic, with comments about the political crisis, etc, and the impact on people's lives. He had a view of people in general instead of "main character specific".

Wanted it to be better

Would you try another book from Anthony Shadid and/or Neil Shah?

What could Anthony Shadid have done to make this a more enjoyable book for you?

I found it difficult to stay engaged with the story. I suspect that people with more knowledge and familiarity with the area and the issues would find it more enlightening.

Would you listen to another book narrated by Neil Shah?

Only if the character's voice were actually supposed to have an accent. Since Anthony Shadid was from Oklahoma Shah's voice made the author's identity confusing for me.

Maybe--likely not. And I am an avid movie goer.