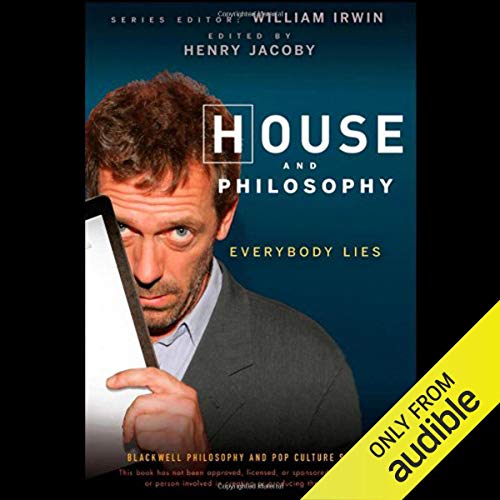 An unauthorized look at the philosophical issues raised by one of today's most popular television shows: House.

House is one of the top three television dramas on the air, pulling in more than 19 million viewers for each episode. This latest book in the popular Blackwell Philosophy and Pop Culture series takes a deeper look at the characters and issues raised in this Emmy Award-winning medical drama, offering entertaining answers to the fascinating ethical questions viewers have about Dr. Gregory House and his medical team.

Nice pointers to dive into a few philosophers

I loved the precise references to the episodes.

I found enlightning the reflections about House's methods, behaviour, and values. The discussion about moral values and utilitarianism is very educative as well.

Narration is at a few moments difficult to listen because the voice drops very low.

Lipstick on a pig?

Great! just what we need -- another banal attempt for would be philosophers and pedants to analyze popular culture and pretend to understand nuance.

Are we finally reduced to retro-fitting the "House" TV narrative to its philosophical roots? Apparently there IS a demand for classically based justification when watching TV. Who knew!! Is this the Holy Grail at last? Popular culture wed for eternity to the great ideas -- albeit posthumously?

IF the author's intent is to "prove" by association the inherent gravitas contained within the larger narrative arc of this well executed TV drama/guilty pleasure -- whose faux frankness is tastefully stage managed -- with a full seventeen minutes of carefully planned commercial breaks to further any rational distinction between what is real and what is real life -- then, BRAVO!!! MISSION ACCOMPLISHED.

SADLY, any assumed seriousness ultimately devolves into a thinly disguised manipulation of the "House" fan-base (and in this case, a clearly profitable manipulation). For me, the most successful part of this scholastic charade is the awkward delivery -- as though it was written for his thesis committee. Though, I doubt, given the author's nearly ridiculous level of theoretical rigidity -- that using philosophy to rationalize anti-social behavior generally ascribed to criminal sociopaths -- would have passed its first thesis defense. BUT that's because "House" is TV and in the TV version -- sans the strained poetry and philosophical interpretation -- we are not bound by the constraints of rational thinking. Which may account for the designation: Entertainment.

FYI : Following the "House" methodology, whether grounded in the philosophically correct or not, will generally lead to bloody noses and dates you have to pay a la carte.