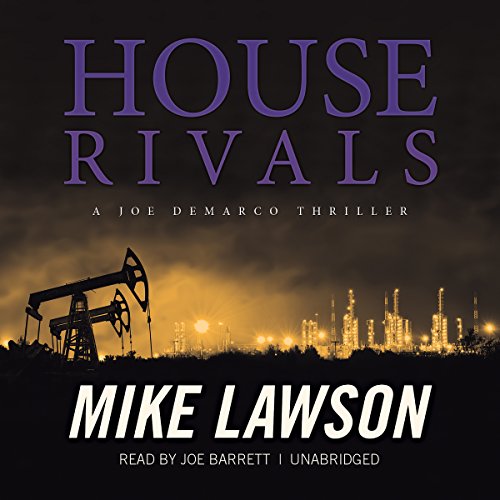 As a fixer for influential congressman John Mahoney in Washington, DC, Joe DeMarco has found himself in plenty of unexpected and dangerous situations. In House Rivals, DeMarco is taken further out of his element than ever before, sent to North Dakota to protect a passionate but naïve 22-year-old blogger who has put herself in harm's way.

The young woman is Sarah Johnson, whose grandfather saved Mahoney's life in Vietnam. For the past two years, Sarah has been on a relentless crusade against a billionaire oil tycoon who has profited handsomely from the natural gas boom in the Dakotas and who she believes has been bribing small-time politicians and judges to keep things in his favor. Though she has no hard evidence against the man, Sarah has been assaulted and received death threats for her meddling. DeMarco, given his years of experience bending the rules in DC, suspects that a middleman like himself is pulling strings for the tycoon. But as DeMarco tries to identify his adversaries, the situation turns unexpectedly violent, and DeMarco finds himself in a battle of wits against two ruthless problem solvers who will stop at nothing to win.

Have you listened to any of Joe Barrett’s other performances before? How does this one compare?

Joe Barrett is the voice of Joe DeMarco! As always he gave a Stellar performance! He narrates so well you would think he knows what the author was thinking when he wrote it as he seems to get all the right inflections at the right time. I am a definitely fan.

I love the Joe DeMarco series and have been looking so forward to this book coming out. My only gripe is that I thought it was too short. After the last book which was the BEST, this one did not measure up. I missed Emma and thought some details about Joe were left out. However if read as a stand alone without the previous books to compare it to I thought it was really a very good story. One thing I really enjoy about Mike Lawson's writing is how he intertwines DeMarco's nuances and nuisances into the story line to add real life humor. At the beginning of the book Joe has a mouse problem, he deals with an exterminator and tells him to do what ever needs to be done. You don't hear about the problem again until the end but it will leave you hysterical laughing. Murphy must be Joe's close relative but I like that he pretty much comes out of his situations unscathed. I sincerely hope Mike Lawson is writing another and if you're reading this could you make it longer please?
HIGHLY RECOMMENDED!!
If you found this review helpful please indicate so.

I have listened to all of the Joe DeMarco stories and they have all been good. This one was very good. I like seeing Joe do some of his own maneuvering -- He did not have any of the crazy friends to help him. And of course he was up to the challenge

I did have a lot of technical trouble with the book. It kept cutting out and I was missing parts of the book. I finally called audible - should have done it right away. They helped me beyond the help on the website. Got it fixed. No trouble after that. -- they were very quick and helpful

worth a credit. now I have to wait for the next one!

I am reading this series out of order as I based my purchase on reviews of humor in the story from other reviewer, Shelly. Only #6 to go and not sure why only one review. In this who-done-it mystery, there are some bark out loud laughter in early chapters, but the underlying theme is a sad one of Little Red Riding Hood. No Emma in this tale, but another character, Agent, is introduced and she has much potential. I laughed hard when she introduces herself. Love the John Mahoney character the best in each book and he does not disappoint in this tale, short appearances, but powerful. He is so irreverent, but such a patriot. I love Joe Barrett narrations of all Brian Haig, Sean Drummond series, these are not to be missed. I listen on 1.25x speed to match the adventure. Give it a try. So when I ran out of that series, found this author. I like both series as they can both easily be re listened. Were my comments of help.

Weakest of all of the Mike Lawson Books

This was not a Joe DeMarco Thriller, as advertised. In fact there was nothing thrilling about this book whatsoever. While I have enjoyed practically all of his books, Mike Lawson threw in a clunker this time. Save your money.