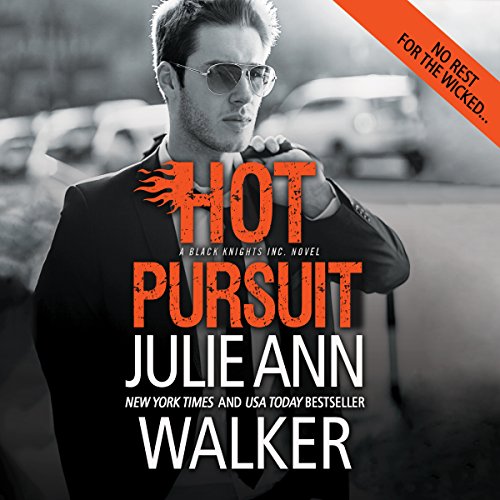 Christian Watson, a former SAS officer and current BKI operator, never thought he would return to England after a terrible turn of events forced him to abandon his homeland. But, now, he's back on British soil where old enemies are determined to do him in. Fighting for his life is pretty much SOP for Christian. Doing it with the beautiful, bossy Emily Scott in tow is another matter entirely.

Emily lost her coveted job at the CIA because of a colleague turned rogue, and now she has just one rule when it comes to men: they're for recreational purposes only. But when she and Christian are thrust into very close quarters while evading two mysterious men who want Christian dead, she can't help but question all her ideas about love and life lived on the edge. Battling the bad guys is hard enough, battling her feelings for Christian just might prove impossible.

So this was my first time listening to an Audiobook. I was skeptical because I didn’t think I could listen to someone reading to me as an adult. But Emily was great. Kept me into the book. I’m still going to read the book but it was great listening while cooking and driving and doing laundry. Of course Julie Ann Walker is a fave of mine so I knew the book would be good and I wasn’t disappointed!

I just love the Black Knights series. I’m not looking forward to this series ending.

Not up to others in the series

Struggled I to finish. the constant bickering took away from the story. I really love the series but hate this book.

I was looking forward to this book to continue the series and to find out Christian's story. I got to Chapter 3 or 4 when I couldn't take it anymore. Emily was why. For someone who worked for the CIA, she sounded and acted like a middle schooler with her actions and comments. Did she really have to mention to everyone about Christian's "pickle"? She was sitting in his lap while they were trying to get out of England. This started a very immature discussion with the others.

I want to know what happened with Spider but I just couldn't take Emily.

Loved the characters and humor in the story. Another Happy couple, although very different personalities.

Christian and Emily didn't disappoint! I really liked their story! It was kinda whirlwind, since it took place over a matter of days, but I already knew they belonged together, so it was nice to finally see it happen. I love how they snipe at each other, and learning about their pasts! I can't wait for the next one, although I am sad that it's the last one, since I wanted Ace and Rusty to have a book.

I really like this narrator, but her English accent leaves much to be desired, and I don't really like her male voices, except I didn't mind Ace's. I also didn't really care for Emily's voice, either. But she is still WAY better than the others who've read books in this series.

Not my favorite of the series

I’ve loved this series, but this one fell somewhat flat. It was filled with overused cliches and lacked the depth of the other books. I realize that was Part of Emily’s character, but it really began to interfere with the enjoyment I should have gotten from the story.

If you’ve read the series, you need to listen to this one just to stay on top of what’s going on. I did, however, want to not bother finishing it several times.

The voice of the reader sounds like the boy from TV series, The Goldbergs. I could not listen to more than one chapter.

I can’t comment on the story for this book and it may be brilliant but I had to stop listening as the narration is appalling. It sounded as if it had been read by a computer- my 5 year old reads with more emotion. Complete waste of money.

Weakest book in the series

I hate giving up on books but I've really struggled with this audio book. I've enjoyed all the others in the series, and was looking forward to this one but I've been battling with it right from the beginning.

Firstly, if you're British you'll find the accents absolutely impossible to listen to! Rip your ears out terrible. The narrator's crappy English accent wasn't so noticeable in previous stories as Christian's only appeared briefly in them but as he's the main character in this story it really stands out. The author's Britishisms are also rubbish and grating, we don't walk around saying things like "blimey"!

Then there's the weak storyline. The romance between Christian and Emily feels forced and like the author had run out of characters to put together.

No idea what happens in the end as I've tried 3 times to listen to this audiobook in the hope the story would get better, but it didn't and I can't bear to listen any more.