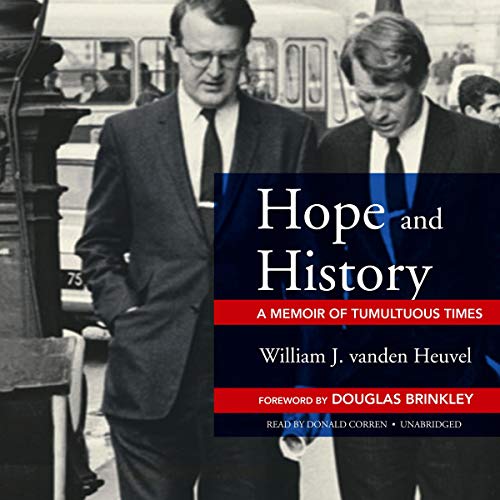 Hope and History is both a memoir and a call to action for the renewal of faith in democracy and America.

US Ambassador William J. vanden Heuvel presents his most important public speeches and writings, compiled and presented over eight decades of adventure and public service, woven together with anecdotes of his colorful life as a second-generation American, a soldier, a lawyer, a political activist, and a diplomat. He touches upon themes that resonate as much today as they did when he first encountered them: the impact of heroes and mentors, the tragedy of the Vietnam War, the problems of racism and desegregation in America, tackling the crisis in America's prisons, America and the Holocaust, and the plight and promise of the United Nations. Along the way, he allows us to share his journey with some of the great characters of American history: Eleanor Roosevelt, William J. "Wild Bill" Donovan, President John F. Kennedy and RFK, Harry S. Truman, and Jimmy Carter.

Throughout, vanden Heuvel persuades us that there is still room for optimism in public life. He shows how individuals, himself among them, have tackled some of America's most intractable domestic and foreign policy issues with ingenuity and goodwill, particularly under the leadership of President Franklin D. Roosevelt and those who sought and still seek to follow in his footsteps. He is not afraid to challenge the hatred and bigotry that are an unfortunate but undeniable part of the American fabric. He exhorts us to embrace all the challenges and opportunities that life in the United States can offer.

The Memoir of Witness to History

Ambassador William J. van den Heuvel (father of The Nation’s Katrina Camden Heuvel) recalls his upbringing in the era of FDR and his work alongside some of the legendary characters of the past century, including William J. (Wild Bill) Donovan, JFK, RFK, and Jimmy Carter. It includes both his current recollection and contemporaneous speeches addressing the issues of the day.
A man of great dignity and with an enormous love for his country, he contrasts with many of the current country's leaders. He represents the best of the United States.

One of the best out there

I never heard of this gentleman except for being UN Representative. Amazing how many facets of life he touched and was touched by. Worth your time.