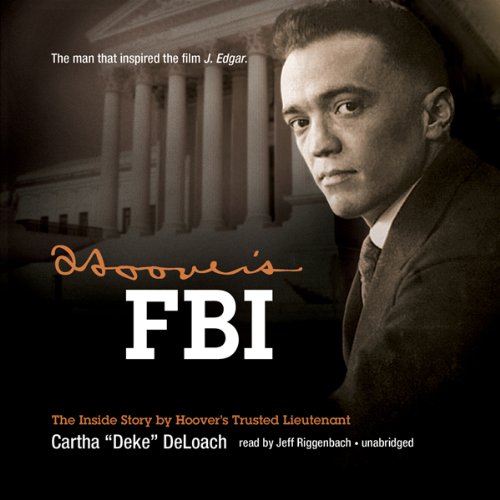 As director of the FBI for over five decades, J. Edgar Hoover left a profound and lasting legacy on this most celebrated institution. Only the few who were part of Hoover's inner circle know the truth about his controversial years of authoritarian rule and the organization's inmost secrets.

One of Hoover's trusted deputies, DeLoach gives us the most authentic account ever written of the FBI, setting the record straight about questions that have plagued modern history. From the assassinations of John F. Kennedy and Martin Luther King, Jr., to the FBI crusades against organized crime and the Communist Party, to Hoover's disputed sexual orientation and the secret files he allegedly kept to blackmail hostile members of Congress, here is the gripping narrative of a government agency caught on a tightrope between presidential administrations and the limits of the law.

Great book, well written and very informative. I enjoyed the first hand information from someone who was actually there. I lived in the DC area during Hoover's time and remember it all. Cartha DeLoach tells the story like he lived it and loved it.

The story being told by the author is fairly obvious (especially to those of us who were adults during much of that time and realized the truth), but it's one that must be told.

It's hard to believe that this book was published over 10 years ago, and still the media and the entertainment industry insist on portraying Hoover as a cross-dresser and one who spied capriciously on "law-abiding US citizens."

The violence inherent in the policies of the protestors of the 60s and 70s warranted keeping an eye on them ("burn down the cities; kill members of the establishment, etc." As I said, we who remember those things which were being advocated by these groups, saw no reason why such violence-prone organizations should have went unwatched.)

Nor is DeLoach afraid to show Hoover's warts and faults along with his dedication. He points out Hoover's egocentric nature, his petty grudges and his biases.

Sometimes the truth hurts, and the many truths contained in this book, though painful to some cultural icons, needed to see the light of day.

There are certainly some very interesting FBI stories in here and they make the book worth listening to. I found the description of the Mississippi Burning investigation especially interesting.

However, the author is an uncritical Hoover-apologist. So, the long-defenses of Hoover's actions, racial attitudes, etc. are tedious. While I have no doubt that some criticisms of Hoover over the years are exaggerated, the author destroys the credibility he might have had in assessing Hoover by consistently rejecting any criticism of Hoover at all as the result of various ill-defined left-wing conspiracies. If you are hoping for some sort of objective analysis of Hoover as FBI Director, this will not provide it. But, if you like good stories about detective-work, this has a fair amount--especially in the last 2/3rds of the book.

I recommend skipping the entire chapter on Hoover's sexual orientation. Other than the basic cross-dressings rumors that everyone knows, I had never given all that much thought to Hoover's sexual orientation before. But, DeLoach's full-court press to convince the reader that Hoover wasn't gay is loaded with homophobia from another era. I really cringed at times realizing that, not so long ago, a lot of people out there probably thought of homosexuality the same way DeLoach does. Anywho, his effort to convince the reader that Hoover was straight has the opposite effect of convincing the reader that he was in fact gay. Sure the cross-dressing rumors seem to be unfounded but the gay thing is pretty obvious from DeLoach's effort to argue otherwise.

Sadly, the recording sounds like it was done over speakerphone--well-below the quality of the other Audible books I have purchased. Also, the reader has at least a dozen or so glaring mispronunciations. I'm not a stickler for these things usually, but some are over words you've probably been using regularly since high-school--not things that should have slipped through.

Little of Value Here for Historians...

This really is a most sad effort from an official who came close to becoming Hoover's successor during the mid-60s. DeLoach has a strong and maddening tendency to stretch the truth, often making contradictory statements and points even within the same paragraph. Dripping with hollow forced apologies for Hoover, DeLoach is also prone to paranoia, deceit, racism, sexism, pettiness and an almost complete misunderstanding of the important and direct criticisms of the FBI during this era. His most egregious shortcomings (among many) come in the discussion of the FBI and the Reverend Martin Luther King. In addition to pointing out the race of every Black person in the book for no apparent reason, DeLoach tries in vain to convince the reader that King was not truly non-violent or even a Christian. King is also ridiculously named a communist, which then gives justification to the FBI to constantly bug him but also becomes the basis for the FBI's dirty tricks campaign against King and the 1960s Civil Rights Movement. Stupidly, the FBI's efforts to attack the non-violent King led to marginalization of non-violent tactics thus giving way to the rise of the violent Black Power Movement and an increase in the number and ferocity of urban riots. According to DeLoach, the never close to be proven communist allegations against King justified the FBI's entire campaign of stupid and illegal harassment of King. This leads him to conclude that King "got what he deserved" on April 4, 1968 in Memphis, a death which resulted in riots in over 100 US cities and millions of broken hearts. Also, the reader is treated to DeLoach's insane statement that the Civil Rights campaign caused Watergate. It's impossible to say if DeLoach actually believes his distortions, lies and delusions. The main contribution of the book is to allow the reader inside the mind of people like Hoover, DeLoach, Nixon, et al. For the same reason that General Westmoreland's account of the Vietnam War must be read. Not as a factual contribution to the historical record, but instead as the account of men as fallible false witnesses to the tragedies of our times and life.

This book written by the 2nd ranking assistant to J. Edgar Hoover provides exacting detail about the life of Hoover and the numerous high profile investigations during his tenure. DeLoach spends a lot of time combatting claims about his old boss--so much time that he appears to be an apologist or loyal defender of Hoover according no credibility to other authors' claims about the allegedly sordid life of Hoover. However, it is still a great book that chronicles the evolution of criminal investigation over Hoover's decades at the FBI.

Excellent insight to Hooverdom. The good stuff ... and the true stuff. If you're still interested in learning more about Hoover this book fills in a lot of blanks and dark corners.

Sounds like this guy was real devoted to Hoover - Hoover could do no wrong. Most of the rumors about Hoover seem to be all wrong according to the author. I do NOT believe him. Otherwise a good listen.

Interesting to hear from the number three man at the FBI during the Hoover years. I will definitely read more about the subject.

outdated and tends to be self-serving.

Fairly trpical review of a bureaucrats career as viewed thru rose-coloured glasses. strangely organized, at times chronological, at other times thematic, but it generally worked. i enjoyed the book but would recommend to others a more recent accounting. much has come to light since this was originally written!

will open up your eyes

Media and many on all sides of our culture have perpetuated lies about Hoover and many others. this book is very enlightening.

give you an insite into the inside workings of hoovers FBI and hoover himself., lots of things you thought you knew are wrong about the man and the FBI opened my eyes

Hoovering up the facts.

I'm very glad I brought this book, it's cleared away the rumours surrounding Edgar J Hoover and his years director of the F. B. I. Although a bit boring in a few places, and the jumping back and forward, this is a book is a very good listen