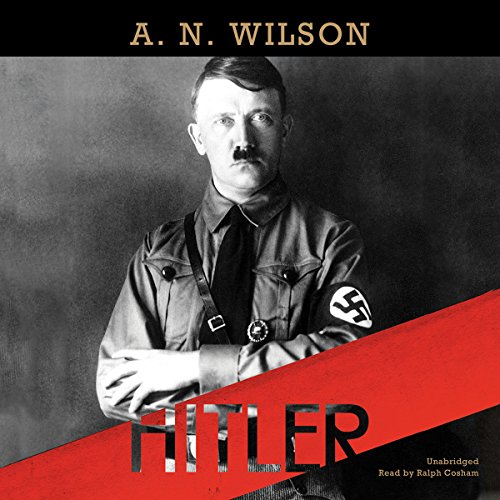 Written by acclaimed biographer A. N. Wilson, Hitler is a short, sharp, gripping account of one of the 20th century’s most notorious figures. In it, Wilson offers a fresh interpretation of the life of the “ultimate demon-tyrant of history".

In 1923, 34-year-old Adolf Hitler was languishing in prison after leading an unsuccessful putsch to overthrow the German government. Within a decade he was German chancellor, one of the most powerful men in Europe. How did he do it? Had Hitler been a regular politician, Wilson argues, he would have vanished without trace after his prison experience. He was not, however, a regular politician but rather a conjurer, seeing politics not as the art of the possible but as the art of the impossible.

Among the book’s many insights, Wilson shows how Hitler had an intuitive sense, which amounted to genius, that the spoken word was going to be of more significance than the written word during the 20th century. In this respect, the Führer is presented as a man ahead of his time, who foreshadowed Hollywood and television stars and postwar politicians.

In a field dense with lengthy tomes, this brief, penetrating portrait provides a compelling introduction to a man whose evil continues to fascinate and appall.

A. N. Wilson, a renowned British journalist and author, has written several acclaimed biographies, including Tolstoy, C. S. Lewis, Jesus, and Paul. He taught for seven years at Oxford and is a frequent contributor to the Daily Mail, Times Literary Supplement, New Statesman, Spectator, and Observer.

©2012 A. N. Wilson (P)2012 Blackstone Audio, Inc.
“The author once again gives us a multifaceted portrait of an era. Like its predecessors, the book is enlivened by Mr. Wilson’s gift for anecdote [and] character analysis.” ( Wall Street Journal)
“The award-winning journalist, biographer, and novelist offers a short, often-pugnacious biography of the Führer....A useful, even entertaining, life of Hitler.” ( Kirkus Reviews)

This book should be fact checked. The bit about Fritz Busch is fantasy. It reduces Busch’s heroic stand against Hitler to his being Jewish, which in fact, he was not. What others ?

I am awfully sorry you feel that way about Mr. Churchill and the Armed Forces of the world, in general. Do you want to talk about this sometime? We could go over this after you've finished reading Toland.

Historically slanted towards the writer's views

If you’ve listened to books by A. N. Wilson before, how does this one compare?

I think he writes things that in ways might be accurate historically but he slants them toward his own viewpoint.

Did Ralph Cosham do a good job differentiating all the characters? How?

Could you see Hitler being made into a movie or a TV series? Who should the stars be?

No. This book is much too pedestrian.

I wouldn't recommend it. There are better books on the subject.