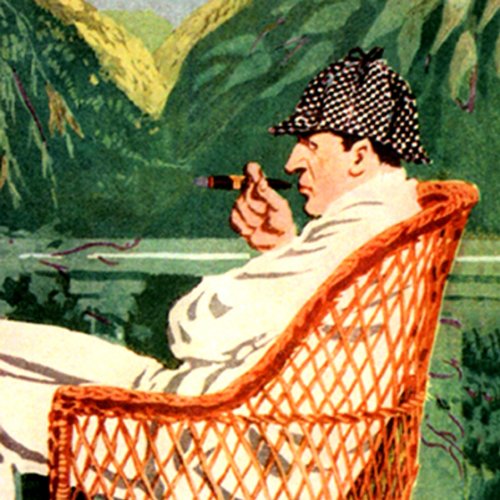 Gathering together in one volume the later exploits of Sherlock Holmes, the world's first consulting detective, His Last Bow includes tales published individually between 1908 and 1917. It also contains one early story, 1892's "The Adventure of the Cardboard Box", which, with its themes of adultery, was previously considered too "scandalous" for American audiences.

Some Interesting Criminal Grotesques, but…

SImon Prebble does a great Holmes and a spot on Watson, and His Last Bow (1917?) does have its moments, and Conan Doyle is ever a fine writer, and I like the device he frequently uses of the story within a story (as when Watson depicts suspects or clients telling their stories to Holmes). But… am I beginning to tire of Sherlock Holmes stories, having worked through all of them except those in The Casebook of Sherlock Holmes?

"The Adventure of the Wisteria Lodge" opens with a conservative bachelor who feels ill used by a mysterious new acquaintance called Garcia and his grotesque servants and then morphs into a tale of patriots trying to achieve justice against the cruel and greedy dictator who traumatized their Central American country San Pedro and then absconded with his ill gotten gains. Throughout the story, Holmes has, for once, a competent local detective rival.

"The Adventure of the Cardboard Box" features severed human ears packed in salt and some ungovernable adulterous passions.

"The Adventure of the Red Circle" concerns the long reach of Italian American organized crime (and feels like others of Holmes' stories that deal with organized crime and star-crossed lovers).

"The Adventure of the Bruce-Partington Plans" deals with a corpse found in the London tube without his ticket and with some top secret plans for a new type of submarine. It reminds me of the earlier Holmes story "The Naval Treaty" and disappointingly depicts Mycroft Holmes as a man with an important job.

"The Adventure of the Dying Detective" features a brilliant villain who is to microbes as Holmes is to criminals (but the best part of the story may be its title).

In "The Disappearance of Lady Frances Carfax" autumnal love is interfered with by an amoral Australian con man.

In the entertaining "The Adventure of the Devil's Foot" we witness an egregious example of Holmes' reckless experimentation that ends up displaying the depths and powers of Watson's affection for him.

"His Last Bow," published in 1917 during WWI, is an uninspiring third person story not narrated by Watson and deals with international intrigue between patriotic Brits and cocky and slimy Germans. The best part of it shows Holmes' interests after retirement from crime solving.