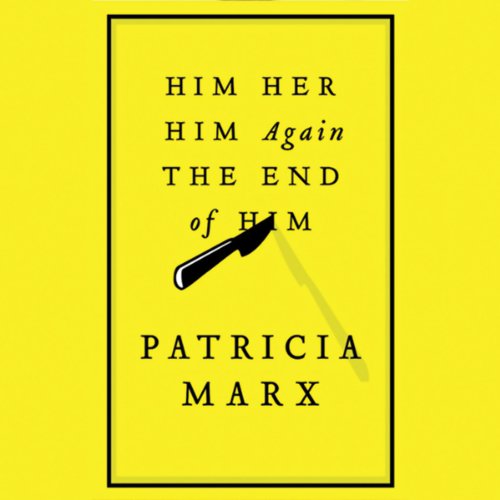 Him Her Him Again the End of Him

A neurotic young graduate student looking for distraction from her doomed thesis is inexplicably swept off her feet by a narcissistic philosophy professor. The obsession continues even after he has dumped her for someone even needier and she has given up on school and become a television writer. Meeting again in New York, they begin an adulterous affair that, of course, can only end in some kind of crisis.

Smart, lively, and original, Him Her Him Again the End of Him is an endlessly entertaining re-imagining of the comedy of manners.

"Alert, alive, and funny. I laughed at its audacity and cried that I didn't write it." (Steve Martin)

No Humor Still No Humor End of Humor

This is a depressing book. I bought it because of Steve Martin's recommendation. I wonder if he read it. or he owed someone a favor. I guess I just do not see the humor in a woman who is devoted to a man who takes her for granted and she requires a full decade to come to her senses. Ha ha! I would have rather seen the end of her, and a lot sooner. I listened to the WHOLE book waiting for redemption, but it never arrived. If this is "dry" humor, it's way too dry for me.

Him, Her, Him Again, The End of Him

Someone suggested this book as an amusing summer read for our book group. Not amusing at all. Simply annoying. Pages and pages are devoted to lists. Once it might be slightly amusing, but the technique is used twice, thrice, 4x, 5x, and more. So it becomes simply boring. And annoying. How a character who, at the beginning of the book, is working toward a PhD at Cambridge, yet styles herself as having fewer brains than a stereotypical bubblebrain, is supposed to be believeable is beyond me. And her obsession with a syncophantic bore is also unbelieveable. Not funny, just annoying.
The book sounds as if written by a group of friends who thought themselves very funny but forgot to check outside their own group. My sister was the smartest of us all, throwing the book across the room at page 12. The rest of us are simply angry that we'd spend money on it.

Do Not Operate ANY Machinary While Listening

At first, I thought this book was simply a poor match between story line and narrator. Then I realized this book was simply poorly written. There is no substance to the character; no growth. The way in which the author filled the passages with a long - winded roll call of "friends" and their opinions was painful to both my ears and psyche. Don't bother! Her monotoned delivery will have you falling asleep at the wheel of whatever you are operating.

I couldn't even finish this; it was that bad. Narrator doesn't help, but didn't find any humor nor any characters worth investing in.

The best part about this book is that it gave me hope that I could be published.

Waste of time and money

The book will not give you any lesson. This book is just for entertainment but not for self help or helping those who are moving on from a breakup.

really enjoyed the actual story, but the narrator was completely off-putting, struggled through it despite how grating her voice was.
Wish I had have just bought the book, would have enjoyed it more.