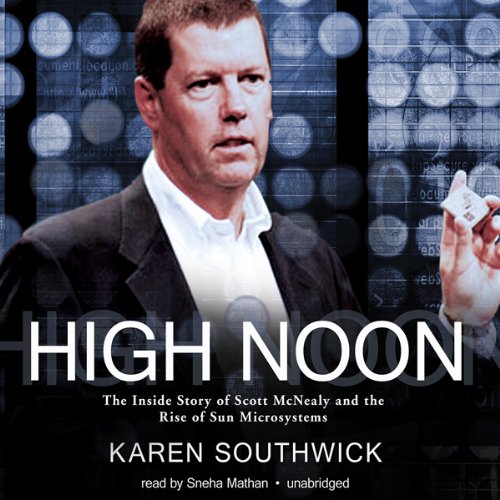 In 1982, a little upstart named Sun was making waves in the high-tech industry with its groundbreaking workstation technology, even as early competitors dismissed the company as not worth losing sleep over. Since then, Sun Microsystems has become a formidable presence in the industry, making its own rules and taking no prisoners, and is currently poised to reach the highest point of its ascendancy - the challenge of Microsoft's dominance over the future of computing.

The driving force behind this once fledgling company is a man who has been described as brash, unconventional, ambitious, forward-looking, and sometimes even his own worst enemy. Scott McNealy turned Sun into the multibillion-dollar success it is today - a developer of innovative software like Java that is revolutionizing the computing landscape.

High Noon is the inside story of Sun's rise to power, from its shaky start in Silicon Valley through its transformation under the aggressive and inspirational leadership of McNealy. Karen Southwick reveals the behind-the-scenes maneuverings of McNealy and Sun, with candid interviews from the key players and insights into the inner workings of the high-tech industry.

I hung on for a couple of hours, but eventually gave up on this one. It read like a side-bar profile for Time Magazine put together by SUN pr. It's not that I was looking for a hatchet job, but this was cringingy flattering. I thought that "The Second Coming of Steve Jobs" was a much better example in the same genre.

As other have remarked the sound levels leave something to be desired too.

I learned very little from this book about the history of Sun or McNealy, other than that they managed to convince the author of this book that they can do no wrong. Unfortunately, events since the books publication suggest otherwise.

I confirmed the book has several corrupt chapters on multiple device platforms.

Not everyone will feel this way, but the narrator ruined this book for me. The subject matter--behind the scenes Silicon Valley tech--was just not made for a very proper-sounding Englishwoman. There are probably not half a dozen techies in the valley who could pronounce "raison d'etre" with a flawless French accent; hearing it in the audiobook just sounded out of place.

Having said that, the material is worth the price of admission for those who are in the industry or just love a good behind-the-scenes business yarn.

A fascinating look into the making and the politics of Sun Microsystems, probably the number two tech company behind Microsoft. Well written, and seems thoroughly researched. Good narration.

This books starts off quite well, but quickly becomes fairly dull. It reads more like a ledger of facts rather than the inside account that it claims to be, there's very little human interest here. But most damning is the book only takes you up to the year 2000, it needs updating.