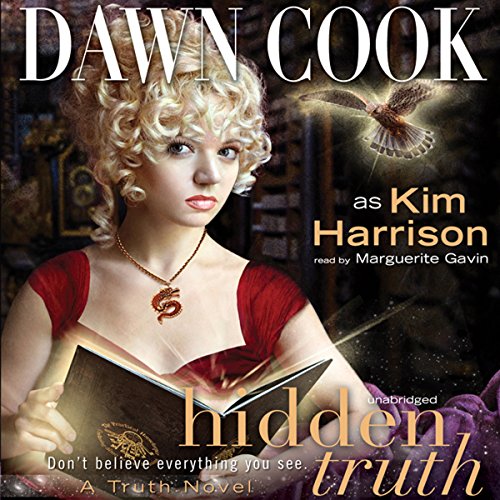 Alissa never believed in magic. But then she went to the Hold, a legendary fortress where human Keepers once learned magic from enigmatic Masters. Under the tutelage of the last surviving Master, Alissa discovered that she had inherited her father’s magical ability.

But the Hold is ruled by Bailic, the renegade Keeper who seized the First Truth, a book of magic he will use to harness the might of the city of the dead and wreak a war of total devastation. The book has thwarted Bailic’s every attempt to access it, while it continually calls to Alissa—who must summon all her will to resist it. For if she gives in to the First Truth’s ultimate power and knowledge, she will be utterly changed—and the man she loves could be lost to her forever.

This is the second book in the Truth Series by Dawn Cook, who also writes under the pen name Kim Harrison.

I had enjoyed the first book in this series, but I found that this second book was harder to get through, and a lot less believable. The main character, Alissa, ruins the story with her childish, immature behavior. She refuses to listen to anyone else, and then seems shocked when her bad behavior results in making bad situations worse. I've seen toddlers behave with more self control that this character has. I found her to be very unlikable in this book. Some of the scenes in this book were not very believable either. Without spoiling the story, I would have to say that one character's lack of response to a life and death issue simply because he didn't want to mess up his room is a shockingly amature twist in a storyline. Even Marguerite's fantastic narration couldn't save this story. Needless to say, I won't be buying anymore of the books in this series.

This series is really growing on me and I find myself unable to stop listening. The narrator is getting better as well.

The heroine in the story makes me think of a somewhat of a PG fairy tale version of the heroine Jane Yellowrock in the series of the same name. Toned down from an Urban Fantasy featuring lots of gore to a simple country or nature fairy tale fantasy featuring dragons and damsels in distress. Mainly because of the "alter ego" aspect of her "beast".
I like stories with good, detailed character development, and Dawn Cook always does that well. But I am very disappointed in the cover art, the young lady heroine in this story is NOT a princess with a pet bird, as the cover image suggests with her jewelry, revealing blouses, plump "bee stung" lips, ivory complexion, Hazel Green eyes and mass of spiral curled blond tresses. I realize that the Cover image needs to be captivating but captivate honestly somehow! The actual character is slight, has "straight light colored hair" that was "chopped off" roughly and too short to tie back with a ribbon. She has plain "grey eyes", and the darker tanned skin of a farm girl (described in the ravine scene when her socks are removed).
every time I run across a description that contradicts the image on the cover it just makes it that much harder for me to picture the heroin in my mind much less any of her companions! the personality of the men as well as established but not so much their looks build height or much of anything else really I'm in the third book now and just found out that Useless has cropped white hair.
I do like the creativity of the magic and world view concepts, but not so much that there is only 1 woman with all the teenage angst against following traditional paths imposed because she IS female.
Overall a good, light-hearted listen, and easy to catch up if I miss a bit due to distractions.

I have listen to this series at least five times (I have not kept track) and I am listening again. I simply love how Marguerite Gavin reads this story. She give a unique voice to each characters and her male voices are believable. The story itself is great and I highly recommend it.

In this sequel everything begins just as the first book ended. Alissa had found the book called the First Truth. The book pulls at her and Alissa find it almost unbearable to not give in and just take the book. She knows that would cause her untimely death by Bailic. Bailic is too smart to let anyone get that close to the book. Alissa realizes that magic really did exist. She discovered that she possessed the power of magic. Her father also had magic and she inherited his gift. Once Alissa gets her hand on the First Truth she is overpowered by sheer magic and something happens that has never ever happened to her before, she shifts. Her body transforms to a Rakus, master of the Hold. Alissas feral beast inside wants to fly and be free. If she can't be kept grounded, Alissa could be lost forever. Kim Harrison did a magnificent job creating this series of books. Its a brilliant story with such a vivid imagination from the author. Its a beautiful work of art. This is a must listen to. You will enjoy this sequel of books. You must purchase the Truth series. If you do you have to get them in order starting with book 1,The First Truth,2nd book is Hidden Truth, 3rd book is Forgotten Truth, and the last book is called Lost Truth. If you have ever read Kim Harrison's books then you will be mesmerized and the beautiful series will not disappoint.

I am going to write this once. It is for the whole series. Not just this one book. Loved every second of it. The characters will all remain with me, I feel like we all have become friends. They felt so real and I was sad when the credits started, knowing it was the end of a beautiful story.

I'm a Dawn Cook - aka - Kim Harrison Fan. I enjoyed the book. I will listen again & again. Read/listen to the First Truth first. This is not a stand alone book. You will be lost or Confused if you skip the 1st Book.

I loved this story and the narrator was great as always. I have become a fan of Dawn Cook's writings and this one did not disappoint. On to the next book.

Kept me going from the beginning, I'm hooked now.

If I'd known who the true author was, I would have found this series sooner. I am a fan of Kim Harrison and thought that I had read everything of hers. Marguerite Gavin is worth following as well. Marguerite brings to life everything she narrates. Anyone who listens to a lot of audio books know that even a great book can be reined by the wrong narrater.

Loved this story, too fast paced though and I felt like the end was a cop-out.