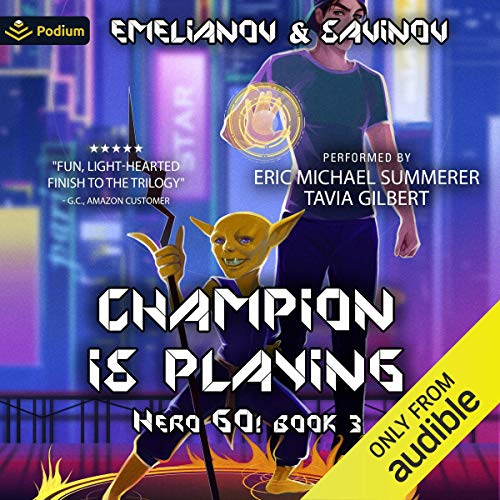 The world has been saved; life is beautiful and everyone loves and appreciates the hero, even though they have put him in some godforsaken place. To keep him safe, or so they say.... But it's too boring there!

Only at first glance, however, because entertainment can be found anywhere and the street phase of the world tournament, Battle of the Champions, is just the right thing to pass the time, especially if some divine gifts are taken into consideration, which, regardless of his unique strategic and tactical talent, seriously complicate his life.

This is a new challenge for an ordinary guy from the year 2010 who has found himself in the world of the future.... Will he still be the champion?

you went from full immersion game for two books to a bad pokemon fan fiction. Terrible and sad. wrong series, ruined it.

Great finish to the series!

First book was RTS, second was MOBA, and this one is Pokemon Go! I really loved the over the top humor, and the Pokemon-like stilted dialogue before the fights. This whole series was really clever, and this book did not disappoint!

The main character only became a character you want to hate more rather than actually improving as a person.

I really enjoyed the other ones

This story was hard to follow I was confused in a few places what exactly was going on. Maybe it didn’t translate well or I missed something. Either way I liked the idea of this but didn’t enjoy the execution.

Definitely shows you how people will explain away of why and how people act based on their perception of others rather than actually asking why and how from the subject in question.

I was skeptical that a 3rd book could be made and that I would believe the ending to this strange MC, but it lived up to the first two and am immensely happy with the ending.

This book series is a work of art and my favorite series of all time. I’d love to meet the authors to shake their hands. The voice actors are amazing as well and bring it all to life. Every time I listen to the series I laugh out loud and catch little things I missed before. Absolutely amazing.

Pokemon Go with guns. Good enough to listen while doing chores or working but not something I could just sit down and listen. Unlike the 2 previous books, this one didn’t fully grab my attention, my mind kept wondering and I kept having to go back a few minutes because I didn’t pay attention to things happening in the story.

disappointing compared to the first two. became just some pokemon go stuff. honestly though this mc has been painful the whole series. misinterpreting reactions is laughable. sorry dudes a shudder from a lady you sit next to is not pleasure. it's disgust. i feel like the mc is a collection of mildly toxic males in gaming pulled from redit who all cant unerstand social situations and poured into one guy like a joke. it was the only way i could get through the other two was i thought this was satire. so cringe worthy.

I saw someone didn't like that the main character wasn't playing a game anymore, and that his reality had become a game. I found that amusing, since the biggest trope in pokemon-type games (such as digimon) is that somehow beasts magically appear in the real world.

Not only that, but the end of book two technically makes his current reality possible, since the end of the second book is what caused the beginning of the first book's reality (which literally had monsters invading the planet, so it's not out of line with the plot at all).

This is a comedy with some mysticism-based time looping and some sci-fi game tech. It takes different genres of videogames, tells a cute and very funny action story, and basically uses magic to make it all possible.

I personally love the series because you can tell the person enjoys all of the different game genres. The third book ended on a good spot, even if no more are made, it's a good ending.