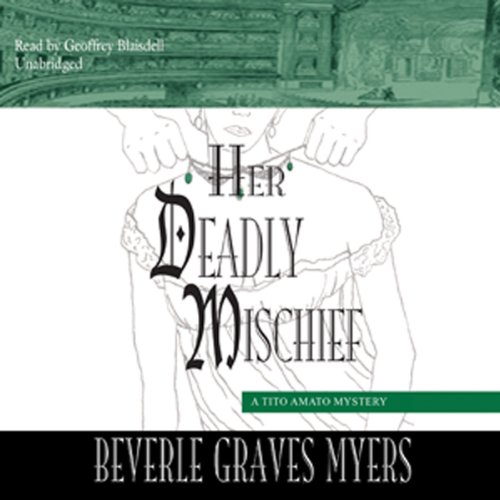 In Venice in 1742, Tito Amato is singing lead roles at the Teatro San Marco. On opening night, he has the entire audience entranced, except for one box with its scarlet curtains tightly drawn. Is this a lovers' assignation or a meeting deep in political intrigue?

Annoyed at being ignored, Tito aims the full force of his golden throat at the fourth-tier box and is astounded when the curtains part and a woman tumbles over the railing.

The victim is Zulietta Giardino, a mischievous courtesan involved with a young glassmaker. As Tito was the only one to see the masked man who pushed Zulietta to her death, the chief of Venice's rudimentary police force requests the singer's assistance. Did a wager over a rival courtesan's jewels spell Zulietta's death? Or did the motive involve sinister events in the glass factories of Murano?

Rarely am I able to figure out plot twists or "who dun it" in advance of the characters. That isn't why I listen to mysteries. I like to enjoy the way the protagonist unfolds the story. I knew where this story was going before Tito did. That being said, this was still a very enjoyable listen. The castrato was particular to Venice and Italy. It took a cd before I was really comfortable with the narrator but then he was perfect. This is an interesting walk on the unusual side of normal. I've bought more of Tito's adventures so yes, despite the tone, this is a very positive review!

Interesting but Not Great

I got this book because I am fond of Opera and am familiar with Baroque Opera and the age of the Castrato.

In one sense it lived up to my expectations with lots of details about goings-on in the opera house as the various castrati vie for leading roles.

The mystery was quite inriguing and of course since it took place in the opera house led to a lot of details about Opera of the period. It was a plot full of novel twists and turns and certainly the ending was quite unexpected. It is very well-plotted and the suspense held your interest.

However, it sagged a bit in the middle and I think this is due to the presence of the female character Leah and her family in the Jewish Ghetto. I really found that part of the book dull and uninteresting and while it was well integrated into the plot I think it took up far too much time. I had little interest in Leah and the little boy -- I don't really go for mystery books that have a family involvement like this. I find they tend to drag as the writer takes time from the mystery to go into details about the family. I really prefer my detective to be unencumbered with a family as it become too distracting.

I think the presence of Leah and the importance the author attaches to her will prevent me from reading anymore books in the series. However if you like the family as part of a mystery this should appeal to you. However, I found Leah rather whiny as too often females in detective fiction can be and her interest in Tarot cards and foretelling I found a bit overdone.

The narrator was excellence and did and outstanding job of having different and suitable voices for ll the characters.

Once again a riveting mystery from this quickly becoming my favourite author!

Tito Amado once again draws us into the world of Venice of times past to unravel another mysterious death. Good pace and characterisations. The historical information vivid and the plots meaty and satisfying. Not a cozy mystery as this has more depth and colour! Like an exotic sweetmeat, to be savoured!

Quite a pleasant Venetian tale weaving a murder mystery through the Jewish ghetto and the operatic arias of the Castrato hero but almost teeth grindingly awful narrator whose pompous tone and mispronunciations made it a bit of an endurance test to listen to. I would have read the next one if the narrator had changed but no... he reads three of them!