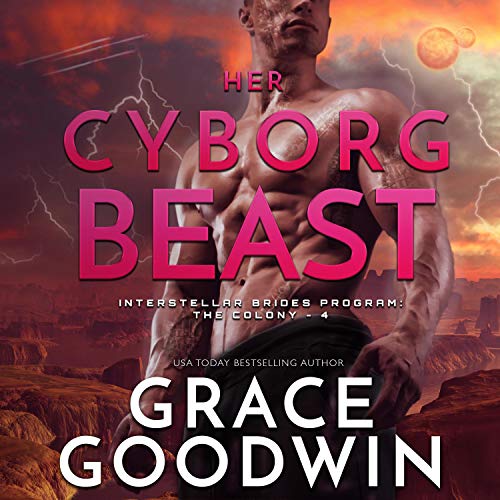 Caroline Jane (CJ) Ellison has a gift for analysis. When a Wall Street deal goes bad, the choice between prison or the Interstellar Brides Program is a no-brainer. She’ll go. She’ll leave Earth, her past, and her mistakes behind. The decision is logical, not emotional. Until she wakes up on another world with a huge Atlan Warlord, her matched mate, refusing to claim her.

Warlord Rezzer is contaminated. Weak. The Hive captured him and stole his soul, his very beast. A mate is out of the question when he can’t become what he was born to be, a beast, her mate, her protector. Forced into the Brides Program testing against his will, Rezzer has no intention of claiming the beautiful, sassy female who arrives on the Colony. The Hive stole his beast, but not his honor. He vows to give her to another, a worthy male, a beast who is whole - one not hunted by the Hive as part of a dangerous new experiment to win the war.

CJ takes one look at the wounded warrior before her and knows she will never be able to let him walk away. He’s hers now, her perfect match. And if that means she has to seduce the beast or face off with the Hive to save him...that’s exactly what she’s going to do. She lived her life following the rules. With everything on the line, it’s time to break them.

This one has a pretty interesting story. The hives wanted to suppress the beast of an Atlan warrior and try to produce hives with no contamination. But having him meet his interstellar bride changed that. The colony now has more babies around. I love all of MS Goodwin''s story. Every single one. Happy listening!!!

Another great installment in this series; each book has something a little different than the others to keep it interesting. This one made me laugh in how the characters dealt with each other; there personal thoughts read out loud. She knew how to deal with him; but seems once she got him where she wanted him, she went from being strong to self-doubt and wimpy? All of the books seem to go in this direction which makes no sense to me. Narrators did a great job! Onto the next book!

The storyline is once again very good .. enjoying the colony spin off very much

I've read several of her books. they aren't that deep, but they are concise and pack a sexy punch. love these quick reads

I truly loved this story better than the previous one. I appreciated the introduction of a male of color. I wonder if I would volunteer for the bride program.

The premise of this book had a lot of potential. I thought we were finally going to get a feisty union. I’m over here yelling “What? You crossed galaxies to be with him and he doesn’t want you? Throw those cuffs in his face! Chip an Atlan tooth!” And also, ”leave his ass and make that beast go nuts!” Instead the main female character abandoned her back bone after three minutes. Not only did she submit over and over, but we were subjected to her devoted inner dialogue. She was worshipping her mate before he had even made amends. Also why did her learning curve always take place in front of crowds of important people? She sounded like a bimbo. I hate when private emotions are on exhibit.

This one drove me insane with how dour and continuously negative the H was. I felt bad for the h!

HAE and then some

I was not sure I was going to like this story at the beginning but I kept going and then I was hooked and so glad I did the twist and turns kept the story interesting..... yes I like the sexy parts but I want different background storyline and this filled my needs

So far my favorite

This is so far my favorite story in the series. I definitely recommend this one.