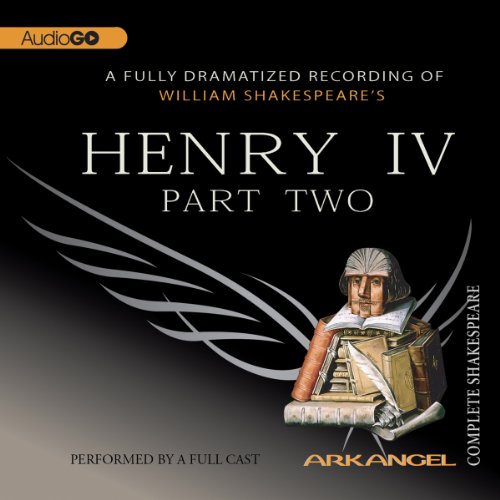 Prince Hal parts from his past to fulfill his royal destiny in this essential conclusion to Henry IV, Part 1.

Rebellion still simmers in England and King Henry's health is failing. Prince Hal has proved his courage but the king still fears that his son's pleasure-loving nature will bring the realm to ruin. Meanwhile, Falstaff and his ribald companions waste the nights in revelry, anticipating the moment when Hal will ascend the throne. Falstaff is in Gloucestershire when news arrives that the king has died. Has the dissolute old knight's hour come at last?

Hal is played by Jamie Glover and King Henry by Julian Glover. Richard Griffiths is Falstaff.

Virtue is chok'd with foul ambition

I was recently at a book signing for Don Winslow's new book The Force and he brought up his life-long fascination with Shakespeare and how the Godfather books/movies (at least the first two) are basically a retelling of Shakespeare's Henry IV with the moral poles flipped (with Al Pacino playing Hal and Diane Keaton as a gender-bent Falstaff). I can run with that.

Anyway, Henry IV, Part 2 is fantastic. It is less playful than Henry IV, Part 1 and the comic role of Falstaff drops an octave into tragicomedy. Falstaff still possesses a comedic greatness to him, but he has suddenly seen his relationship with Hal changed at the end as Hal puts away childish things and takes up the mantle (and crown) of his father. One of my favorite of Shakespeare's Histories (right there with Richard III). It is a mature and serious play. Youth's sandbox has been replaced with the battlefield and folly has been replaced with responsibility.

“Rumour is a pipe
Blown by surmises, jealousies, conjectures
And of so easy and so plain a stop
That the blunt monster with uncounted heads,
The still-discordant wavering multitude,
Can play upon it.” (Prologue, Scene 1)

"I were better to be eaten to death with a rust, than to be scoured to nothing with perpetual motion." (Act I, Scene 2)

"A good wit will make use of anything; I will turn diseases to commodity." (Act I, Scene 2)

“By my troth, I care not; a man can die but once; we owe God a death and let it go which way it will he that dies this year is quit for the next” (Act 3, Scene 2)

After you've listened to Henry IV Part One, get the other half of the story here. Although Part One can sort of stand on its own, with a great battle scene at the climax, skipping Part Two would deprive you of one of the best plays about aging ever written - and also one of the great father/son scenes of all time.

There's not so much sturm and drang in Part Two. There's another batch of rebels to bring to heel, but they're defeated by a trick, by Hal's brother John - a serious, devious young man who cares about as much for Falstaff as Falstaff does for him - which is to say, not much. (Falstaff's speech about the virtues of sack is a miniature masterpiece.) Meanwhile Falstaff is feeling the effects of age. There's a poignancy about his scenes with the prostitute Doll Tearsheet, or the country bumpkin Justice Shallow, that's unlike anything in the first play. And it leads up to one of the most painful scenes of rejection in all of Shakespeare.

Prince Hal has much to do to convince his father, the dying Henry Bolingbroke, that he's not a wastrel and good-for-nothing. He's playing a long game. When he ascends the throne, he plans to throw off all his old companions and let his true virtue show forth, arousing his subjects to wonder and admiration. In a long and moving scene, he and his father finally come to terms.

The cast of Part One continues here, with Julian and Jamie Glover as Hal 4 and Hal 5; Richard Griffiths as Falstaff; and introducing the energetic Edward de Souza as the crazy Marlowe-quoting Ancient Pistol ("What? Shall we have incision? Shall we imbrue? Then death rock me asleep, abridge my doleful days! Why then let grievous, ghastly, gaping wounds untwind the Sisters Three!").

Is Hal a cynical jerk, or is he making a painful but necessary decision to reform? Some of the scenes in this play really hurt, up close and personal. Falstaff is a bloated scoundrel, but he's also - as Pistol later says of King Henry V himself - "a lad of life, an imp of fame, of parents good, of fist most valiant. I kiss his dirty shoe, and from heart-string I love the lovely bully."

Listen to Part I first.

I was told Part II stands alone, so I listen to it the first time and was frustrated. Then I listened to Part I and afterwards Part II again and appreciated the latter much more. Specifically, Act I made more sense.

I listened to the Arkangel full cast production of the play while reading the text from the Delphi Complete Works of Shakespeare. This is the second of King Henry and the third of the plays in the group. I found it just as witty as the other plays of Shakespeare and combined with the bawdy songs and capers pulled off with some of the characters like Folstaff a totally delightful play. In this play the Prince of Wales is confronted by his father the dying King and as the crown passes the Prince finally makes the choice to take his new role seriously and cast aside his frivolous youth...and friends. The confrontation that starts the play ends on an odd note...a truce, a peace and a somewhat underhanded maneuver by the Crown, thinking of that saying “all's fair in love and war”, I would suppose this would be a good example. The final speech, an epilogue at the end of the play, seems almost an apology to the patrons that they would not be getting their money's worth.