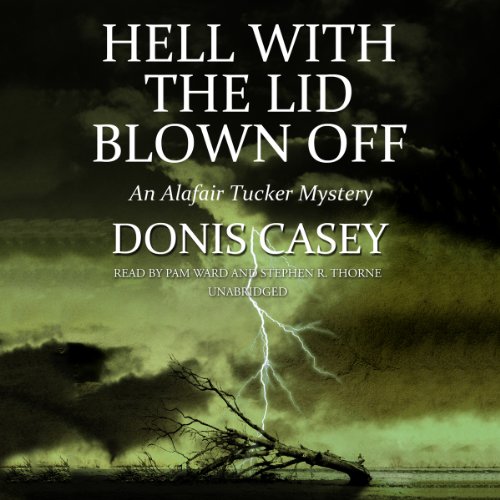 Hell with the Lid Blown Off

Some secrets can comeback from the grave.

In the summer of 1916, a big twister brings destruction tothe land around Boynton, Oklahoma. Alafair Tucker's family and neighbors are not spared the ruin and grief spread by the storm. But no one is going to mourn for Jubal Beldon, who made it his business to know the ugly secrets of everyone in town. It doesn't matter if Jubal's insinuations are true or not. In a small town like Boynton, rumor is as damaging as fact.

But as Mr. Lee, the undertaker, does his grim duty for the storm victims, he discovers that even in death Jubal isn't going to leave his neighbors in peace. He was already dead when the tornado carried his body tothe middle of a fallow field. Had he died in an accident, or had he been murdered by someone whose secret he had threatened to expose? There are dozens of people who would have been happy to do the deed, including members of Jubal's own family.

As Sheriff Scott Tucker and his deputy Trenton Calder investigate the circumstances surrounding Jubal's demise, it begins to look like the prime suspect may be someone very dear to the widow Beckie MacKenzie, the beloved music teacher and mentor of Alafair's daughter Ruth. Ruth fears that the secrets exposed by the investigation are going to cause more damage to herfriend's life than did the tornado. Alafair has her own suspicions about how Jubal Beldon came to die, and the reason may hit very close to home.

I really enjoyed this page turner and at times heart pounding mystery set in 1916 Oklahoma summer storm season. A tale of a bully, a destroying tornado, complicated family life and the power of unconditional love. The narration was perfect--the alternating voices worked really well and added depth and texture to the book.

This was a strong story of a rural community that pulled together and helped one another through hard times. To me, the best book in the series so far. I really hope there will be more to come. Wonderful!

--Plus at the end there are mini lessons on how to make homemade from scratch biscuits, fried green tomatoes, green beans and fatback, pork chops and pan dressing & creamed onions! A fun addition.

Wish there were more. This good family and the descriptions of the daily work it took to get by back then is really wonderful. The actual mystery is just gravy.