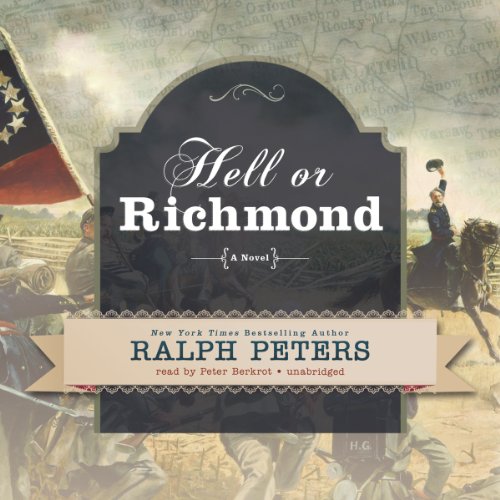 Between May 5 and June 3, 1864, the Union and Confederate armies suffered 88,000 casualties. 29,000 were killed, wounded, or captured in the first two days of combat. The savagery shocked a young, divided nation. Against this backdrop of the birth of modern warfare and the painful rebirth of the United States, Peters has created a breathtaking narrative.

In Hell or Richmond, 30 days of ceaseless carnageare seen through the eyes of a compelling cast, from the Union's Harvard-valedictorian "boy general," Francis Channing Barlow, to the brawling "dirty boots" Rebel colonel, William C. Oates. From Ulysses S. Grant and Robert E. Lee to a simple laborer destined to win the Medal of Honor, Peters brings to life an enthralling array of leaders and simple soldiers from both North and South, fleshing out history with stunning, knowledgeable realism.

From the horrific collision of armies in the Wilderness, where neither side wanted to fight, to the shocking slaughter of the grand charge at Cold Harbor, this epic novel delivers a compelling, authentic, andsuspenseful portrait of Civil War combat.

Commemorating the approaching 150th anniversary of this grim encounter between valiant Americans, Ralph Peters brings to bear the lessons of his own military career, his lifelong study of this war and the men who fought it, and his skills as a best-selling, prize-winning novelist to portray horrific battles and sublime heroism as no other author has done.

Overland campaign or the Wilderness campaign.

I must confess to my inability to completely follow every step as I have read it from history books. One huge downside was the ending. I realize there is another book to follow, but a little closure couldn't hurt. Pace felt rushed but details were intimate. Characters were real with emotional purpose. I felt more detached from these characters than from his previous novel. Still a good read.

finally a book that can allow you to imagine what

Finally a book that can allow you to imagine what it was like to be there. No movie or book or documentary has been able to capture the ferocity and determination of both sides. Plus, the terrible condition of the men involved physically and mentally.

Ralph describe three major battles of the Civil War. These battles are known as the Overland Campaign in spring of 1864. Ralph describes what it is like be in frontal attacks of both armies and the horrows of hand to hand combat.