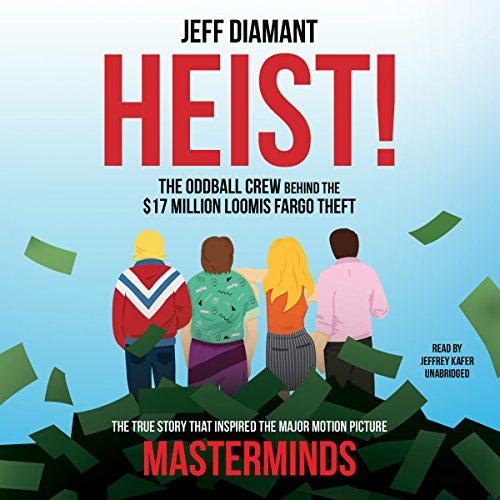 The bizarre true story of the criminals behind the second-largest bank heist in American history.

One night, in a small North Carolina town, a down-on-his-luck guard at Loomis Fargo manages to steal $17 million - literally more than one ton of cash. Despite being caught on camera wheeling the money from the vault to the getaway van, David Ghantt makes off to Mexico before the FBI can blink.

There's just one hitch: Ghantt has entrusted the money to an oddball crew of accomplices who had wooed him into committing this massive theft in the first place - and who, he soon learns, are trying to take him out. Now one of the most wanted men in America, and with the FBI hot on his heels, Ghantt must figure out how to get his money, get away from a hit man, and get even.

In this outrageously entertaining book, Jeff Diamant, the Charlotte Observer's lead reporter on the case, offers the definitive inside account of this astonishing true story that has captivated American audiences on the news.

The Gang That Couldn't Steal Straight

I grew up in Charlotte and at the time of the heist still had family in the area so I was able to follow the story by proxy when it came to light. It is the story of mentally challenged amateurs who have one incredibly lucky day and spend the rest of the time that they're free acting like; well acting like mentally challenged amateurs. It's not a bad listen despite numerous mispronunciations by the narrator and it's certainly a unique story.

A go story...I wish the F Bombs could be censored to keep it family friendly.

This was an account of the infamous Loomis heist where David Gant and associates stole 17 million dollars. While Gant waited in Mexico for 5 million that would never come, associates spent like no tomorrow and even tried to have Gant killed. It’s all here in entertaining detail. Ably narrated by Jeffrey Kafer.

Great read (listen). So goofy seems more like fiction. The writer, being a journalist, does a great job of presenting and keeping the multiple threads of the story clear. At the same time, he gives each of the players life and actually makes them sympathetic - albeit comic - characters.

I finish this book because the narration

Great true story. Completed DIY while listening..We all love a crime story involving everyday people and stacks of cash from the highs, to the stupid mistakes and the inevitable dismal culmination .
Negatives: narrator sounded bored, kept quoting timings as ‘six o’clock pm’…grrrr IT’s just ‘six pm’ !!!! The whole epilogue had really been covered already during the story, felt like filling.