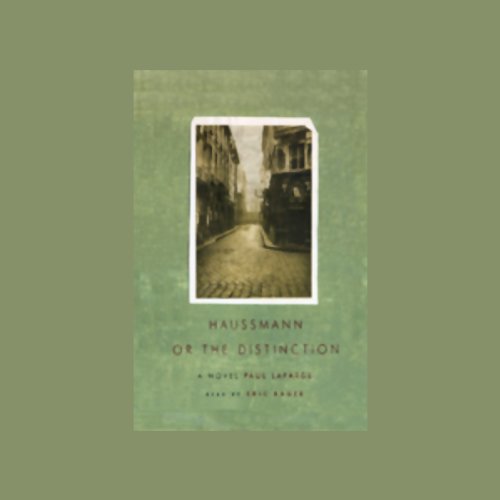 Haussmann, or the Distinction

LaFarge's stunning novel of love, betrayal, and exploitation is based on themes involving the life of the great city planner Georges-Eughne Haussmann.

Baron Georges-Eughne Haussmann was the architect of modern Paris. In two decades, from 1853 to 1869, he transformed the cramped, filthy lanes of the medieval city into the airy boulevards and green parks of today. Yet there is a story that, on his deathbed, Haussmann wished to undo everything he'd built. "Would that it had died with me!" he is supposed to have said. What is the secret of the baron's last regret?

To answer this question, author Paul LaFarge tells the story of a three-sided affair that pitted love against ambition and architecture against flesh, in this sweeping drama of a changing social order.

"LaFarge...neatly integrates geographical and cultural references into the tale, making this as much an enlightening history of Paris as it is a tragic, affecting love story. An astonishing amount of research, a believable tone, and a captivating story all come together to make this work a stunning success." (Publishers Weekly)

"Haussmann, or the Distinction" brings alive, in fabulous detail, another era, set of social codes, and behaviours. Laid over this are eternal tales of love, duty, pain and survival.

Fact or fiction or a mix of both, the characters are interesting and rounded, and a pleasure to follow.

As author Paul Lefarge says in his introduction, the questions the novel asks are as valid today as they were 100 or more years ago. "How to build new things without demolishing old ones... How to preserve the past without living in in, which are as worth asking today as they were a century ago".

Beautifully written and read.. and well worth listening to.

I'm an avid audible listener. This is the first book of about 100 audio books I have listenened to that I have ever been so negative about. It's probably because it reminds me of the dreaded high school assigned reading from my past. I would ask myself, "of all the millions of books published, why did they pick this tedious, boring, plodding one?"

Landmark historical novel of Paris, Parisians, the master himself during Haussmannization. This obscure author writes in the grand epic novel style of Balzac and Zola. And, as the postscript reveals, he worked in the Haussmann orbit of civil servants, giving us a firsthand record of the glory and grotesqueries of this era of demolition and rebuilding. Magnificent.