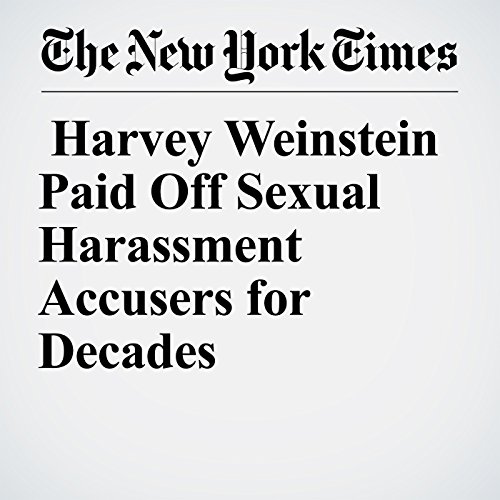 The Weinstein Co. fired its co-founder Harvey Weinstein on Sunday, after a New York Times investigation uncovered allegations that he had engaged in rampant sexual harassment, dealing a stunning blow to a producer known for shaping American film and championing liberal causes.

"Harvey Weinstein Paid Off Sexual Harassment Accusers for Decades" is from the October 08, 2017 Business section of The New York Times. It was written by Megan Twohey and narrated by Kristi Burns.

Imagine the common women just trying to keep her career?

Not everyone is harassed by a high profile man like Harvey Weinstein! Just ask "Dave S", that man is a perv 6x minimum! The previous allegations went without witnesses until me. All against the common woman trying to work hard to forward her career without accepting theose sexual harassment pleas put in front of her face over and over. How can low profile women succeed without giving in to these advancements more common than the Harvey's of this world? PLEASE interview the hundreds of thousands of us instead. You see how it changes a life of a common mother trying so hard to get her career built on honesty, integrity, hard work, dedication and long hours without giving in to theses lowlife pervs who do this to not only myself but MANY others within the common workplace? NO ATTORNEY WILL TAKE YOUR CASE AGAINST LARGE CORPRATIONS SUCH AS A COMPANY LIKE LET'S SAY EDISON FOR GRINS ANS GIGGLES!??! Especially if you make under $25 an hour! You don't stand a chance in current times. Why is this not written about more?