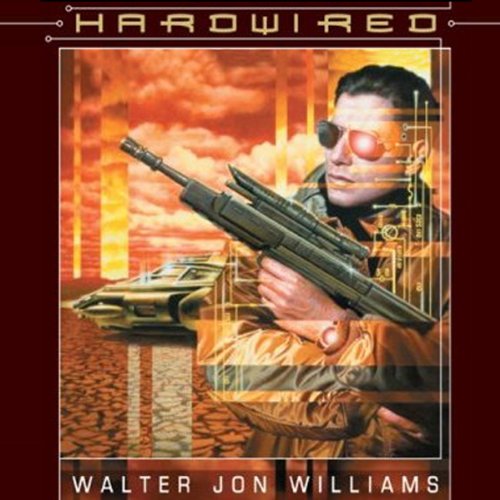 Ex-fighter pilot Cowboy, "hardwired" via skull sockets directly to his lethal electronic hardware, teams up with Sarah, an equally cyborized gun-for-hire, to make a last stab at independence from the rapacious Orbitals.
©2006 Night Shade Books (P)2008 Blackstone Audio, Inc.
"Hardwired is a tough, sleek juggernaut of a story, punctuated by strobe light movements, coursing to the wail of jets and the twang of steel guitars." (Roger Zelazny)

The Best Cyberpunk I Have Read

I generally don't like cyberpunk. Gibson's Neuromancer left me cold. But Williams, in my opinion, is a better and more versatile writer. I listened to this book because he wrote it.

I was not disappointed. The cyberpunk aspects of the story serve to enhance the characterization and the setting and do not dominate.

The conflict with the orbitals is resolved in a way that flows naturally from the story and does not feel forced. A poor resolution could have wrecked my view of the book no matter how good the rest of the story.

Finally, Stefan Rudnicki does an excellent job of making the various characters distinct. I have not read the print version, buit I suspect the audio version is a better experience because of Runicki's narration.

Very good narrator, story is from 2 points of view and takes a little bit to get used to but works great. I have listened to this book twice already.

I’m a former US Air Force SSgt and a retired Policeman. I really enjoyed the way Mr Williams described the human condition during conflict. I’ve been in several fights where my life was at stake. I’ve even been shot at point blank range, and I feel that Mr Williams captured this mindset.

It’s also interesting to see how this 1980’s fiction captures so many of the things seen now.

I'm a big fan of Richard K. Morgan's Takeshi Kovacs stories and this is an obvious precursor. The story is a little complex, but nowhere near as hard to follow as any of Morgan's. Williams writes well and avoids sentimentality. I especially enjoyed the character whose brain is absorbed into cyberspace.

A well told story set in a depressing future

A hard boiled, cyberpunk styled tale of two very different people just getting by, in a very depressing, but scary believable and essentially balkanized, former United States. The world is now run by various corporations that don't even reside on the planet. They hover above it and manipulate life below without being part of it. There are social classes built around them and a whole slew of other things that the author builds in his vision of earth's future.

Through a series of events in the story, the two main character's, Cowboy, an ex-fighter pilot turned bootlegger and Sarah, a sometimes body guard, thug and killer for hire, find that their lives have become intertwined. The pace of the story became a little slow for me in the middle, but on the whole, this was an excellent story and I think worth your credit. If you are a fan of the cyberpunk genre and or Richard K. Morgan, Neal Stephenson, William Gibson and their like, then Hardwired should be an satisfying choice for you.

Also, veteran narrator, Stefan Rudnicki was definitely on top of his game reading this one. He has, for me, the kind of voice that can sometimes distract me from the story that I'm trying to listen to. Other times, I find that he throttles back his voice a little too much and in some cases, sounds a bit monotoned and unexciting, In Hardwired. I think he chose just the right balance.

Nauseating Narration. Tried for 90min. Has to stop

The story dives in hard, feeble explaination of the world. I had to stop after 90 painful minutes of gut cramping narration. Its almost like someone trying to do an impression of a radio announcer talking through a block of cheese while doing an impression of an audio book narrator. Its just flatly terrible narration in an artificial voice.

Surprised it took so long to find

I love this book. it is simple and straight forward with no interweaving thousand character narration. From it though comes so much of what makes modern sci-fi/cyberpunk. story is great narration perfect. Easily a top sci-fi book.

I can see why this inspired the CyberPunk RPG.

With the recent fanfare on the CyberPunk 2077 game coming in 2020 and Mike Pondsmith mentioning this book being a major inspiration for the original CyberPunk RPG, I had no choice but to check this book out.

The book does not disappoint. The author's vision is way ahead of it's time.

The narrators voice is very cool; however, it is very deep all the time and makes it hard not to be distracted by other things when listening.

Walter John Williams is one of the greatest syfy authors of all time. when he came up with this Cyberpunk world most of the tech was imaginary. Now a lot of it is here, or nearly so. Also, the politics and multinational corporate machinations are very close to what is occurring in the world now.

This is a book I read about 10 years ago. Lots of fun. Action packed.

This is one of my favourite audiobooks. It is the first I have listened to a second time. The reading perfectly compliments the writing style. Yes the story has plot holes and it stretches credibility a bit, but the pace, energy and drive of the narration are breathtaking.
It creates a future world but does not get bogged down in detail for details sake, which sometimes happens with SF authors...If you are reading a book and you hit a paragraph waxing lyrical over some technical gizmo you have a choice of reading it and revelling in the detail, or letting your eye skip to the start of the next paragraph. You cannot do that so easily with an audio book.
Perhaps an analogy would help. If this audiobook was a picture of an fighter plane going into action it would be 'Whaam' by Roy Lichtenstein - graphic and immediate with just enough detail to carry you into the action, rather than say a Robert Taylor painting - accurate down to individual rivets! Don't get me wrong, I love to look at a Robert Taylor print, but having someone describe it to you ... well you get the picture!

This is probaly the best audiobook I've ever heard. It's like it was written specifically as an audiobook, the narrative, the imagery, the flow of the language are all great. I wish I could un-hear it and experience it again.

Story, context and characters are high quality and make sense, in the terms this kind of story can make sense. For me, a clear five star up there with my all-time favorites Altered Carbon, Old Man's War and the Mars trilogy.

Cyberpunk meets the a wild west

loved it, I read the book 30 years ago, and it's as exciting now as it was then. Add to that, a narration that seems at first a stereotype, then grows on you, and in the end seems perfect.

Fun but not original

Enjoyable and fun. Not original. Plot was OK. Voice acting was excellent. Kept me entertained.