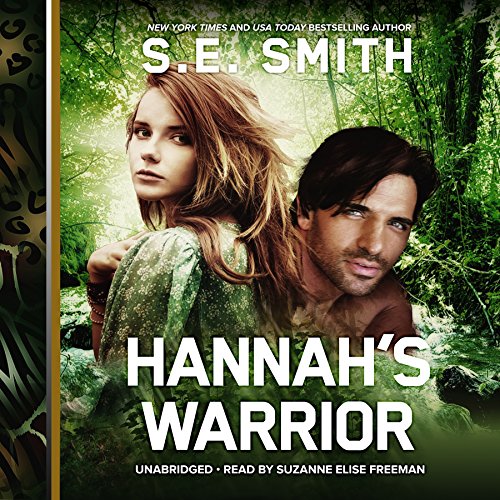 Hannah Bell, the oldest of the three Bell sisters, spends most of her time in the remotest parts of the world photographing endangered animals. She is also gifted with an extraordinary sixth sense, which has saved her life on more than one occasion. When she senses something has happened to her littlest sister, Tink, she will do whatever it takes to protect her. What she doesn't know is her sister's best friend's new science experiment has opened a portal to another world - a world she is about to be taken to whether she wants to go or not.

Borj 'Tag Krell Manok is the calmest of his four brothers, or so he always thought. The second oldest, he has been assigned the task by his father and the council to bring the sister of his brother's bond mate to their world. Borj knows deep down that Hannah is destined to be his bond mate - something he has hoped for since his first mating-rite ceremony. What he doesn't expect when he meets her is her resistance - or her independence.

When she is kidnapped by a rival clan, Borj will do anything to get her back. Hannah and Borj's escape into the vast forests of Prime draw them together in a fight not only for their lives but for a deeper understanding and trust between two vastly different worlds. Borj discovers Hannah is a fierce and cunning mate while Hannah discovers Borj is the perfect warrior to protect and love her.

I don’t really have a lot to say about this one, I liked it but I didn’t love it and I just found Hannah to be an ok character nothing about her jumped out at me and connected me to the story and that’s totally ok.

I liked Borj and I am glad he found his mate.

Just because I didn’t connect well with this book doesn’t mean I didn’t like it or that I won’t keep going with the series I will.

I enjoyed the narration; I again believe she brought out the voice of the characters in a unique way.

When I'm in the mood for a sextraterrestrial listen I turn to S.E. Smith because over and over again she has captured my imagination with her various loveable Alpha Aliens. And, especially in this series, she fills the listen with interesting characters for you to care about so, when you finish the book, you can't wait until the next one comes out so you can, once again, dip into this alternate Universe.... where women are worshiped by gorgeous Prime Warriors.

This book continues where Tink and J'kar's story left off and now Tink wants her Mom close by so J'kar's brother Borj is only too happy to take on the mission and bring Tink's Mom to her.... but he also has a mission of his own. Since seeing a picture of Tink and her two Sisters he has been obsessed with one of them - Hannah and he's sure she's his bonded mate. But unfortunately he doesn't quite pick the best time to get acquainted.... and he's not prepared for the painful welcome he gets when he creeps in on the feisty Hannah unannounced and in the middle of the night. Hannah had a very traumatic experience in her teens and now prefers a fairly solitary existence photographing wildlife in dangerous and deadly environments. And, after her trauma, she's made sure she can look after herself by taking self defence lessons which happily come in very handy when a huge intruder thinks he can calmly break into Cosmos's home.

This results in some fun chapters and, although Borj doesn't get the welcome he was expecting,..... he does get the positive answer he was hoping for - the beautiful Hannah is his mate - but unfortunately she'll need a lot of convincing on that issue. Thankfully Borj gets help from an unlikely source..... her loving parents who are fun, sexually very open minded and are all too willing for this tender but strong and protective Prime Warrior to claim their daughter. They're also very keen to go and visit Tink on Baade which makes for witty banter, sly sexual innuendos and some fun visualizations because these two become well loved sexual Gurus to any Prime citizen with questions.

Hannah and Borj's romance flows along imperfectly perfect with touching tender scenes as well as passionate steamy scenes too. There's drama and angst because, despite Borj's heartfelt promises to protect his Hannah, she is kidnapped not once but twice.... once by good men with good intentions and once by very very bad men with nothing but bad intentions - which make for some tension filled scenes . Dual, and occasionally multiple, POV's and this fantastic fantasy world, along with it's many inhabitants, are all wonderfully brought to life by a very good narrator. And it leaves you eagerly anticipating your next visit with them.

Worth a credit? This listen was very enjoyable, was really entertaining, was a hoot, was much more than I'd hoped for and, in my little world, was, and is, definitely creditworthy. IMO, this would best be listened to after book 1 which has the initial introductions to all the characters, explains the Gateway, tells the backstory to their race, outlines their dilemmas and shows what a super-caring race these Prime Aliens are.

This series gets better and better. I love that the women in this stories are head strong,independent. And know how to kick some Warriors ass. This story is filled with witty banter, humor and just the right amount of hot steaming sex. The narrator did an excellent job. I can't wait for book 3. If you like alien fantasy romance down load this series. S E Smith is an amazing writer and she deliverers great storylines. So worth a credit

I have found that I do indeed like the narrator. I have listened to the first two audio books several times and I don't think you can do that if you really dislike the narrator. No, I am enjoying my audio books alot. Thanks Suzanne, I appreciate your hard work.
Oh yea, thanks to the author too!😌

When will we hear from Gracie?

I gotta say. This book is great. some parts messy but keeps you hooked. Real life issues but great love.

Amazing book I hope there is more

I really like this book ,some parts I did not expect from a S.E. Smith novel, but this was very good.


They are smart women I like this new era of romance novels in which women are strong!!!

Wow so much action in this storyline. Hannah has so many run in’s with the bad guys. In her ad she meete her mate and then gets kidnapped but no worries she escapes only to be kidnapped again. This was a great and interesting storyline. I enjoyed the characters so much. The narration was great and am starting book three.

Book two was just as amazing as the first. Once again, a woman that takes no prisoners when it comes to her safety! We also revisit Tink and her progress. Its pretty cool to see the progression without it being repetitive. I’ve read series where I felt like they were retelling the first book again – that’s not the case here.

The storyline is intoxicating, to the point I don’t want to stop listening! The details are impeccable and allows the reader to picture everything!

I really like how the narrators voice was very soothing to listen to .
Usually you read reviews about a good story but terrible narration that one can understand how difficult it can be to appreciate a good story ....
I am reading the entire series . Really enjoyable.

Brilliant continuation in the story

I started with Tink's story and I loved how different Hannah was from her sister. A common problem I find in books is that although the author tries to write different personalities they all seem to blend into one. I loved that they were different and had a darker past to overcome. The narration was excellent, the only slight problem personally was I sometimes got names mixed up but that can happen when there are a few characters with similar names. I never confused the MC's so the story was never in trouble just some of the background characters.

Nice bit of escapism better than the first book

This is a better book than the first, though I would recommend book 1 before this as this book follows on immediately from the (unsatisfactory) end of book 1.

The characters are better and the plot has much more to it. The balance of plot to sex scenes is about right.
Fairly predictable mix of lovers falling out, peril for the heroine and some quite funny scenes and some raunchy bedroom action. The book pans out pretty much as you would expect.
I really liked the character of Hannah. I also thought Borj was a better defined person than J'kar in the first book
I still dont like the narrator I don't think the male voices are good at all but the female voices are OK.
I enjoyed the book and will definitely be downloading the next one

Even better than reading the book.

I loved all S.E. Smith's books but in audio format they are even better. I couldn't recommend this author more. She's one of my favourites and in audio format you get a real feel for the emotions of the characters.