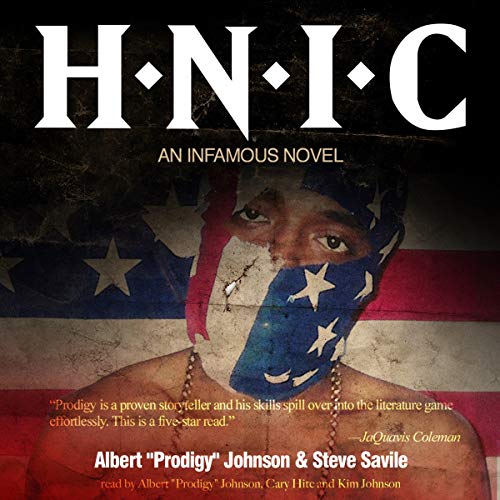 Pappy tries to break out of the game before the head of his crew, Black, gets them all killed. Against his better judgment Pappy agrees to do one last job, but only because it’s the price of his freedom. He knows Black can’t be trusted. He knows his “brother” would rather see him dead than let him walk away. Yet he still agrees to do the job because Black isn’t the only one who can’t be trusted. Sometimes you have to kill for what you want.

Further developing the stark realism and uncompromising streetwise narratives of his lyrics, H.N.I.C. cements Prodigy’s position as one of the foremost chroniclers of contemporary urban life. Simultaneously a fast-paced crime drama and an engrossing, unsentimental moral tale, it peers into the dark heart that underpins the codes of loyalty and friendship, betrayal and vengeance.

I just wished Prodigy lived longer, so he could have written more!! Excellent from start to finish.

I enjoyed the characters and the twist in the story. Characters that start as friends, and things change quick.

I’m
So
Proud
Of
prodigy
He could gone far in audibles , his voice being you into the character, this story line happens s everyday and have a great moral to it that is loyalty is a must .

Wow from the first chapter I was hooked lol and the narrator was on point the story ran smooth with action and intensity. it was like watching a movie. I loved this so much I had to listen to it a second time. I'm glad I bought this book so I can listen to it as many times as I want to lol.

sound effcts get annoying they say gun sounds was muffled but have gun sound effects,

i got it thinking it was the autobiography of prodigy. but its not bad pretty good had me hanging on every word

Damn... still in shock.. A must read book. Sad how people you call friends can turn on you in a blink of a eye