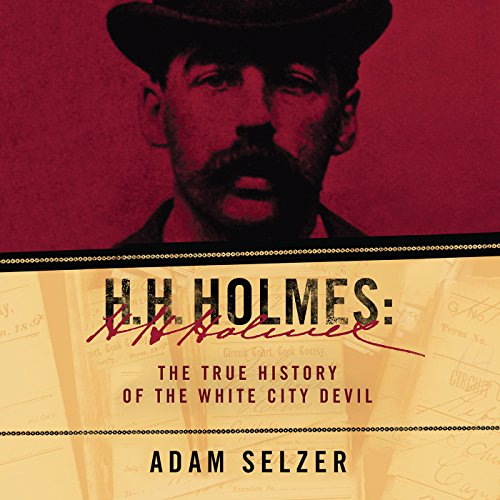 This is the first truly comprehensive book examining the life and career of the murderer who has become one of America's great supervillains. It reveals not only the true story but how the legend evolved, taking advantage of hundreds of primary sources that have never been examined before, including legal documents, letters, articles, and records that have been buried in archives for more than a century. Although Holmes is just as famous now as he was in 1895, this deep analysis of contemporary materials makes clear how much of the previously known story came from reporters who were nowhere near the action, a dangerously unqualified new police chief, and lies invented by Holmes himself.

I've read several of the books on Holmes and watched American Ripper. It's just my personality to test everything and I kept thinking, "Where's the evidence?" Although I do enjoy the sensationalized story for fictional and entertainment purposes, I appreciate Mr Selzer's mind frame (like mine) to test the story against the evidence to make a clear line between fact and fiction.

...Equally disappointed. All over the place, no consistent storyline and not 1st or 3rd person... just a documentary narrative. An1 hour after-school special would have been more entertaining!

As comprehensive as possible, given the lies and constant obfuscation of the subject, and the completely insane levels of myth-making that have gone on for over a century. However, would it be out of place to ask... I don't know, maybe it's expecting too much..... But maybe, if you're hiring someone to read an audiobook, um... maybe make sure they can actually read?

The book overall was so incredibly well written and researched. Adam did not sensationalize or exaggerate Holmes or his crimes, nor feel inclined to add to allure but based the writing on what could be backed up by evidence. I did not feel as if the book where truly leaning or inclined one way or the other throughout, but was a thorough summation of what could be backed up. Narration was also superb. Loved this book!

the narrator reads in a lifeless monotone voice and the author is all over the place. bummer of a book.

A new take on Holmes

This is a very in depth look at Holmes and his alleged crimes and victims.

I could not get through this. The narration is boring and without emotion. The author appears to be more of a Holmes apologist (he was not THAT of a guy, only killed a few) and I simply could not finish it. I live outside of Chicago and I am well familiar with the case. This book just didn’t make the grade as books about Holmes go. This is the only book I have returned because it was mind numbing in both writing and narration. A lethal combination.

Adam Selzer must have invested hundreds of hours into compiling all this data. He didn’t just collect old news articles—he somehow got access to original trial transcripts, often handwritten stenographer notes published here for the first time. Maybe his next book should be about how to find stuff like that! The reader’s performance is perfect for me: unobtrusive, and steady enough so that I can listen attentively or fall asleep listening depending on my mood. The audio production is overall good but there’s a slight occasional sibilance (sounds like the reader has a lisp, but he doesn’t). I got used to it but it was a little annoying at first. Check the sample for yourself.

I always finish what I start with books and movies, but I just couldn't with this one. I read reviews that said it is a lot of dry facts and not captivating which I didn't think would be a problem for me. I have listened to a dozen books on Henry VIII, his children, and his wives which could be considered very dull by some with the endless dates and periphery characters. Basically, I don't bore easily. This book truly tested me. I made it through to only seven hours remaining and gave up. The first bit of the book is far more interesting than what I read of the last two thirds. The narration was great, no complaints there. To the book's credit, it is very thorough with fact checking and doesn't give into sensationalism. It was just.. boring. This is the first book I have returned for a refund and I don't feel like I have missed out on anything at all by not finishing.

The book listens/reads like a textbook. It has the truth but is not for entertainment.

Comprehensive examination of the life and career of America's first serial killer, using contemporary letters, documents, court records and newspaper articles. The book traces the infamous Holmes through several marriages, medical experiments and early attempts at insurance fraud, to the many individuals he may and may not have murdered. Adam Selzer leaves no corpse unturned in this fascinating account of evil doctor HH Holmes. The details are at times gory, and include particulars of the deaths of several children, which some listeners may find upsetting. The author also has a tendency to repeat himself a little, though as the text runs to a smidgen under five hundred pages, it was useful to be reminded of earlier events and misdemeanours as the story came to its conclusion. Selzer paints a thought-provoking portrait of Holmes, showing the many and varied versions of himself played out by the killer over the span of a relatively short life. While he was plainly a crafty individual, Holmes does not fit the usual criteria of serial killer and may have simply knocked off people who got in the way of his plans, rather than killing from a psychological or sadistic motivation. Nevertheless, some of his victims – such as the slaughter of several members of the Pitezel family – demonstrate a distinct lack of feeling for his fellow human beings. A fascinating and well-researched book that will no-doubt sell in shed-loads when the forthcoming Martin Scorsese/Leo DiCaprio movie (The Devil in the White City) is released.

I've read about Holmes and his murder castle in the past and have watched quite a few documentaries about him too, the latest being The American Ripper in London, they all smacked of sensationalism with incredible hype that I wondered how on earth people believed any of it. This book was like a breath of fresh air, kept to the facts, which in themselves are bad enough, but also dismissed the absurd that was recreated in the tabloids at the time and which are still being repeated today. The author gave a good account of just about everyone that was involved so much so that I could picture them and even have an understanding of what they were about. There's no denying that Holmes was a scoundrel and more than likely a serial killer and this book lays out the facts to support all this but it also describes clearly the hysteria that became attached to Holmes and his resulting execution... (I'm surprised he wasn't burned at the stake to be honest). This book gave me the two subjects that interest me the most, history and crime, the descriptions of the time and places really made me feel I was there and the in-depth knowledge of how the tabloids and the court system operated at the time provided me with a better understanding of how Holmes became so infamous. The reader provided a voice that was easy to listen to.

Easy listen. Good level of detail. If you enjoyed 'The Devil in the White City' by Erik Larson then you may well enjoy this. Would recommend.

this book basically takes the mystery of this famous house and spends the entire time explaining how it was completely wrong. He was far more boring than originally thought.