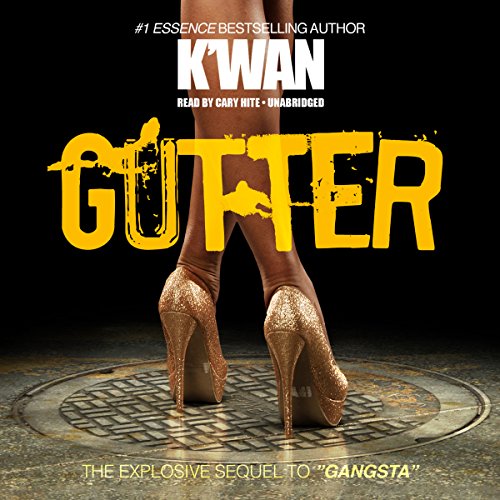 The explosive sequel to Gangsta has finally arrived!

Blood answers for blood on the streets of Harlem. It's been months since Lou-loc was brutally murdered on his way to freedom, and the pain is still fresh. Gutter, Lou-loc's best friend, finds himself on a path to self-destruction, vowing to eradicate the entire Blood faction in New York City in the name of his fallen comrade. Sharell urges him to abandon the suicide mission, but his oath won't allow it, not even for the child they are expecting. But as Gutter slips further into madness, a shocking revelation brings Satin out. In the middle of all this is a man named Major Blood. He has been flown in from Cali with two very simple instructions: shut down Harlem Crip and execute El Diablo's murderer. Walk back into the mouth of madness in this not-to-be-missed sequel to Gangsta.

this book was so good. I really wanted Gutter to live but I already knew he was going to die. And I was sad when C-Style and Hollywood died. smh at least they weren't traders like Pop-top punk self was. he wasn't even a real G. tbh he was a pμμГ I knew he was up to no good. I was like something about him . like how you gone side with the enemy. I was so glad his ugly self died. at least the others died for the set except Pop-top.


I was weak listening to this book on audible. because when Lol Gun killed Major BLOOD ! he said this is for my daddy biotch lmao.


Good book I have this book both on audible and paperback. but since I'm in college I could barely read the book so glad I tried out audible and have it a try. I use to hate audio books .

This book was well read by Cary Hite. I was on emotional roller coaster. Well done K'wan!!!👍🏾👍🏾👍🏾

Gangsta and Gutter we’re both heartbreaking stories. It was sad their were raised with fathers. Lou Loc and Gutter were both honorable men in their own owns but tortured souls.

Gutter on his gutter s##t!!

Gutter was explosive. I honestly didn't care for him in gangsta but he proved himself in this one. I liked monifa and his aunt, rah, Danny boy and snake eyes plus Hollywood really surprised me in the end..its a long read with the best main character death in the end. True crip story

Sometimes your life ends up there!

K'wan! What can I say? As usual you never fail to entertain! In the world of gangs, retaliation and death. The author introduces us to two characters raised in the streets to become legends in their own time. But sometimes your decision leads to a black suits and dreams deferred! Is there redemption at the end of the black cloud surrounding these 2 big baller, shot callers? Or will their lives end up in the Gutter!

tied In to the Don B series and all them characters this book is amazing! I hope there is just 1 more in this story. it was so good I forgot it was a girl telling a story and it ended and I remembered that I almost cried at the ending

live by gun..die by gun

it shows you..how you live is how you will die and every dog will get his or hers

This has always been one of my favorite novels! Gutter was a story worthy of being told.

I was very intrigued by this story, I couldn't wait to find out what happened to Gutter. Even though the ending was a bit predictable, I still liked the route it took to get there.

if you like gangsta shit. I'm talking 90's LA and New York Crips and Bloods then this is for you. Really well written and captivating.

I enjoyed K’wan book but this one was a bit long winded. I had to fast forward.