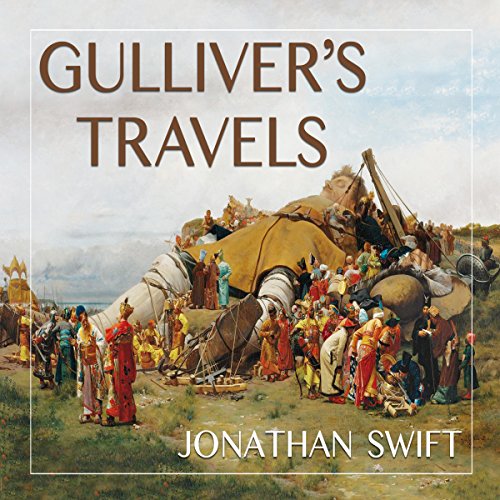 Shipwrecked and cast adrift, Lemuel Gulliver wakes to find himself on Lilliput, an island inhabited by little people whose height makes their quarrels over fashion and fame seem ridiculous. His subsequent encounters with the crude giants of Brobdingnag, the philosophical Houyhnhnms, and the brutish Yahoos give him further insight into human behavior.

Presented through Swift's satiric hall of distorting mirrors, mankind is cast as diminished, magnified, and bestial - the composite of which is an uncompromising reflection of human nature.

Great for all ages and intellects

Great for all ages and levels of philosophical and political savvy. It's very thought-provoking, and yet a fun story.

Maybe I read this classic as part of a school requirement but didn't remember it. I'm glad that I listened to this book now, though. After struggling through the intro written in early 18th century-style English, and realizing the author's technique of stating what the reader will eventually learn, the story took off. For example, there were terms in the intro that I looked up because I thought maybe I should know what they meant, only to realize that these were imaginary names for places and creatures not yet introduced.

The descriptions of Gulliver's travels were very engaging. Aside from the writing style being understandably dated, and thus long-winded, the listener gets a vivid picture of each encounter with very relatable anecdotes. The listening went quickly, I think more than reading would be because the narrator, who is VERY good, used inflection and pace to get the meaning across where a modern American may struggle with outdated phraseology.

The story is engaging as an adventure story even without understanding the political satire. I was surprised how the 4 parts of the book could stand alone, though, obviously, shouldn't.

There is plenty written about the meaning of Gulliver's travels and it is worth checking out to fully appreciate some of the finer points and to better understand the political culture of the day. It does speak, also, to modern politics and the ideas can be applied to even American politics.

For those philosophers, theologians and thinkers alike, Swift deals with questions regarding the human condition in the most creative ways. So don't be a Yahoo, read and become enlightened for this kind of literature is hard to find and who knows? It could change your life - only for the better.

The story is a classic, and I really enjoyed listening to the complete text. What a wonderful, classic satire of European culture and norms. It does get a little drawn out in the latter half—Swift tends to belabor the point a bit, as if he doesn’t trust the reader to understand subtlety in the point he’s trying to make—but if you can ignore that occasional frustration it does remain interesting.

The narration on this particular audiobook is fantastic, he does a great job keeping the reader engaged and entertained.