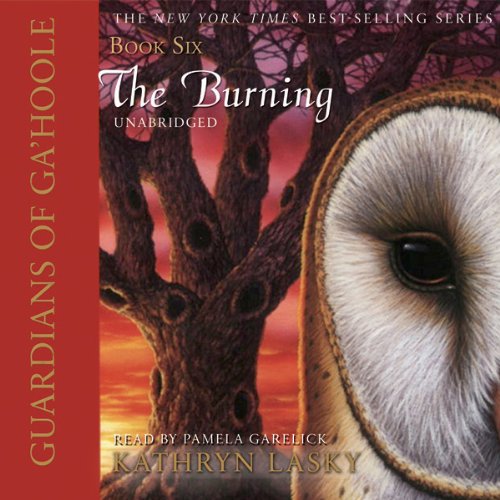 Soren and his band are sent to the mysterious Northern Kingdoms to gather allies and learn the art of war in preparation for the coming cataclysmic battle against the sinister Pure Ones. Meanwhile, in the Southern Kingdoms, St. Aggie's has fallen to the Pure Ones, and they are using its resources to plan a final invasion of the Great Ga'Hoole Tree. With the future of all Owldom in the balance, the parliament of Ga'Hoole must decide whether or not to join forces with the brutal Skench and Spoorn and the scattered remnants of St. Aggie's who remain faithful to them. The coming conflagration will demand wisdom, bravery, and sacrifice from all the owls of the great tree and, from Soren and the band, nothing less than heroism.
©2004 Kathryn Lasky (P)2008 Blackstone Audio, Inc.

This was the BEST book I have ever read or received. This made my day.

these are amazing books

I love this book... i love the whole 15 book series I have read it once in book form now listened to it in audio book form.. it amazing the most memorable part in this book of the series is when eglantine is trapped in the fire holding her evil brother's wife's egg. evil wife is after eglantine and she drops the egg. loved the narrator they did an amazing job.....

This is a great book.I loved all the action and the characters!This should definitely be an award winner.

Listen to this audio book!!!!

You should listen to this audio book. It is really cool, just one problem why is it SO DANG SHORT!

The Guardian Series is Excellent!

My eight-year old and I listened to the first eight Guardians of Ga'Hoole books and enjoyed them all immensely. Being a bird lover, these tales are especially fun and for weeks on end, our world became the world of the Guardians. Pamela Garelick's narration is very good; only her voice for Gyflie was a bit annoying (the voice was very high) though I got used to it. Unfortunately, the next seven books have not yet been recorded so we're reading them ourselves!