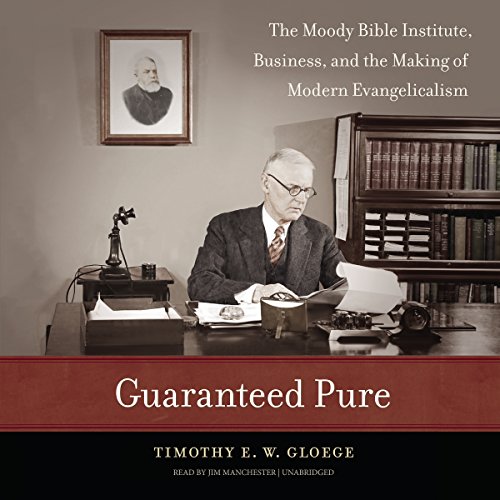 In the history of the Moody Bible Institute, founded in 1886 by shoe salesman turned revivalist Dwight Lyman Moody, Timothy Gloege finds an answer to why Christian ethics seem to go hand in hand with free-market capitalism. Taking the story back to the origins of modern fundamentalism as it arose within the social and cultural context of the Gilded Age and the Progressive Era, Gloege reveals longstanding connections between Chicago evangelicals and business and shows that the marriage between modern business and the so-called "old-time religion" developed symbiotically, forever altering the American religious landscape.

By 1920 a shifting coalition of businessmen, midlevel bureaucrats, and ministers had forged a remarkably resilient form of conservative evangelicalism that deviated in key respects from traditional Protestantism and that embraced modern consumer-oriented ideas and strategies. At the bottom was evangelicalism's thoroughgoing individualism, demonstrated prominently in the privilege it gave to a personal relationship with God as the essence of an authentic faith. This individualism aligned with key developments within capitalism and facilitated a remarkable confluence of business and religious ideas resistant to the influence of Darwinian science's basic orientation toward aggregated populations conditioned by nature or nurture.

For these evangelicals, to challenge capitalism was to challenge the foundations of evangelical orthodoxy. Guaranteed pure from both liberal theology and populist literalism, this was a new form of old-time religion not simply compatible with modern consumer capitalism but uniquely dependent on it.

Through the lens of Moody and his bible institute the author describes the growth of the 'evangelical and the 'fundamental' movement from the post civil war period to about 1925. The Institute consciously used modern business practices in selling its products to individuals and the book will give an extensive metaphor on how Quaker Oats used the same methods in selling their product to its consumers. (The founder of Quaker Oats also happens to be one of the key players within the MBI).

It's clear from the book how modern evangelicalism does owe its foundations to Moody and his methods. The book will also talk about how the original evangelicals associated with Moody wanted to bring all individuals together as socially independent consumers of religion but under a general umbrella while using a 'personal relationship to god' and a 'plain reading of the bible' in order to form a non-sectarian set of beliefs. I have no idea what those terms mean but the practitioners seemed to have understood. From time to time, I hear politicians speak like that, but it just goes right past me. I don't know what it means to have a personal relationship with an imaginary friend and somebody if he does not talk back to you. The "plain reading of the bible" doesn't make sense to me either. I wish the author had explained what that meant. Also, the evangelical movement seemed to have morphed into something called dispensationalism. Apparently it means something about there are different biblical ages that must be considered before one can properly understand the plain reading of the bible. Also, the final morphing into fundamentalism involves a premillennialism belief of some kind, the imminent return of a King of some kind to rule over the earth.

Overall, the book is an interesting read and by looking through the narrow focus of one person and institution to explain a modern day phenomena for which I often have no understanding of whatsoever is an effective approach. I still don't understand republican political presidential candidates when they talk about their 'personal relationships' with some one named God (or Jesus) but that 'person' doesn't talk to them in any conventional sense whatsoever, but now I know that they talk like that because of the modern business methods which the Moody Institute employed over 100 years ago.

Did you watch The Family on Netflix? This is the what happened before that and shows how Americans didn’t end up with more balanced views on social welfare. Wow this book is eye opening even or especially if you were raised fundamental like I was-and yet, did not hear the crazy coming from your local pulpit.

Very much enjoyed this read, among many other things it gave me a grip on understanding how dispensationalism became so dominant in North America. I found it also interesting how the doctrine and experience of the Holy Spirit took such a shift. Great history, well worth the read.