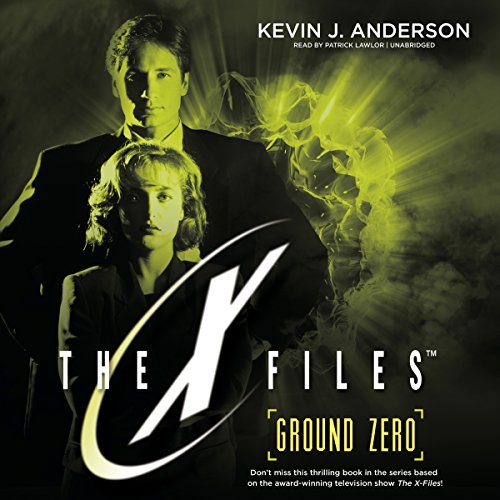 Don't miss this thrilling audiobook in the series based on the award-winning television show The X-Files!

Dr. Gregory, a renowned nuclear weapons researcher, is not only dead - he's been charred to a radioactive cinder.

Since this is a death on federal property, FBI agents Mulder and Scully are hastily called in. As agents who specialize in unexplained phenomena, they are the investigators of the X-Files, strange and inexplicable cases - mysteries the FBI doesn't want solved.

When a second victim, completely unrelated to nuclear science or to Gregory, is obliterated in the New Mexico desert and then a third dies the same way in Washington, DC, Mulder and Scully begin to focus on the frightening dimensions of their task. The bizarre deaths cannot be a coincidence. And as they work to uncover the secret element that unites these deaths, it becomes clear that this twisted puzzle has fatal consequences for the entire world.

I couldn’t finish listening to this audio book because of the awful narration! Sounds like he has nasal blockage and is reading a children’s story book!

Like most X-Files fans I can't get enough of Mulder & Scully. This was a great story and a pretty good performance.

The X-Files were serious and dark, this one is written and narrated like the 60’s Hardy Boys or Nancy Drew stories. It is overly cute and uses one simile after another. To me, these take all of the tenseness and pace away from the story, and leaves the two main characters undefined as investigative superhero’s.

This book is another well written X-Files story in the vein of Chris Carter’s TV series and movies.

However the authors research on the story revolving around the Navy and the use of some of his terms was poor at best. The story loses it for me when there are great misrepresentations/miss use of terms relating to in this story the US Navy or the US military or any military in a story.

Overlooking these issues the story is very good could have been great.

Love the narrator and story

The story was amazing and I felt like it was perfectly matched with the tv series. The visuals created were perfect

This story covered everything you come to expect from this show. Ghosts, government cover-ups and eerie crimes. The odd nature of the individual deaths can’t be easily explained like the event at the end but it wouldn’t be an X-File story of it was. Recommend

Love the X-Files. Hated this.

Story was okay, but the writing was stilted. Narrator was awful. I won't buy another.

Summary:
Dr. Gregory dies a gruesome death in his own lab. A second victim dies similarly on the other side of the country out in the middle of nowhere. A third victim gets struck in Washington, D.C. This one has some ties to nuclear research.

Additional Comments:
- Definitely of the paranormal flavor. A wee bit of government conspiracies thrown in.
- Revenge is best served stone cold, I guess.
- Mulder and Scully poke around, but they’re not even sure what kinds of questions to ask. They keep getting stonewalled by government officials. Not even their FBI clearances will pull back the curtain and shed light on the super-secret project.
- I don’t really like the researcher who turned protestor, but I do sort of like her fate. It’s oddly fitting but horrific at the same time.
- I liked the little bits of Scully’s past being tied in.
- Gee, you probably don’t want to be the person who opens one of these books because you’re gonna die in a gruesome manner.
- Patrick Lawlor’s performance works swell. He doesn’t attempt to go full falsetto for women, but you can still tell when the speaker is a lady.
- Mulder and Scully take on a hurricane. Nice. I enjoyed the conversation Mulder has with the kid who answers the phone number he’s not supposed to have.

Conclusion:
No need to hear these in order. There is zero link between the stories, but they’re all uniquely fun in their own twisted little way.

could have been shorter

i liked the story inn general, but i feel that it could have easily been shorter. they at times give too many details that don't really matter. i think that if you're a fan of the x files you should know most of the trivial things they tell you about both Mulder and Scully. some of the other things and situations they discrive could have been less elaborate as well. for the rest, the story was enjoyable and i feel like the narrator did a better job this time round of portraying the different characters. on to book 4!

If you are an X-Files fanatic like myself then you will enjoy this audio book immensely !!!!!
As ALWAYS I do NOT do spoilers or plot twists and try not to give to much of a books storyline away in reviews !!!
This is a true classic X-Files story though, dead scientists, strange occurrences, mysterious questions needing answers, & secret government tests,.....
All needing answers that can only be investigated by the amazing duo, that is FBI's Agents Fox Mulder & Dana Scully !!!!
Need too find out more,.........
Then I guess you will have to listen to the X-Files - Ground Zero audio book yourselves !!!!!
If you are a fan of The X-FILES, then regardless of the story (*although this is an EPICALY classic one !!!) Then this book is a MUST HAVE listen !!!!

X as in just plain wrong !

I Luve the X files but this range of books is sadly lacking ive read 2 so far and both have been very disappointing...not only are the stories formulaic in worst kind of way but they lack any of the humour or thrills of the tv series the characterisations of mulder and scully are bland and lacking and the reader totally kills any resinance to the show with his dull lifeless reading he doesent even try to capture any of the subtlety of the characters we have grown to love
a real missed opportunity

Classic Xfile material. Great story and easy listening. Well read and worryingly might be based on some truth!

What a great story, I always watched the X-files on TV and this was just as good.

Listen at a higher narration speed!

I have an abridged copy of this story on cassette, read by non-other than Scully herself; Gillian Anderson. But at only 2h45m in length, it's had to ignore the fact big chunks of the story are missing, so I was keen to give the whole thing a listen.

Unfortunately the differences in performances between Gillian and Patrick are also hard to ignore. Patrick Lawlor is a very clear and precise narrator, he enunciates. Every. Word. But this comes at the expense of pacing and characterisation, which are glacial and lacking personality respectively.

Listening to it at 1.2x speed helps a bit, but I still found it to be something of a slog to get through. Being an X-Files fan back in the day I'd like to continue with the rest of the series but since the other titles also have the same narrator, I'm not sure that I will.

As for the story, it's an amiable enough mystery involving the testing of an experimental nuclear weapon and the strange deaths of scientists connected to the project. The final reveal is - even by X-Files standards - a little silly, so you're more likely to be chuckling to yourself than chewing your fingernails by the end.

Probably for devotees of the TV show only

I hoped this would provide a compelling introduction to the series and the characters and listened to the first two chapters. I found the writing clunky (too much ‘tell’ and not much ‘show’) and way too much emphasis on what the women look like and what they are wearing, which doesn’t serve to advance the plot or develop characters.
If you lioe the TV show they you should give this a go, otherwise , read some Ann Lecke or Mary Robinetterie Kowall.

I did not enjoy the narrator's vocal performance, He woulf also be too soft most of the time.
I did not feel engsged to the characters, almost as if the author depended on using the names Fox snd Mulder all the timenl. I have not watvhed the show, so only knew of it/them by name

Couldn’t finish. Feel it’s unfair to ride on the coattails of a TV legends but then fail miserably at matching the quality - both in story and delivery.

The writing and performance embody the spirit of the TV show perfectly. The way the story unfolds and the portrayal and interaction of the characters make it easy to visualise this unfolding as an episode of the X Files.

I have read several Kevin J. Anderson books because he keeps getting contracted to write books for franchises I like, however, I am not a fan of his style.
I find his dialogue clunky, and stilted. The plots always seems to revolve around a bigger super weapon. This book is no except to that.
There are some interesting ideas in this book but it's undermined by the very 'male author' tendency to write about a woman's breasts for no valid reason.
Seriously, there's a scene where apropos of nothing he refers to a female character who "...crossed her arms over her small breasts and stood confident."

She's not naked. It's not a romance scene. It's literally just an office meeting and he starts talking about how small her breasts are. WTF??

The audiobook narrator however is great, and does a good job with what he is given in this audiobook.