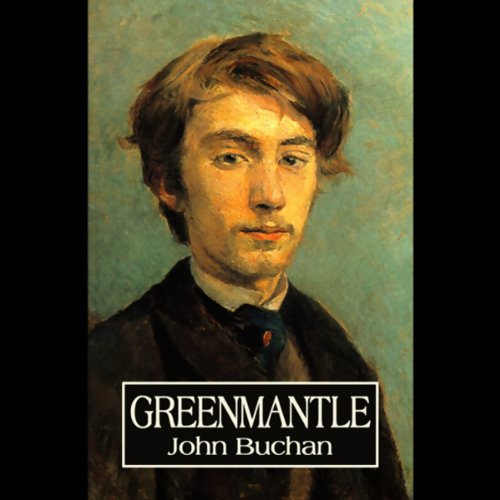 In Greenmantle, Richard Hannay, the South African mining engineer and war hero first introduced in Buchan's The Thirty-Nine Steps, travels across war-torn Europe in search of a German plot and an Islamic messiah.

He is joined by three others: John S. Blenkiron, an American who is determined to battle the Kaiser; Peter Pienaar, an old Boer Scout; and the colorful Sandy Arbuthnot, who is modeled on Lawrence of Arabia. Disguised, they travel through Germany to Constantinople and the Russian border to confront their enemies, the hideous Stumm and the evil beauty Hilda von Einem. Their success or failure could change the outcome of the First World War.

"A specialty audio, a classic, but definitely a 'thinking man's audio'. Bravo, Blackstone Audiobooks, which seems to find these gems!" (KLIATT)

At least about this. “Between Kipling and Fleming,” he said, “stands John Buchan, the father of the modern spy thriller.”

And a nameless officer serving on the Western Front offered this endorsement: “It is just the kind of fiction for here. One wants something to engross the attention without tiring the mind. The story is greatly appreciated in the midst of mud and rain and shells, and all that could make trench life depressing.”

Finally, this bit of analysis from someone at the London Telegraph: “[Buchan] understood that in a thriller…what matters above all is to keep the reader focused on what is going to happen next…It doesn’t matter that the reader has no clue where he is being taken or, when he gets there, how the thing happened as it did. All that matters is that once you’ve started, you can’t put the book down.”

The viewpoint that fascinates me most is from that line officer at the front. Granted, his comment was about Buchan’s first thriller, The 39 Steps. Nevertheless, it could apply the Greenmantle as well. It’s a neat trick to write about mortal danger in such a way that men who are living with it on a daily basis don’t chuck your book into No Man’s Land or, more likely, use it as necessary paper. Buchan treads a fine line when talking about the war. Yes, he and his hero are patriotic. There's a touch of Rupert Brooke here--soldiering is described as the only proper work for a man. And it's hard to remember, living as we do at the other end of the disastrous 20th Century, that soldiers cherish the camaraderie that grows out of shared dangers. Membership in a group of fighters who are also friends and the death of some of those friends makes war personal. It is a job that has to be done and there is pride in doing it well. Duty, as Ulysses Grant said, can be a beautiful word. War is hell but it isn't always hell. At the same time, Buchan and his protagonist never flinch from admitting the ghastliness of the Western Front. It's a combination of idealism and realism that may have done much to brace spirits at Ypres and the Somme--probably because it accurately reflected the general attitude in the trenches. As some of the poems quoted in Martin Gilbert's works on World War I attest, as bad as it was many believed in what they were doing in Flanders.

And our anonymous officer was right—like Dumas, the story grabs you and carries you along. So far from tiring my mind, I find Buchan (again, like Dumas) refreshes it. Unlike most who-dunnits I have in my audio collection, Buchan—along with Dorothy Sayers—will bear re-listening.

And the Telegraph makes a good point too. For all its improbabilities you accept the story and yes, you really can’t put it down. I attribute this to that same delicate mix of “real life” and spy thrills that Fleming was so adept at concocting. No doubt, as Hitchens suggested, he learned a thing or two from John Buchan.

Unlike 39 Steps, knowing a little history helps for this one. Fortunately, I recently read John Keegan's book on World War I and Gilbert's volume on the Somme offensive so when Richard Hannay met Enver Pasha or we hear that the effort at Gallipoli is being given up I wasn't completely at a loss.

I’m taking one star away from the usually superb Simon Vance (aka Richard Whitfield) for a slight tendency to trip up ever-so-slightly, every so often in the middle of sentences. I may be overly sensitive—part of my daily work is reading things aloud in phone conferences and I am a lector at church, so I know what it is to trip up ever-so-slightly. These slight catches didn’t distract my attention or detract from the tale, but they were wrinkles in an otherwise pitch-perfect performance.

This book had me sucked in. I couldn't stop listening to it. I started it whilst I was doing a few long drives for work, and had to take it out of the car and finish it up at home.

It may take a little time to adjust to the English, if you are not English. I've lived a fair amount of time in England, Canada and Australia, so it was not a problem. The book was published in 1916, so the language mirrors the time.

Greenmantle is the second book in the Hannay saga.

Would you consider the audio edition of Greenmantle to be better than the print version?

Not really, but it was pretty good. The narration was a tad slow, the ability of my Kindle to speed up the narration made all the difference in the world.

Yes. WWI was being fought and they had to make it completely across Europe, separately,and meet up some place behind the German lines and through the lines to get to the Turkish army.

That would be spoiler. Let's just say it was the Greenmantle.

I did listen to it all in one sitting.

It is a thriller. Not the best writing when compared to the thrillers of today. John Buchan was the Mickey Spillaine of his day. This is the beginnings of that genre.

John Buchan is one of my favorite authors. This recording was well read and very engrossing. I would very much like to see some of his other titles offered. Huntingtower would make a great soud recording as would John MacNab. Thank you Audible for your great service.

Where does Greenmantle rank among all the audiobooks you’ve listened to so far?

This story is the perfect sequel to The Thirty-Nine Steps. It's so well written it's easy to imagine yourself walking the same streets and living in pre WWI.

What other book might you compare Greenmantle to and why?

This is a story of espionage and I kept thinking back to Callan (book by James Mitchell, currently out of print) - a TV series from the 1970s. Like Hannay, Callan was an 'everyman' and a reluctant spy living in dangerous times.

What does Robert Whitfield bring to the story that you wouldn’t experience if you just read the book?

The reader really made the characters come alive. His accents were quite believable and not at all distracting (as some are in their 'awfulness'). I've listened to a couple of different readers 'do' this book, but Robert Whitfield is the best in my opinion.

The hero of The 39 Steps is at it again - in this 'sequel,' Richard Hannay is tasked by the British government to foil some far-fetched German plot that is all about a mysterious Islamic messiah ... he and a few others make their way across Europe during WWI in this pretty cool early thriller/spy/adventure yarn. While I prefer the far more concentrated effort of The 39 Steps, it was still enjoyable to be spending time in the company of Hannay once more. So, read The 39 Steps first - and if you've enjoyed it, then by all means snarf up Greenmantle, too. You'll enjoy it.

This book was the best book I have read in a long time. It is the best!

This is the book that Buchan was warming up for when he wrote the 39 steps. Its essentially the same story but bigger, more action, more travel and more chums...Have you seen the Will Smith film Bad Boys? Well this is Bad Boys two.
What I found surprising though was the comforting wisdom in it, the casts attitude to life, whats important and their struggles was gently inspiring.
Its not the best book ever but its a good solid piece of quality classic British writing.

Robert Whitfield excels in his reading of this John Buchan classic. I have to admit to a strong bias, I am a huge JB fan and this is a Wonderfull story, well read. I could easily start again.

Where does Greenmantle rank among all the audiobooks you’ve listened to so far?

It's a good book and I enjoyed it - I love the old-fashioned language of John Buchan's novels.

What other book might you compare Greenmantle to, and why?

The writing is dated, and it compares well with any of the other adventure / heroic stories of that era, but political correctness, in particular to 'foreigners' had not been invented at the time Greenmantle was written.

What does Robert Whitfield bring to the story that you wouldn’t experience if you had only read the book?

Robert Whitfield has the perfect well-spoken English accent for the book. And if some of his 'other' accents aren't quite accurate, it doesn't matter, it all works smoothly.

The language is old-fashioned and it would be possible to laugh at the book, but it's great escapism back to my childhood when my father used to read Buchan to us.

Execellent narration, really captures Hannay's voice as well as the supporting characters. Aside from 39 Steps this is best of the Hannay series.

The story has moments of brilliance, but is riven with howling moments that expose the racism of the time it was written in. It's an enjoyable adventure provided you can accept those times are behind us. If you can do that then it becomes a journey through a truly strange land.

The narrator does an excellent job except for the single worst South African accent I've ever heard in my life. Egyptian meets Scottish??!

Dated story but a great one.

Get past the racism, xenophobia, misogyny and imperialism and this is a great story. In its time this was a tale of patriotic daring do and it still is, but to a 21st century readership it is also a gateway into the way the world was and thought in 1916.