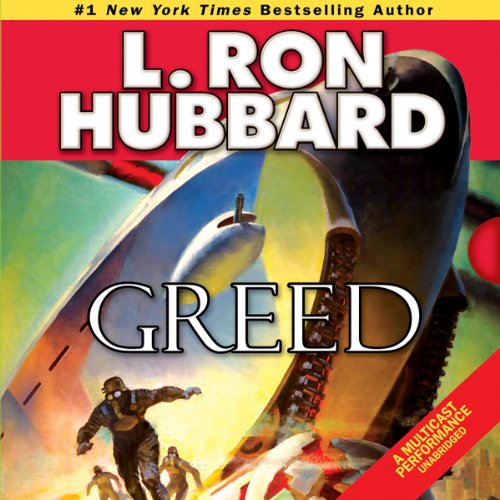 Is Greed good? The future of Earth and all of mankind may hang on that one question. And George Marquis Lorrilard - a space age ace-pilot, adventurer, and fortune-hunter - is just the man to answer it.

The world is divided between Asia and the United Continents - two great super powers locked in eternal warfare. But the balance of power is about to shift in Asia’s favor. They have developed a top-secret weapon - the cohesion projector-that could lead to annihilation on an unprecedented scale....

But as far as Lorrilard is concerned, the number one problem with the projector is that it stands in the way of his profits. Can he find a way to subvert the powerful weapon and resume his enterprising exploits? For millions of people on Earth survival may ultimately depend on the power of one man’s Greed.

Want thought-provoking intergalactic action, adventure, and suspense? Get all that and more as the audio version of Greed soars into thrilling new worlds of sound design.

Also includes the science fiction adventures, “The Final Enemy”, in which Earth discovers it faces a distant, yet devastating new foe, the identity of which is the most shocking blow of all; and “The Automagic Horse”, the story of a Hollywood special effects wizard who is about to apply his movie magic to a project that is out of this world.

Would you listen to Greed again? Why?

Sure, I already have, 3 times.

Interesting stories from the pulp era, some racism towards Asians, blacks, and in the last story towards Irish men in the movie business, who everyone knows is populated by people of the Jewish persuasion.

The horse winning and the movie business, from the Auto-magic horse.

Stories from the far edges of the universe to the your own backyard.