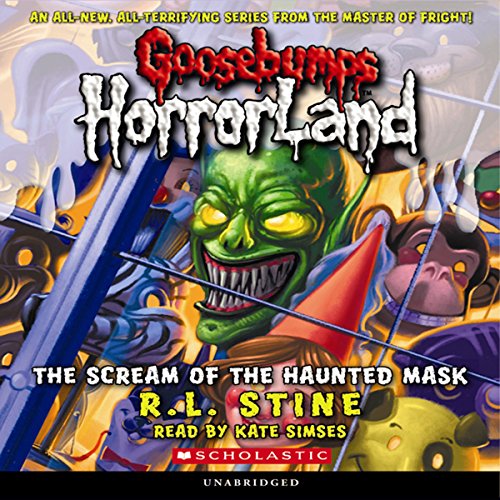 What should Carly Beth be for Halloween this year? TERRIFIED! Late at night, an ugly green mask is mysteriously calling out to her, and ugly green masks don't like to be ignored.

If Carly Beth survives the night, even a scary theme park might sound like a vacation. Or maybe not! At HorrorLand, every night is Halloween. And those monster masks? They aren't masks at all.

First Dud in the Series

(Note)
These books are a production. They are similar to classic radio story hours with sound effects, music, and dramatic, over-the-top voices. This is a series of updated and re-vamped R. L. Stine books. The formula is simple: kids experience mysterious supernatural events and (after overcoming the horrors) get invited to an amusement park called Horrorland. The final half hour of each book builds on an over-arching plot in Horrorland that encompasses all of the new characters and villains.

(About This Story)
Scream of the Haunted Mask is a sequel to The Haunted Mask, and this book assumes that you have already read the predecessor. Unfortunately, they do not give you very much details about what happened in The Haunted Mask--but I will: Carly Beth is bullied by two boys at school. She decides the perfect way to get back at them involves a scary Halloween mask, which she steals from a local shop. The mask has a mind of its own, however, and plans to take over Carly Beth's body. During Halloween, the mask takes over Carly Beth while she's out trick or treating with her best friend, Sabrina. In the end, she manages to defeat it by weakening it with a symbol of love.

In this story, Carly Beth has apparently kept the mask locked in the basement to keep others safe from it. Unfortunately, she can still hear its screams in her head. In the meantime, she works after school watching young children at a nearby farm and learns that the stables there are haunted. Whoever is haunting the stables appears to want the mask. Can Carly Beth stop it once and for all?

(Kid's Reaction)
My kid and I were both horribly confused with this story. Carly Beth talks about previous events that happened to her, but rather than being mysterious or peaking our interest, we both felt out of the loop--like when you've missed the first half of someone's conversation. We didn't know why she had this mask, what horrible events she had experienced with it, or what terrible powers it had.

Despite the lack of information, my stepdaughter liked the idea of working in stables and a daycare and thought the ghost story was neat. She gives a 3.5/5, but probably will never listen to it again.

I enjoyed this little story I am actually a 27 year old woman and i still find these books interesting.

I'm giving this 5 stars
And Carly Beth and Serena ARE SO SCARED!
Can they find a way to get her or he to tell the truth about that it is them

I liked it seems to be a good series to the classic haunted mask book
And Kate simses is a good reader.