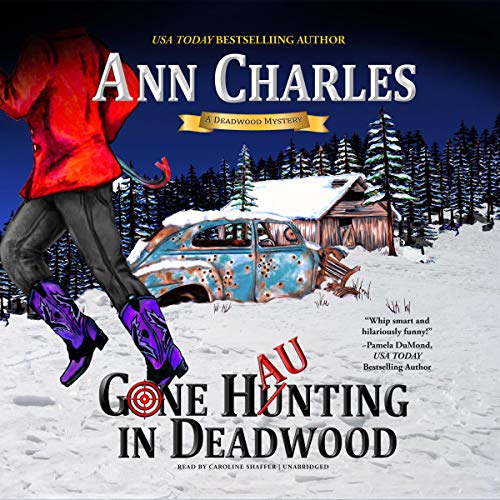 "Trespassers will be gutted and hung!" - Slagton's unofficial town motto

Normally, not even drunk on a bet would Violet Parker go to Slagton, a creepy ghost town inhabited by those too stubborn - or deranged - to leave. But a certain bullheaded Deadwood detective has a problem - his informant from Slagton has gone missing. When Violet is shanghaied into taking a hunting trip to the ghost town to search for the missing snitch, she stumbles into trouble that will take more than a double-barreled shotgun to escape.

Will Violet survive this new hell that haunts her, or will she end up on Slagton's growing list of those "gutted and hung"?

good addition to the series

the only thing I have trouble with is the degree of description in the sex scenes. I'd prefer less sex and more story. that being said, this one is good enough that I've listened to it multiple times and it is still gripping. this time they dig into Slagton and its inhabitants.

I love the story line, Violet, Doc, Harvey, Cooper, Natalie, and Aunt Zoe… however the chapters with Rex and Ray are so unbearable that I have to fast forward through them. The author has allowed this work place sexual harassment go on for 9 books with Ray! Then the violent ex Rex constantly harasses Violet and threatens her twins for now 6 books. I really want to know how the series ends but I’m not sure how much more I can take of Ray and Rex! It is so infuriating! Making jokes about work place harassment and domestic violence is not amusing.

Really, We get it, She does NOT want to be an Executioner.
The premise of the plot and world is a good, if cliche, the old, defend against any invading bad guys coming to the world, the ability to travel through ‘gates’ to other worlds. Dealing with new relationship issues, etc., it is simply the execution of it that falls very short, a major portion of which is in my opinion has a lot to do with the extremely weakly written main character.

The main character has zero training, and basically relies on Luck to carry her through each and every obstacle she faces from monsters to uncomfortable conversations. And for all intensive purposes, She isn’t very bright, constantly late on the uptake of whatever danger is happening around her, and several seconds late when it comes to her decisions of what to do about that danger. Not to mention, She is constantly attempting to make witty or sarcastically humorous comments, the majority of which are terrible and not remotely funny (reminds me of the cartoon characters, Beavus & Butthead and their level of very bad jokes, terrible timing/delivery, and simply adds no value to the plot, the cadence of conversation, or anything else, in my opinion. Ok, Omgosh! The Main Character is a flipping IDIOT! *rolls eyes*...I do not understand
the many other all positive reviews.

With her rag-tag band of merry friends (none of which are really fleshed out), and facing several direct and peripheral nemesis, the main character constantly stumbles along attempting to ‘keep the balance’, whatever that means. while trying to figure out what she should do. How to use the tools she is given, etc., etc. Speaking of which, the book alludes to the fact that bullets and guns have little to no killing effect against the monsters they face, and yet, everyone except the main character is given, carries, or uses a gun. But Nope!, not the main character, Her weapon of choice, either whatever is handy, from a crowbar to a stick, really, how much sense does that make to anyone?!

Fyi, You definitely want to read/listen to the books prior to this one, because You are going to be totally lost, as the Author makes constant reference to prior events and characters.

OVERALL:
I’m still trying to figure out just how much I like or dislike this book, and considering I am at Chapter 24 of 25 Chapters, that isn’t a good sign.

I think I will give this series a PASS!

I may try to Read/Listen to the next book in the series (only if it is Free!), just to see if this book is a fluke, and maybe the writing isn’t as bad as I initially think, then again, maybe NOT!

I absolutely love the humor in this series. The characters are so engaging and I want to know all of them personally. I would love to have loyal friends like that. Caroline Shaffer does a terrific job reading these books.

I like this series. The only issues that I have are that at this point in the series is that there is a lot of information that is repeating . I lose interest in the story when the information is repeated for book to book.

Dang this is getting more interesting

Hahah I did not pay attention to the time stamp and was caught off guard at the end. But dang if this isn’t getting more entertaining every book. I need to listen to the next one now. After all it’s almost Christmas

Not a single positive thing to say : No plot just stupid dialogue and dumber charters!

Not the best of the series

But still liked spending time with my favorite characters especially Harvey!! The 1st several books were more detailed and had more action this one kinda dragged itself through.

This is a Fantastic story. Violet and the gang are all back in action and there is plenty of that in this story. New friends and enimies and made. THere is still plenty of humour, Harvey is up to his usual shenanigans. THe love the characters have for each other, the gore factor goes up the scares get bigger. Some questions are answered and more are asked.
The naration is perfect Caroline Shaffer is excellent.